UTEP and Boise State have both looked disastrous on offense this season. With neither team inspiring confidence to back, we're targeting a bet that fades both feeble attacks for our college football betting picks.

It hasn’t been a great season for either program so far, as the Broncos lost handily to Oregon State in the opener before notching two easy wins. The Miners, meanwhile, hoped to build momentum after a 7-6 season a year ago. Instead, they have stumbled to a 1-3 start out of the gate.

Which team will earn a much-needed win on Friday night?

Check out our college football picks and predictions for the Boise State vs. UTEP on Friday, September 22 to find out.

Splitting games against the two New Mexico schools is never ideal. UTEP beat New Mexico State 20-13 in Week 2 and followed that up with a disappointing 27-10 loss to New Mexico a week ago. That leaves the Miners in a bad spot after starting the season 0-2 and now bowl eligibility looks like a long shot.

The offense really misses star wide receiver Jacob Cowing. One of the better deep threats in college football, Cowing fit UTEP’s offensive mold perfectly for a team that thrives taking deep shots with cannon-armed Gavin Hardison at quarterback. Cowing has 1,354 yards and seven touchdowns and is thriving already for the Arizona Wildcats, whom he joined via the transfer portal. While Tyrin Smith has stepped up with 437 yards and two scores this season, this offense lacks any dynamism.

The Miners are averaging just 14 points per game and are gaining 4.7 yards per play. Hardison has struggled to find his groove, completing just 48.4% of his passes for 6.0 yards per attempt. Considering he ranks first nationally in pass attempts (161), you’d hope to see more production and efficiency, but it just hasn’t been there for this offense in 2022. Red-zone offense has also been a concern, as they’ve come away with just two touchdowns on eight trips inside the 20-yard line.

The Boise State Broncos benched quarterback Hank Bachmeier in the opener after he threw two early interceptions. He’s responded with five touchdown passes to only one interception across his last two games — both wins — although this offense may be missing its dynamic receiving option in the passing game from a year ago, similarly to the Miners. There has been no replacement for Khalil Shakir, who had 1,117 receiving yards and seven scores a year ago. No Broncos player has topped even 100 yards this season, and running back George Holani leads the way with just 96 yards through the air. Another concern for the Broncos is the health of Bachmeier, who left last week’s game with an injury.

Both teams have struggled offensively. UTEP has managed just a 38% success rate overall and a 25% success rate on passing downs — which it has found itself in far too often. Boise State’s 43% success rate on offense isn’t great either, and it doesn’t appear poised to take advantage of where this Miners defense is most vulnerable —- through the air. The Broncos rank just 107th in passing downs success rate and have little firepower on other downs, ranking 105th in standard downs explosiveness.

UTEP should have trouble finding the end zone yet again in this one, while its defensive front is talented enough to contain a Boise State team that ranks just 102nd in offensive line yards.

This is a matchup between two teams that have been extremely unprofitable to back, going a combined 0-6-1 ATS to start the year. Yes, you read that right — neither side has found a single cover despite playing seven combined games. Something will have to give on Friday night, whether these teams are compliant or not.

UTEP has also been burning cash for bettors, going 0-4 ATS to start the season. The Miners haven’t found success against the Mountain West, going just 2-5 ATS in their last seven games against the conference. Home-field advantage hasn’t played a huge role, as they’re just 8-17 ATS in their last 25 home games. Dana Dimel bought some goodwill with the fan base after a winning season and bowl appearance a year ago, but things can trend downhill quickly and early returns on the 2022 season certainly aren’t great.

The Boise State program had high expectations when Tim Plough was named the offensive coordinator before the 2021 season. He joined the program after coordinating a UC Davis offense that ranked 22nd in the FCS with 433 yards per game in 2019, and there was hope he’d keep up those high-flying ways in Idaho.

Reality turned out to be pretty harsh, as the Broncos averaged just 29.2 points per game in 2021 — their lowest output since the 1997 season. For a program with such high expectations, it’s evident that this offensive unit and scheme simply aren’t up to par. This season hasn’t looked much different, with the Broncos mustering only 26 points per game. They’ve already benched the quarterback once, don’t have a single receiver who’s topped 100 yards, and are averaging just 3.5 yards per attempt on the ground.

UTEP is in a similar boat in that it hasn’t found success on the ground (74.3 yards per game on 2.6 yards per rush) or in the air (48.4% completion percentage, 6.0 yards per attempt for quarterback Gavin Hardison). The offense looks to pound the ball on the ground in order to set up deep shots via the air, but they haven’t proven capable of reliably executing that game plan in 2022. Boise State has a good defense that ranks seventh in success rate allowed at 38%.

The Under is 9-1 in Boise State’s last 10 games overall. Find more NCAA betting trends for Boise State vs. UTEP. 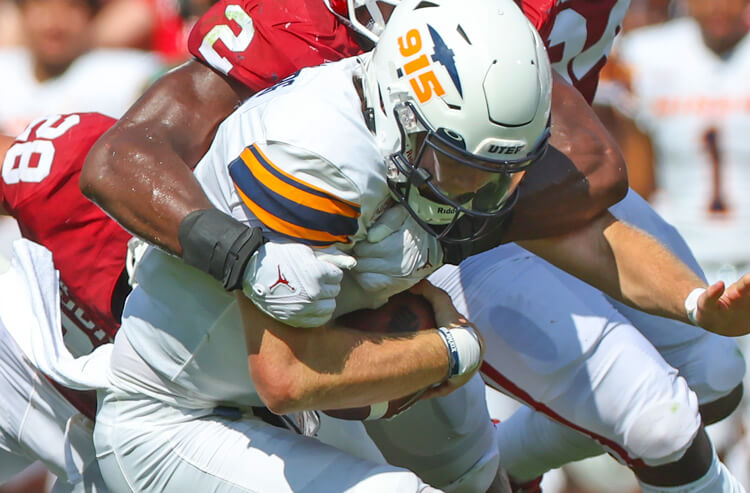