Arkansas vs Ole Miss Picks and Predictions: Razorbacks Run Their Way To An ATS Win

This SEC showdown will feature a pair of teams looking to rebound, after both Arkansas and Ole Miss dropped conference games last week. The road Hogs could add to the Rebels' misery — find out with our picks.

One of these SEC squads will manage to get back into the win column after ugly losses a week ago, as the Ole Miss Rebels and Arkansas Razorbacks meet in Oxford.

The Razorbacks beat the Rebels for the first time since 2017 last season but despite that, it's Ole Miss who is the college football betting favorite on Saturday.

Read on for our Arkansas vs. Ole Miss picks and predictions to find out if we like the Razorbacks to make it two straight against Lane Kiffin's rebels.

Ole Miss was a 5-point favorite when this game hit the market, and the Rebels are now either -5.5 or -6 points across all books at the time of writing. Meanwhile, the total has ticked up a half-point from 66 to 66.5. Use the live odds widget above to track any future line movements right up until kickoff and be sure to check out the full college football odds before placing your bets.

The Razorbacks are 6-2 against the spread in their last eight games following a straight-up loss. Find more NCAA betting trends for Arkansas vs. Ole Miss.

Both Arkansas and Ole Miss are coming off of blowout losses last week, but those games were against Georgia and Alabama — easily the two best teams in the nation. With that in mind, we shouldn’t let those results play a big role in determining how we view each of these programs. And despite that, it does seem like the oddsmakers are overreacting to the Razorbacks failing to score in a 37-0 loss to the Bulldogs.

While getting shutout is never good, Arkansas was facing a Georgia team that looks historically good. The Razorbacks did score only 20 against Texas A&M the week before but a lot of that was because QB K.J. Jefferson was banged up. Overall, this is not an offense that fans need to worry about. Even with two complete offensive duds in a row, the Razorbacks are still averaging 416.4 total yards per game, which is good for 55th in the country. With Jefferson a bit healthier, look for Kendal Briles to have this group humming again — and don’t be surprised if Ole Miss’ defense isn’t able to get many stops here.

Last week, the Rebels struggled to contain the Alabam rushing attack, getting gouged for 210 yards and four touchdowns, and Arkansas will look to replicate that approach to keep the Ole Miss offense off the field and wear the defense out. Look for the Razorbacks to get a lot of backs involved in this one, but Trelon Smith is the one that will do the heavy lifting. On top of that, there will be plenty of read-option plays with Jefferson being utilized as a runner, and it also wouldn’t be surprising if there are some packages for backup quarterback Malik Hornsby, who is arguably the fastest runner on the team.

Defensively, the Razorbacks aren’t going to be able to slow down Matt Corral and this Rebels offense. This game is going to be a shootout and it’ll be up to Arkansas to strike back whenever it can and then ultimately come up with a big stop or two when it matters most.

Barry Odom has done a good job of running this defense, so look for him to dial up the right call when it comes down to it. He does have some film to work off of after Alabama successfully stopped Ole Miss last week — the Tide were the first defense to give the Rebels trouble all year.

Despite this total drawing a pretty even split in terms of tickets, the number keeps getting higher and higher. That suggests that the sharp money is coming in on the Over, and that’s exactly in line with the type of game we expected as mentioned above.

While both of these teams have shown some serious improvements on the defensive side of the ball early in the season, these are two programs that still pride themselves on their ability to score points. Briles and Kiffin are two of the brightest offensive minds in college football right now and they’ll be able to get their teams rolling in this one.

Also, Briles used to work for Kiffin at Florida Atlantic, so there will definitely be a little friendly competition between the two of them here.

Since Kiffin arrived at Ole Miss, the Over is 3-1 in the four games in which his Rebels were home favorites. The Over is also 4-0 when Arkansas is coming off a game in which the team gained 125 or fewer passing yards in its previous game over the last three seasons. 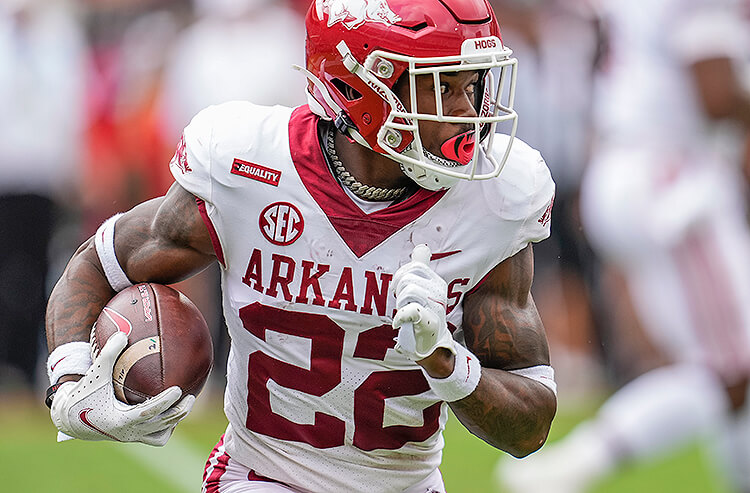 Arkansas vs Ole Miss Picks and Predictions: Razorbacks Run Their Way To An ATS Win
Provided by