Michigan vs Illinois Picks and Predictions: Wolverines Keep This One Close

The Wolverines have definitely underachieved this season, but they're in danger of falling below .500 and are being spotted plenty of points in a game in which they can compete. Find out why we trust them with our Michigan vs. Illinois picks.

The Michigan Wolverines will look to stay away from a .500 record when they take on the Illinois Fighting Illini Friday at 9 pm ET.

Just like most teams, the Wolverines had their bout with COVID and ended up losing their last two games against UCF and Rutgers.

After a 10-day layoff, the Wolverines are back in action and will look to get back on track against Illinois, who, on the other hand, has won 10 of its last 11 games and three straight conference games.

Will Illinois make a statement against a potentially rusty Michigan team? Here are our college basketball picks and predictions for Michigan vs. Illinois on January 14.

Illinois opened up as a 7.5-point favorite but have now been bet all the way up to a 9.5 point favorite. The total, however, hasn’t moved at most books since opening at 145.

Under is 5-1 in Wolverines’ last six road games vs. teams with winning records. Find more NCAA betting trends for Michigan vs. Illinois.

Michigan vs Illinois picks and predictions

After a 10-day layoff, nobody knows what to expect out of the Wolverines. Michigan is in danger of falling to .500 on the season and already lost three of its last four games to weaker competition.

But if you look at the stats, Michigan is still in the Top 50 when it comes to offensive and defensive efficiency.

The Wolverines have shot an effective field goal percentage of 52.9% while hitting 34% from long range and 53.8% from inside the arc.

It certainly won’t be easy for Michigan inside, knowing Illinois has held opponents to 42.5% from two-point range, but Michigan should be able to get some quality looks from outside, with Illinois allowing 32.7% from deep this season.

Illinois really isn’t a threat to force turnovers, as the Fighting Illini have only forced 15.7% of takeaways this season. For Michigan, not turning the ball over while taking good looks will be crucial.

Neither team is going to force a whole lot of turnovers, but Illinois can get careless, turning the ball over 20.4% of the time. Illinois will need those second chances due to all of the turnovers they’ve committed this season.

I know bettors are worried about Michigan coming off a 10-day layoff, but if you’re going to give Michigan 9.5 points in this game, I’m going to have to take it.

I don’t doubt that Michigan will be rusty. The game might start off sluggish for Michigan, but it could also be a poor start from Illinois as well.

Illinois only beat Nebraska by 10 last week and struggled to get in rhythm throughout the entire first half.

Granted, that was a road game, and this game will be at home, but I could see both offenses struggling early in this game.

Both defenses are also in the Top 50 in defensive efficiency via KenPom. You can be rusty shooting the ball and there will be games with some terrible shooting, but the defense never changes. You can’t be rusty with effort.

That’s why they say defense wins championships! Anyway, I’ll take the Under here.

I’m going to take Michigan here as my best bet. The line opened at 7.5 and has been bet up to 9.5. At this point, for a Michigan team that has so much talent, I can’t see the Wolverines losing this game by double-digits.

The Wolverines have defended the three very well this season and have the bodies to compete down low against Illinois on the glass and in the paint. 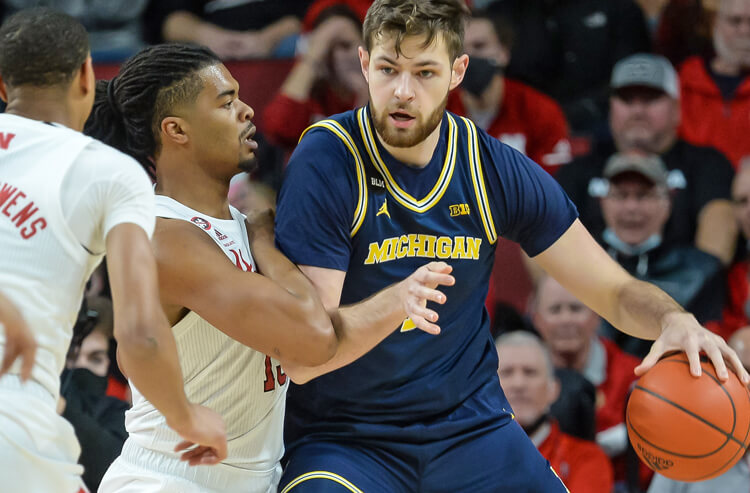 Michigan vs Illinois Picks and Predictions: Wolverines Keep This One Close
Provided by