The ACC Tournament tips off when the No. 12 seed Pittsburgh Panthers take on the No. 13 Miami Hurricanes in the opening round in Greensboro, North Carolina on Tuesday afternoon.

Pitt backs into the conference tournament with only two wins in its last eight games, but the Panthers have been flashing some college basketball betting value at 4-3-1 ATS in that span despite losing two top players to sudden transfers. Miami, meanwhile, snapped a six-game slide with a win over Boston College in the season finale, going 3-3-1 ATS in its last seven.

Here are our NCAA basketball betting free picks and predictions for Miami vs. Pitt on March 9.

The total has gone Under in seven of the last eight in the head-to-head matchup. Find more NCAA betting trends for Miami vs. Pittsburgh.

Miami has had an uphill climb for most of ACC play, battling through a long list of injuries and having a rough run of opponents to cap the conference sked. The Hurricanes ran just two deep into the bench for Friday’s win over Boston College which came following a four-game stretch against Virginia, Clemson, Florida State, and Georgia Tech.

The Senior Night victory over the Eagles last week could set up a letdown for UM, which is winding down a very trying season in which many of its top contributors were lost to injuries, leaving the scrappy Canes to lean on role players and underclassmen - on top of the grueling demands of a COVID-19-impacted season.

Pitt plays a very physical brand of basketball, hitting the boards – and opponents – hard. The Panthers rank 32nd in the nation in rebound percentage, most notably on the offensive end (28th), and commit 17.4 fouls per game (second in the ACC). That bruising attack is led by 6-foot-6 forward Justin Champagnie, who averages more than 18 points and 11 rebounds a contest.

Champagnie had 10 points and nine rebounds in just 24 minutes due to foul trouble in Pitt’s previous meeting with Miami, but the Panthers still rolled to a 70-55 victory back on December 16. Of course, Jeff Capel still had recently transferred Xavier Johnson and Au’Diese Toney on the roster at the time.

Expect the Hurricanes to put up a fight in the first half but just not have enough left in the tank to tangle with the Panthers for 40 minutes.

Neither team is an offensive powerhouse and Miami has been forced to play a plodding pace due to a lack of reserves. The Canes rank 200th in tempo and, outside of Friday’s 80-point effort against lowly BC, have scored 51, 58, 60, and 61 points in four of the five games before the season finale.

Pitt’s offense is still sorting out the pieces after the sudden departures of three-year starters Johnson and Toney, who decided to transfer last week just before the end of the conference schedule. Johnson was averaging 14.2 points and a team-high 5.7 assists while Toney averaged 14.4 points and 5.9 rebounds a contest – a collective 40 percent of Pittsburgh’s total offensive output.

Heading into Tuesday’s ACC Tournament opener in Greensboro, the Panthers are 3-5 Over/Under away from home this season while the Hurricanes are 2-7 O/U outside of Coral Gables. 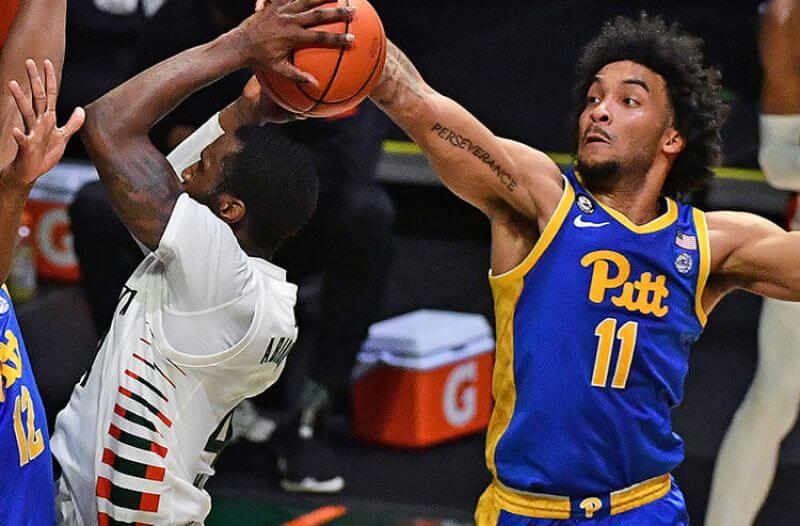