No. 4 Illinois has a shot at one of the top seeds in the NCAA Tournament, but a loss to No. 10 Ohio State might prevent that. The two teams will meet at Value City Arena in Columbus, Ohio on Saturday, March 6, tipping at 4:00 p.m. ET.

Will the Buckeyes spoil the Fighting Illini’s party? Keep reading our Illinois vs. Ohio State picks and predictions to get all the facts heading into this one.

Editor's Note: This preview was published prior to Saturday afternoon's news that Ayo Dosunmu will be active for Illinois.

Shortly before tipoff, Ohio State is a 2-point favorite at FanDuel, the same as the opening number, after moving to -1.5 briefly Friday night and reaching -2.5 early this afternoon. As of 3:30 p.m. ET, ticket count is dead even, and the Buckeyes are taking 61 percent of money on the point spread. The total bounced around within a small window, from 150 to 151, then down to 149.5, and it's now back at 151, with 64 percent of bets/71 percent of cash on the Over.

Illinois and Ohio State met on January 16 and the Buckeyes won that game, 87-81. Ohio State comes into this one on a three-game losing streak, but that win should give the team confidence that it can get the job done here. Also, the uncertainty of Ayo Dosunmu is crucial. Dosunmu is one of the best guards in the nation, and it seems unlikely that he’ll play in this game. And even if he does, the team might struggle to incorporate him. Even if that wouldn’t last a whole game, it might mean a poor start and an opportunity for Ohio State to take advantage.

One big factor in this game is the fact that the Buckeyes like to play a little small. Ohio State has a few bigs that primarily play away from the basket, and that means that the team will be able to pull Illinois center Kofi Cockburn out of the paint. Cockburn is a dominant throwback center, but he won’t be as effective guarding guys in space. He was also 7 for 7 from the floor in the last meeting between these teams, but it didn’t end up hurting Ohio State because it was able to get up and down the floor and put him in positions that made him uncomfortable. The Buckeyes will likely play fast here, and their outside shooting will ultimately determine the outcome.

E.J. Liddell is a player to watch in this game, as he had 26 points and seven boards the last time they met. He’s capable of scoring at all three levels, and his size makes him a matchup nightmare for most teams.

The last meeting between these teams had 168 points scored, and this game could similarly turn into a shootout. Even if Dosunmu is out of this one, the Fighting Illini are capable of scoring. They put up 76 in a win over Michigan last game, with Trent Frazier and Andre Curbelo combining to score 39 points.

Meanwhile, Ohio State has the fourth-ranked adjusted offense in college basketball (according to KenPom.com), so this team is likely putting up big numbers against whoever it plays. 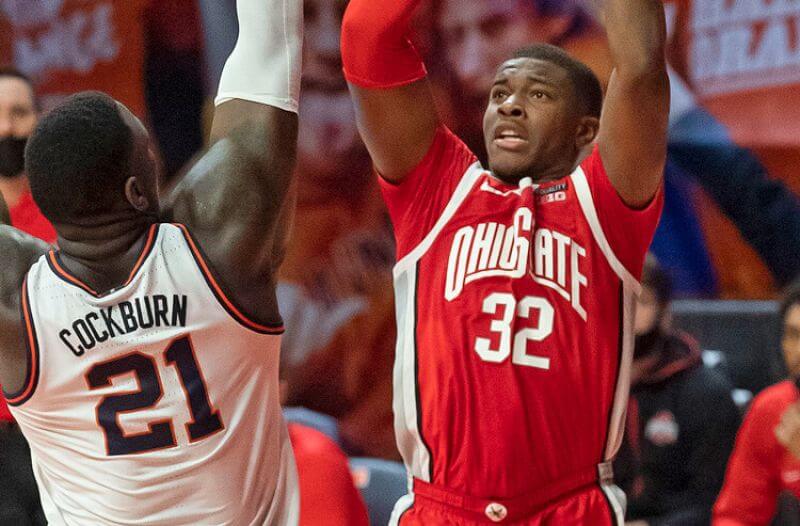