Connecticut vs Michigan State Picks and Predictions: UConn Too Strong

Ready for a defensive grind? Two elite programs with lock-down units clash in Atlantis for a Thanksgiving matinee. But only one of these sides will challenge the other's defense — find out which with our Connecticut vs. Michigan State picks.

The Connecticut Huskies are currently 5-0 after a huge win against Auburn in double overtime to start the Battle 4 Atlantis Tournament. Now, they’ll look to continue winning going up against a 4-1 Michigan State Spartans team that is currently 4-1 on the season.

The Spartans’ only loss was against a really good Kansas squad, 87-74. Since that loss, Michigan State has reeled off four straight victories.

Will Michigan State be able to take advantage of UConn playing a double-overtime game yesterday? Here are our college basketball picks and predictions for the semifinal game between the Connecticut Huskies and the Michigan State Spartans.

Michigan State opened as a -1 favorite and has stayed around that number at most outlets. The total has also stuck around 141.5 since opening.

Connecticut: None.
Michigan State: None.

Huskies are 6-1-1 ATS in their last eight games vs. a team with a winning percentage above .600. Find more NCAA betting trends for Connecticut vs. Michigan State.

The Connecticut Huskies finally passed their first test of the season. After facing a bunch of lower-tier teams to start the campaign, Connecticut was tested against Auburn and found a way to win a double-overtime game that probably never should’ve gotten to that point.

The Huskies have been fouling at a high rate, but that can be a byproduct of their pesky defense. The Spartans currently rank 29th in adjusted defensive efficiency and have forced 26.6 percent turnovers per game. The Huskies have also held opponents to 28.7 percent from downtown and 39.7 percent from inside the arc.

With Michigan State shooting just 30.9 percent from long range and turning the ball over 21.7 percent of the time, Connecticut could have some success defensively in this game.

On offense, the Huskies have shot an effective field goal percentage of 57.1 while earning 42.6 percent of offensive rebounds per game. The Huskies are one of the best teams in the nation on the offensive glass but they’re also able to shoot the long ball at 43.6 percent.

Connecticut doesn’t shoot a high volume from three, but when threes go up, the ball is usually either going in the net or finding a Connecticut player for a second chance opportunity.

The Spartans have played solid defense to start the season. They’re holding teams to just a 41.3 percent effective field goal percentage while allowing just 38.1 percent from inside the arc.

All in all, this could be a terrific game between two elite programs. However, UConn should be able to win the rebounding game, shoot better and force more turnovers. So, with that, I’ll take Connecticut +1.5.

Both of these defenses are in the Top 30 when it comes to adjusted defensive efficiency, with the Spartans sitting at third in the nation. While Connecticut has dominated the glass, it’ll likely have to put up more of a fight today. The Huskies will still win the rebounding battle but don’t think they’ll earn 42.6 percent against Michigan State.

These teams will both use plenty of their bench throughout the game to keep their legs fresh, which mainly helps the defense more than the offense. Starters Adama Sanogo and R.J. Cole are the best scorers for Connecticut, however, they only play 30 minutes or less a night.

Depth for both of these teams pays dividends on the defensive end.

I’ll stick with Connecticut at +1.5 for my best bet. While Michigan State is deep, their offense hasn’t been all that impressive. Only four players on the Spartans are averaging more than seven points a night.

Michigan State is turning the ball over 21.7 percent of the time and shooting just 30.9 percent from long range. In a tight, closely contested game, those two areas will be the difference between winning and losing for bettors.

Did you know that if you parlayed our Connecticut vs. Michigan State picks, you could win $26.45 on a $10 bet? 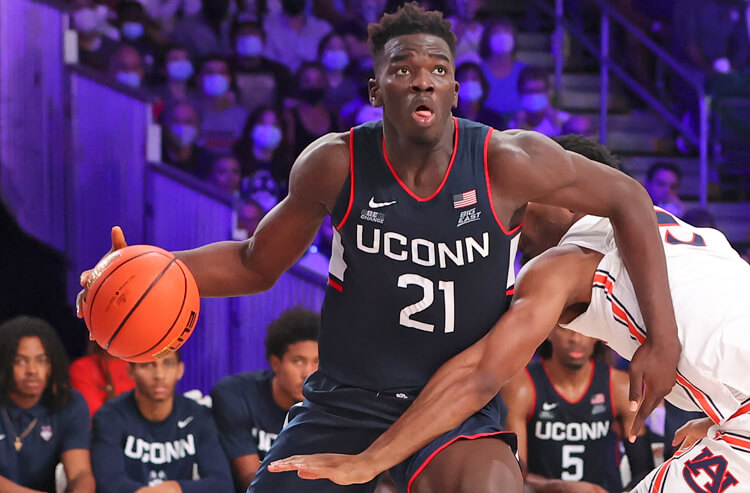 Connecticut vs Michigan State Picks and Predictions: UConn Too Strong
Provided by