The Rams can hold teams down on defense, but they'll struggle to score on most nights, let alone with the reigning March Madness champs. Find out if there's any hope for them against this big spread with our VCU vs. Baylor picks.

On Thursday, the VCU Rams take on the Baylor Bears in a semi-final matchup at the Battle 4 Atlantis. This Thanksgiving showdown features two teams that are coming off impressive victories, as VCU earned a win over the Syracuse Orange and Baylor beat up on the Arizona State Sun Devils.

Which of these teams will advance to the finals of this tournament? You’ll want to keep reading our Baylor vs. VCU college basketball picks and predictions for Thursday, November 25 to find out.

Baylor opened as an 11-point favorite against VCU in the Battle 4 Atlantis, but the defending national champions are now laying 12.5 at most sportsbooks. The total in this game was 129.5 when it first became available, and the number is now sitting anywhere from 129.5 to 130.5

VCU is 1-8 against the spread in its last nine games following an against-the-spread win. Find more NCAA betting trends for VCU vs. Baylor.

VCU vs Baylor picks and predictions

Both of these teams are coming off impressive victories on Wednesday, but it’s worth noting that Baylor’s victory over Arizona State helped Scott Drew’s team move to 5-0 on the season. The Bears are also 3-1-1 against the spread on the year, while VCU’s 12-point win over Syracuse made the Rams only 3-2 straight-up and 2-3 against the spread this season. VCU has already suffered some bad losses this season, with the team coming up short in games against the Wagner Seahawks and Chattanooga Mocs. Those two losses are a big part of the reason that the Rams are getting double digits in this one, but it realistically doesn’t seem like enough points.

The one thing that VCU does extremely well is defend, as the Rams are currently 14th in the nation in adjusted defensive efficiency (all efficiency stats from KenPom.com). The Rams are, however, ranked 241st in adjusted offensive efficiency and they’re averaging only 54.0 points per game, which is downright disastrous. Sure, the Rams might force the Bears into some difficult shots — and their pressure could cause Baylor to turn the ball over a few times — but VCU just doesn’t have the scoring power to hang around in this game.

While Baylor lost some key starters from last year’s championship team, the group still has Matthew Mayer and Adam Flagler. Both of them played key roles in helping the Bears win it all, and they now have bigger roles with this year’s group. However, Baylor also has Arizona transfer James Akinjo at point guard. Akinjo has been the Bears’ best player as he is averaging 10 points, 7.8 assists and 2.6 steals per game. He’s getting himself into the paint and making all the right reads with the basketball. And LJ Cryer, who barely played for Baylor last year, is averaging 17.8 points per game this year. He’s leading the team in scoring and shooting 60.3 percent from the floor and 54.8 percent from deep.

Overall, there’s a lot of offensive firepower on Baylor this season. And even though the Bears are facing a tough defense, a good offense tends to beat a good defense any day of the week. Don’t be surprised if this one gets ugly for VCU.

Baylor has played some games that have been on the low-scoring side this season, but none of them have gone Under the number on this game. This mark is just absurdly low for a team with the offensive talent that the Bears possess. Baylor has scored at least 86 points in four of their five games this season, and scoring 80 points would mean that VCU only need to hit the 50-point mark in order for Over bettors to cash in on Thanksgiving.

For what it’s worth, the Over has hit in 16 of Baylor’s last 22 games as a favorite. It’s also 9-4 in the last 13 games in which the Bears have been favored in a neutral-court game.

This VCU defense will be the toughest one that Baylor has faced all year, but the Bears are averaging 85.8 points per game and are currently sixth in the nation in both adjusted offensive and defensive efficiency. So, not only is this team capable of putting up points against anybody, but they should also be able to stifle a Rams offense that has looked completely out of sync to open up the year.

It’s also worth noting that you can’t put a price on the experience that Baylor got in the NCAA tournament last year. For guys like Flagler and Mayer, playing in a tournament like this is a breeze compared to the pressure they faced in the postseason. Speaking of Mayer, don’t be surprised if he comes out of his slump in a big way very soon. He’s shooting just 25.0 percent from deep this season, but he shot 39.5 percent a season ago and 37.8 percent a year before that. 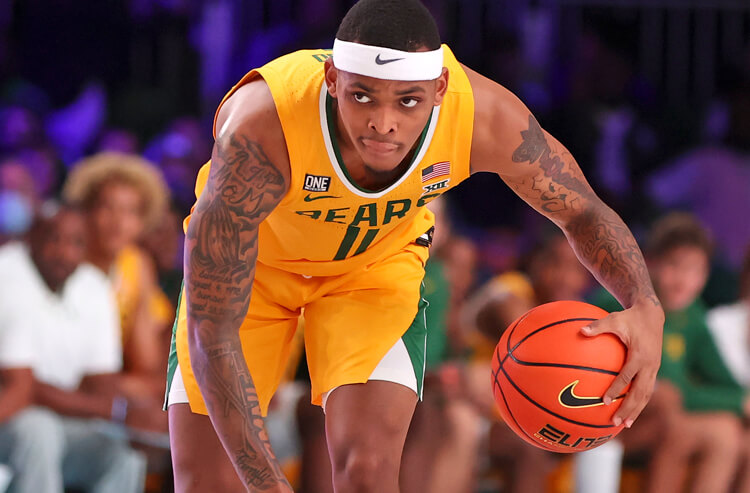