Many college basketball programs lost their continuity after the disrupted 2019-2020 season because of extended eligibility rules and player transfers. College basketball bettors have had to adjust their strategies.

With that in mind, we look at teams to watch in the Big 12 conference as the 2021-22 season picks up steam.

The Big 12 showed up in a very big way in 2021. Five of the top 16 seeds awarded heading into last year’s March Madness were from the Big 12, tying the Big Ten in such appearances and with all other conferences trailing those marks significantly (the next highest being two by the SEC and ACC). Headlining that group was Baylor, who not only won the national championship but also possibly more importantly handed Gonzaga their only loss last year and their first loss since February of 2020.

The Big 12 is looking to be no different this year with seven (yes, seven) teams in the projected top 50, including teams you’ll see in the top half of the poll all season long.

The reigning national champions will try their best to run it back while replacing the ninth (Davion Mitchell) and 40th (Jared Butler) overall draft picks in this year’s NBA draft. Mitchell deservedly was a lottery pick given his ability to score (15.9 PPG), create for others (5.5 APG), and be a perimeter threat (44.7 3P%).

Losing a player like Mitchell alone is hard enough to overcome, but Jared Butler was just as good in his own right (16.7 PPG, 4.8 APG, 41.6 3P%). But that’s not all: Macio Teague also departs and takes with him his scoring reliability (15.9 PPG, 39.5 3P%). What makes their departures even more insurmountable is that they were all fantastic two-way players.

Scott Drew’s answer at the guard position is Arizona transfer James Akinjo. Akinjo is arguably one of the best transfer grabs in the conference and possibly the nation. After transferring from Georgetown to Arizona last year, Akinjo markedly improved from deep (24.2 to 40.8 3P%), which opened up his game and led Arizona in scoring with 15.6 PPG. However, his mid-range game left a lot to desire, and improvement there could be huge for Akinjo’s development and Baylor’s outlook.

The other essential addition to the Bears is five-star forward Kendall Brown, who brings an awe-inspiring athleticism. Brown is undoubtedly still raw in several aspects of the game. Still, if there’s one upside to the departure of Mitchell, Butler, and Teague, it’s that Brown will have plenty of opportunities to develop. But in the end, Brown (and Akinjo) are not enough to keep Baylor in a realistic position to repeat.

If you want to talk about prized transfers, Kansas coach Bill Self has them this year. Arizona State transfer Remy Martin (19.8 PPG) is a crafty scorer who has mastered the art of fearlessly attacking the rim. In 2020, Martin averaged 6.1 free throw attempts, good for 27th among guards, and hit them at a 78 percent clip. But despite all of his scoring acumen, Martin will have an equally immense responsibility of piloting the offense and distributing the ball, especially given that last year’s assist leader only averaged 3.7 assists per game and is gone this year (Marcus Garrett).

That offensive engine in need of a bit of oil includes the trio of Ochai Agbaji (14.2 PPG), David McCormack (13.4 PPG), and Jalen Wilson (11.8 PPG). The three led the team in scoring this year but left a lot of meat on the bone, given how the only consistent thing about the offense was how often it stalled.

Joining them is Drake transfer Joseph Yesufu, who flashed in his sophomore year in his first real complement of minutes in his career, averaging 12.8 PPG while shooting 38.4 percent from three. Yesufu provides depth and stability to Kansas’ perimeter scoring, which Iowa State transfer Jalen Coleman-Lands will bolster. 25-year-old Coleman-Lands enters his seventh college year with a 10.5 PPG and 37.2 three-point percentage career average.

Following last year’s disappointing (and embarrassing thirty-point) second-round exit in the tournament, it’s easy to look at Bill Self’s offseason roster construction and draw a conclusion. The exactness of that conclusion varies from your perspective, as it very vividly dances a line between urgency and desperation. Which of the two we’ll attribute to it in hindsight depends entirely on the experiment’s outcome.

Shaka Smart also felt the sting of a disappointing second-round tournament exit and decided to leave to coach Marquette in the face of it. The Longhorns appointed Texas Tech’s Chris Beard as the next man in charge, and he very quickly raided the transfer portal to win over the adoration and trust of Longhorn fans.

In the process, Beard added five transfers to the Longhorns that averaged double-digit points last year.

Prolific scorer Marcus Carr (19.4 PPG, 4.9 APG) comes over from Minnesota and joins veteran starters Drew Jones (14.6 PPG) and Courtney Ramey (12.2 PPG) in the backcourt. That trio of guards alone would elevate most teams into a conference contender.

Tre Mitchell brings his 18.8 PPG and 7.2 RPG over from UMass and figures to play a prominent role early and often in the frontcourt. Utah’s Timmy Allen (17.2 PPG, 6.4 RPG), Creighton’s Christian Bishop (11.0 PPG, 6.4 RPG), and Vanderbilt’s Dylan Disu (15.0, 9.2 RPG) join the frontcourt Frankenstein and all figure to play roles this season.

It’s hard to look at the Longhorns’ talent and not have extremely high expectations. But, as it is with “superteams” in any sport, there will be growing pains at the start that Texas needs to endure to figure out precisely how the team looks. That may lead to some ugliness to start, but by the time conference play is in full swing, the Longhorns undoubtedly have a ceiling as high as anyone else’s.

Losing Mac McClung and Chris Beard in one swing is a very tough look. But much like their friends in Austin, the Red Raiders decided to address their offseason problems by raiding the transfer portal. If you thought the Longhorns adding five double-digit scorers via transfers was impressive, Texas Tech did the same. However, the Red Raiders’ haul didn’t come from as prolific of programs as the Longhorns — just one of their key transfers came from a Power 6 program compared to all five of Texas’.

Nevertheless, don’t scoff at Texas Tech’s additions. Mylik Wilson (12.9 PPG, 5.5 RPG), a highly malleable two-way guard, arrives from Louisiana poised to provide new coach Mark Adams the needed flexibility to sort out the rest of the roster. The equally versatile Terrence Shannon (12.9 PPG) and Kevin McCullar (10.4, 6.3 RPG) return to the backcourt and more importantly, are unselfish veterans who will help Adams see through his vision.

That vision includes Hampton star Davion Warren, who comes off a season averaging 21.2 PPG and 6.3 RPG. The Red Raiders have tied much of their aspirations to Warren’s ability to adequately provide production against much stiffer competition, and he is ready for it by all accounts.

Crucial frontcourt returner and redshirt senior Marcus Santos-Silva (8.3 PPG, 6.4 PPG) joins the complement transfers. Oral Roberts’ Kevin Obanor (18.7 PPG 9.6 RPG) and UTEP’s Bryson Williams (15.1 PPG, 7.4 RPG) were stars of their respective teams and conferences, but much like Warren, they have much to prove in the jungle that is the Big 12.

Much like Texas, Texas Tech’s ceiling is theoretically sky high. And much like Texas, early results may be a little unhinged as they hammer down rotations and scoring responsibilities. The Red Raiders will be a fun and fierce team to watch come spring if fresh-faced Mark Adams can see it through.

Other Big 12 teams to watch

In any other non-Big Ten conference, teams like West Virginia, Oklahoma, and Oklahoma State would deservedly require less brevity. But this is the nature of the stacked Big 12.

Throw in Huggins’ repeated demonstration of ingenuity and adaptability, and you have yourself a more than a decent second-tier contender.

Moser should keep the Sooners competitive and will begin to build a foundation of something special for years to come.

Oklahoma State suffers the most considerable loss in the nation: No. 1 overall draft pick Cade Cunningham. In light of that and following their disappointing tournament run, many are writing off the Cowboys.

To Oklahoma State’s benefit is that they return every other player. Many surprising sleeper teams emerge from this exact formula. Continuity and collective growth is a dangerous formula in college basketball. Follow it.

Use our NCAA basketball odds comparison tool to find the best odds on your Big 12 wagers.

UCLA Still Dominant in Pac-12, But Don’t Sleep On Oregon 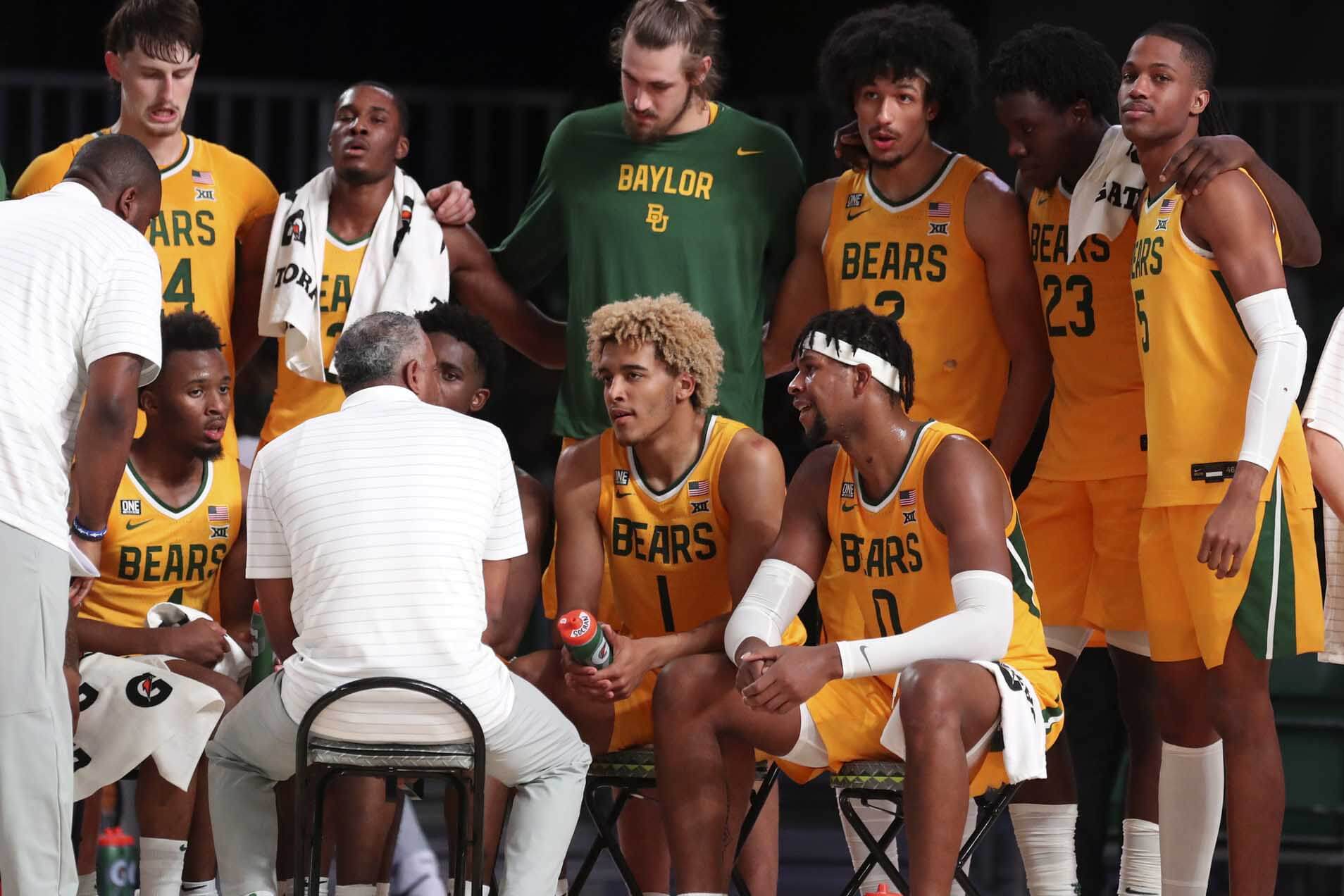