The Tigers had a stellar recruiting class, but so far, haven't put it together on the court. Find out if they'll get swept away as the Tide rolls down the Mississippi River — check out our Alabama vs. Memphis picks.

The No. 6 ranked Alabama Crimson Tide head to FedEx Forum to take on the Memphis Tigers in NCAA basketball action on Tuesday night.

College basketball betting lines opened with the Crimson Tide as 3.5-point road favorites. Memphis has an extremely talented squad but has struggled in the early going of the season, losing four in a row.

Can the Tigers cover the spread or will the Tide keep rolling? We let you know what we think with our best free Alabama vs. Memphis college basketball picks and predictions for Tuesday, December 14 with tipoff at 9 p.m. ET.

The Crimson Tide opened as 3.5-point favorites with the Over/Under at 156. The line briefly shifted as high as Alabama -5.5 before buyback on Memphis moved it back to -3.5. The total ticked down to 154.5.

The Over is 4-0 in Alabama's last four games overall. Find more NCAA betting trends for Alabama vs. Memphis.

Alabama vs Memphis picks and predictions

The Crimson Tide aren't just a football powerhouse anymore, with Nate Oats guiding the basketball program to an SEC title and a No. 5 finish in last season's AP Poll. They are off to a fantastic start this season and although they lost a shocker to Iona in November, they've won all eight of their other contests and are coming off back-to-back impressive victories against highly ranked foes Gonzaga and Houston.

Jumping out to a 16-point halftime lead against the Zags on neutral ground was impressive enough, but following that up by edging the Cougars by a single point thanks to some late-game heroics (and perhaps a missed goaltending call) showed their resiliency.

Alabama had to replace four starters from last season's squad, but former sixth-man Jahvon Quinerly has seamlessly fit in beside leading scorer Jaden Shackelford (19.1 points and 6.9 rebounds per game). Five-star recruit J.D. Davison has taken over the top role off the bench with 9.8 ppg, 5.2 rpg, and 4.3 apg, while another freshman, Charles Bediako, gives them a seven-footer that can alter shots down low.

Oats has transformed this team into a long, athletic group, that likes to run the floor and can shoot the long ball, averaging the second-most three-pointers per game (9.9) out of all Power Six conference schools.

Memphis entered the season with high expectations after another recruiting class coup by Penny Hardaway. Hardaway convinced a pair of elite talents in Emoni Bates and Jalen Duren to reclassify from 2022 and also signed forward Josh Minott, who was a Top-30 recruit according to 247Sports.

That freshman trio, along with returning upperclassmen Landers Nolley, DeAndre Williams, Lester Quinones, and Alex Lomax, should be one of the best teams in the country. Instead, they have dropped four-straight games and are coming off a 74-72 loss at home to Murray State. The Tigers really need to figure things out and it might be time to ask if Hardaway is actually a capable college coach or merely a fantastic recruiter.

The Tigers' offense is stale and has awful ball movement with guys just isolating and taking on opponents one-on-one in far too many situations. They are averaging just .935 points per possession over their last six games. They are also 350th in the country in turnovers per possession while also ranking outside of the Top 300 in personal fouls per defensive play. That sloppy play is no recipe for success against a team that is rolling like the Tide.

In recent weeks, the Tigers lost to middle-of-the-pack SEC programs in Mississippi and Georgia, we don't see them covering against the best team in that conference tonight.

The Tigers haven't been efficient on the offensive end of the floor and turn the ball over way too much, but they do rank a respectable fifth in the country with a field goal percentage of 46.7 while playing at the 13th fastest adjusted tempo according to KenPom.

The Tide also play at a blazingly fast pace, ranking 20th in adjusted tempo, and they shoot even better from the field, boasting a 48.1 field goal percentage (27th in the nation) and a two-point percentage of 58.3 (ninth).

Alabama is coming off consecutive games that saw at least 165 points scored and has now cashed the Over in four straight. Meanwhile, the Tigers are 5-2 O/U in their last seven games at home.

The only reason to even consider the Tigers in this one is that they have home-court advantage and the Tide could be in a bit of a letdown spot after that thrilling 83-82 victory over the Cougars.

That said, playing in front of home fans didn't help the Tigers out against tiny Murray State on the weekend when they squandered a 14-point halftime lead, and Alabama didn't suffer a letdown after beating Gonzaga last week. With one program looking like a national championship contender and the other looking like a lineup of me-first players in the middle of a crisis, getting the Tide at anything less than -5 seems like a bargain. 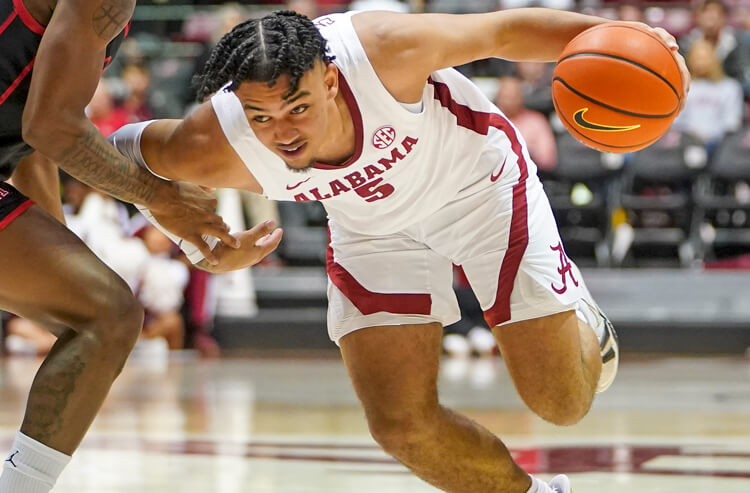