With the Dallas Mavericks on the brink, we can tap into their reserves to find value on the player props market tonight. We're especially bullish on Jalen Brunson eclipsing his points total after he dialed back his shooting in Game 3. 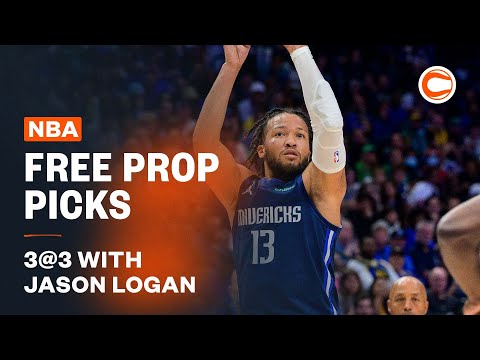 The Dallas Mavericks suddenly find themselves facing elimination in the Western Conference finals, falling behind 3-0 to the Golden State Warriors heading into Game 4 on Tuesday.

We go beyond the side and total for this high-pressure showdown in Dallas, giving our best free NBA player prop picks for Game 4 between theWarriors and Mavericks on May 24.

If the Mavs are going down, they’re going down swinging… the ball to the open guy on the outside for a barrage of 3-point takes.

Dallas’ trigger-happy triple approach is catching up with it, making just 13 of 45 shots from distance in a losing effort at home in Game 3, but I don’t see head coach Jason Kidd suddenly putting a cork in his team’s long-range shooting. The Mavs are what they are.

With guys like Davis Bertans, Reggie Bullock, and Maxi Kleber struggling from beyond the arc, reserve guard Spencer Dinwiddie could see his number called more often in Game 4.

Dinwiddie scored 26 points off the bench and was 4-for-10 from 3-point land in 32 minutes of action in Game 3, logging his most floor time since Round 1. He hasn’t been overly sharp from the perimeter in the series, but the Mavs will need Dinwiddie to make some momentum-shifting threes in Game 4.

He’s knocked down three or more 3-pointers in two of the three games in this series and in four of his last five outings going back to the conference semis. This Over pays plus money and Dinwiddie will have more than a few chances to top this prop in Game 4.

No bailin’ from Jalen

While most of the Mavericks ride or die from beyond the arc, the one consistent threat to the Warriors’ interior is Jalen Brunson. The burly point guard is averaging 21.7 points in the conference finals, including a big 31-point effort in Game 2.

Brunson has the hot hand coming into Game 4, shooting a collective 18 for 31 the past two contests including a much improved 8 for 13 from beyond the arc in those outings.

Brunson, however, isn’t dependent on triples to pick up points like his teammates, with his first move always being toward the rim. He ranks eighth in points in the paint among all postseason players and is shooting more than 40% of shots within eight feet of the basket.

The Warriors are without versatile 6-foot-8 defender Otto Porter Jr. for Game 4 and will be running much smaller off the bench with minimal rim protection outside of Kevin Looney. For all their ups and downs from distance, the Mavericks are still shooting 52.5% on 2-point field goals for the series.

Brunson finished with 20 points in Game 3 but shot the ball just 12 times, which tied his lowest attempt total of the postseason. He’s averaging more than 18 shots per game in the playoffs overall and will be vital to Dallas avoiding elimination, especially if the Mavs can’t drain attempts from beyond the arc again.

Not easy being Green

Draymond Green is a glue guy for Golden State and does whatever the team needs to get the job done. So far in the Western finals, Draymond’s role has primarily been agitator and hype man as his statistics have dipped compared to the past two series.

He’s dished out totals of three, five, and five assists so far, and his assists total for Game 4 is sitting at 6.5 with the Under a loaded -160 at some books. His work on the glass produced nine rebounds in Game 1 but he’s grabbed just six and five boards in the past two outings, respectively, parking his rebound Over/Under at 7.5 (Under -130).

A same-game parlay of Green Under 6.5 assists and Under 7.5 rebounds pays out around +170, which is tempting. But you can get a wider margin for error on either market with his Under 13.5 assists + rebounds as low as -111 odds. Draymond could still grab eight boards but dish out five assists and stay Under that number.

As mentioned, Green has been the primary antagonist for the Warriors, recording a total of 14 fouls in three games, including some techs. He’s always dancing on the edge with the refs and with Dallas desperately fighting for its life, emotions will run high in Game 4. We've been burned betting Overs on Draymond props before, with the fiery point forward getting the hook from the officials.