The Raptors are turning over a new leaf this season with franchise demigod Kyle Lowry now in Miami. But they have plenty of reasons to be optimistic for the future — find out how much that will translate right away with our Toronto Raptors betting preview.

Two seasons removed from their NBA championship run, it’s the beginning of a new era for the Toronto Raptors. Raptors legend Kyle Lowry has taken his talents to South Beach, so now it’s up to the likes of Pascal Siakam and Fred VanVleet to lead a young core that is looking to bounce back from its first losing season since 2013.

While this Raptors team is young, there is still plenty of talent, which includes No. 4 overall pick, Scottie Barnes. But maybe most importantly, the Raptors return to the Scotiabank Arena in Toronto to play in front of one of the best crowds in the NBA after being displaced to Tampa Bay last season.

Here is our NBA betting preview for the 2021-2022 Toronto Raptors season:

Odds to win the NBA Championship

It's always been tough for the Raptors to earn the respect of their peers, not to mention, well, sportsbooks. That was the case even when they were one of the best teams in the NBA. So, with all the turnover, it’s no surprise to see the Raptors at +7,000 to win the NBA Championship.

That has them about in the middle of the pack when it comes to championship futures. The betting favorites are the Nets (+230), the Lakers (+333), and the defending champion Bucks (+800).

The Raptors are probably more talented than they are being given credit for, but they likely would need the acquisition of another Kawhi Leonard-like superstar before I could recommend putting a flyer on this long-shot future.

Odds to win the conference/division

The Raptors have the eighth-best odds to win the Eastern Conference this season, which is interesting considering they didn’t qualify for the playoffs last year. That's better odds than the Knicks (+3,100), the Pacers (+3,200), Charlotte (+4,700), and the Wizards (+5,500). All four of those teams at the very least qualified for the play-in tournament.

The Nets (+105) and the Bucks (+325) are the big boys of the East in this 2021-2022 NBA campaign, but after that, it's anyone's guess. The Heat, 76ers, and Celtics make up the next tier of contenders, and while the Raps have a chance to return to the playoffs, they still lack the star power of the top teams.

This is a ridiculously disrespectful number to the Raptors. Toronto went 27-45 last season, which equates to about 31 wins over an 82-game season. That includes a seven-game losing streak to end the season where, if you looked at some of the Raptors’ lineups, you could tell the tank was on. Not to mention, they dealt with a bad bout of COVID and didn’t have a home court.

Despite all that, the advanced numbers say the Raptors weren’t that bad. They finished the year ranked 16th in offensive rating and 15th in defensive rating. The East is also top-heavy once again. A few teams could foreseeably regress while several more are still in a rebuilding phase. This year’s squad will not come close to resembling the one at the end of the season, and that’s a good thing. Bet the Over with confidence here. Did we mention that they get to play actual home games this year?

I almost went with the Over wins total here. But the value for the Raptors to make the playoff is even better. The East presents an interesting playoff opportunity for Toronto. It looks like the Nets, Bucks, Heat, and Celtics are likely the Top 4 teams this season. After that, virtually every team in the East has significant question marks (like the 76ers).

While Masai Ujiri has created a culture of winning in Toronto, his goal is to build another champion, and getting back to the playoffs is the first step. And even though Lowry is gone, Nick Nurse is still one of the best coaches in the NBA, OG Anunoby looks ready for a breakout season, and rookie Scottie Barnes could be the real deal. With Pascal Siakam and Fred VanVleet ready to lead the way, there is a lot of upside to this Raptors team.

The potential for this team is tantalizing. The Raptors already have the eighth-best odds to win the East, so to get them at +275 to make the playoffs seems like a pretty solid value.

The biggest move this offseason is obviously the departure of franchise legend Kyle Lowry. The point guard who is destined to have a statue outside of Scotiabank Arena in Toronto is now plying his craft with the Miami Heat. Even now that he is no longer in his prime, Lowry will be tough to replace. His basketball IQ is through the roof, he's a tough defender and can be a knockdown 3-point shooter.

The Raptors will try to mitigate the loss of Lowry with VanVleet, who is a terrific defender and can get as hot as anyone with the shooting hand. Helping VanVleet out will be one of the key returns from the sign-and-trade with Lowry, in veteran Goran Dragic. The 35-year-old point guard is still a skilled playmaker and can defend well enough. But he also fills some of that veteran leadership gap left by Lowry.

The other part of the return in the sign-and-trade for Lowry was Precious Achiuwa. The power forward has shown flashes of his athleticism in the preseason and he fills a need for the Raptors, who were lacking in the frontcourt last season. Achiuwa brings a ton of energy and moves the ball well in transition, which makes him a great fit for this Raptors team.

But the big get this offseason is No. 4 overall pick Scottie Barnes. The Raptors surprised those in NBA circles by selecting Barnes ahead of Gonzaga point guard Jalen Suggs. But the early returns have shown Ujiri might have known what he was doing.

The 6-foot-8 point-forward out of Florida State looks like a perfect fit with the Raps. A long athletic wing, and a versatile scorer, Barnes brings a lot to the table. On defense, he can guard anyone on the court. If he develops a reliable 3-point shot, watch out.

The strength of this Raptors team will be its defense. As noted, this team ranked 15th in defensive rating last season, with a roster that was a bit of a mess at times.

Now, Masai Ujiri has built this team with a clear plan in mind. With the likes of Siakam, Anunoby, Barnes, Achiuwa, Birch, and Chris Boucher, among others, the Raps are a roster of long, athletic players with heavy switchability and defensive versatility.

This long-athletic defense should create a lot of turnovers and, in turn, an exciting transition offense for the Raptors. Mix in some knockdown shooters like VanVleet and Gary Trent Jr., and it will be hard to slow this team down at times.

While the transition offense should make this team fun to watch, the half-court offense could be what really holds them back. The Raptors ranked 20st in true shooting percentage and 21st in effective field goal percentage in the NBA last season.

Simply put, the Raps are short on guys who can create shots for themselves, and they weren’t the best shooting team a season ago. So, if they get in a shooting slump and the ball doesn’t move well, the offense could stall. Toronto will need Siakam to bounce back from a disappointing season and hope a guy like Dragic will be able to help stabilize the half-court offense. Otherwise, there could be some issues scoring.

Another weakness for the Raptors was on the glass. Toronto ranked 28th in the NBA in rebounding percentage a season ago, but hope guys like Birch and Achiuwa can address those issues on the glass.

Rookie of the Year odds

Sixth Man of the Year odds

Defensive Player of the Year odds

Coach of the Year odds

Who’s ready to hear some gushing about OG? Anunoby has always flashed some great potential but now he looks primed for an insane breakout. He is coming off his best season to date, averaging 15.9 points, 5.5 rebounds, 2.2 assists and 1.5 steals per game while averaging 39.8 percent shooting from 3-point range on 6.1 attempts per game.

But it really looks like he worked on his off-the-dribble game this offseason. And if you have watched Anunoby this preseason, the work  seems to have paid off. In four games this preseason, Anunoby averaged 19.3 points in 25.1 minutes on some ridiculous .520/.542/.923 shooting splits.

With Lowry gone and Siakam still out for the first few weeks as he recovers from his offseason shoulder surgery, the stage is set for Anunoby to pop off. And it could be quite the blast.

Where can I bet on NBA odds?

You can bet on NBA odds at most online and casino sportsbooks. Find ratings and reviews for the best basketball sportsbooks for betting on NBA futures in your area. 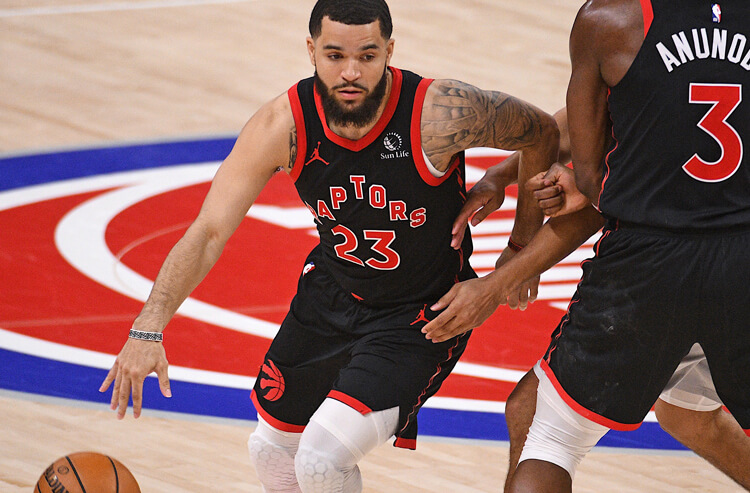