Phoenix, a -3.5 favorite for Game 4, has had its way with Denver and can close out this series with a sweep on Sunday. Can the Nuggets, who have lost all three games by double digits, stay alive at home? Find out with our best Suns vs. Nuggets picks.

“Suns in four” is the call from the stands, where Phoenix Suns fans have been taking a cue from their favorite team and pummelling the opposition. The Denver Nuggets are turtling and eating right hands, down 0-3 to the Suns entering Game 4 inside Ball Arena on Sunday.

Phoenix opened as low as -2 on the road and has jumped to a 3.5-point NBA betting favorite after blasting the Nuggets by a collective 56 points in the first three games of this NBA Playoffs Western Conference semifinals.

Here are our free NBA picks and predictions for Suns vs. Nuggets on June 13.

Overnight Friday into Saturday, PointsBet USA pegged Phoenix a 2-point favorite to open, moved to -3 late Saturday morning and to -3.5 early this morning. As of 5:30 p.m. ET, the Suns are back to -3. "Eighty-nine percent of bets and 84 percent of cash on the Suns," PointsBet's Wyatt Yearout said of spread betting. The total bounced from 221.5 to 221 to 222 and back to 221, with 68 percent of bets on the Over and 54 percent of money on the Under.

The Over is 38-13-2 in Nuggets’ last 53 games as home underdogs. Find more NBA betting trends for Suns vs. Nuggets.

The opening spread and subsequent line move aren’t shocking considering just how good Phoenix has played versus Denver. In fact, the Suns have lost just two quarters of basketball in the opening three games (tied in two).

The third quarter, specifically, continues to set the tone of the entire series — and the Nuggets’ struggles — with Phoenix outscoring Denver 96-67 after the half. For whatever reason, the Nuggets have been plagued by poor third-quarter efforts all season (-1.5 average third-quarter margin on the year) and the halftime intermission remains a hump coach Michael Malone just can’t navigate.

Denver is shooting a dismal 34.3 percent from the field in the third frame versus Phoenix, including a 10-for-28 mark from beyond the arc in the quarter. That’s helped Phoenix turn down the tempo in the second half of these conference semifinal games and grind out defensive stops in the halfcourt set. These teams own a first-half pace rating of 100.0 in this series, which bottoms out to 92.00 in the final 24 minutes.

The halfcourt game is just fine by Phoenix’s offense, which thrives in mid-range thanks to the play of Devin Booker and Chris Paul. The Suns had a huge backcourt edge coming into this series and even with the return of Nuggets’ stopper Will Barton, Phoenix’s backcourt has been at the wheel of those second-half demolitions.

Other than catching the points at home in an elimination situation, there hasn’t been much from this Nuggets team that could persuade bettors from taking the host underdog. Road favorites have lived up to the hype this postseason, bringing an 11-3 ATS record into Sunday’s slate.

Injuries and additions left Denver’s offense disjointed in the home stretch of the schedule, as Malone & Co. tried to figure out how to plug the hole left by Jamal Murray’s season-ending injury. The Nuggets have rarely had a game where all of their pieces are clicking, as was the case again in Game 3.

The recent returns of Barton and Monte Morris have given some much-needed bite to the backcourt, with those two providing 35 points off the pine in Friday’s loss. But beyond Nikola Jokic’s MVP stat line of 32 points, 20 rebounds and 10 assists, Denver’s four other starters combined for only 30 points on 11-for-33 shooting.

This will be Barton’s third game back after missing a good chunk of time and his minutes jumped to 28 in Game 3 after playing just under 16 limited minutes in Game 2. While he’s known more as a stopper, the Nuggets will take any offensive consistency it can get at this point and it wouldn’t be a shock if Barton started Game 4. Having him on the wing and drawing the attention of Phoenix’s defense will free up space for guys like Michael Porter Jr. and Aaron Gordon to operate around the paint.

As for the Suns, the entire starting lineup is capable of finding the basket and has had remarkable chemistry in this series. Phoenix boasts an offensive metric of 124.1 — the second-highest mark in Round 2 of the NBA Playoffs — and the awakening of Booker in Game 3, after two quiet contests to open the series, will carry over to Sunday. Expect the Suns’ shooting guard to go for the throat with the Nuggets on the ropes.

Slow starts have plagued the Nuggets in this series, whether that’s coming out of the halftime break or from the opening tipoff.

Denver is averaging only 25.3 points in the opening 12 minutes of this Western semifinal set — a big dip from the team’s season average of 30.9 points per first quarter, which ranks second in the NBA.

The Nuggets are a wounded animal backed into a corner on Sunday and, while I don’t see them avoiding the sweep, they will give the Mile High faithful plenty to cheer about in the first frame of Game 4. I like the +116 1Q moneyline price on a desperate home side. 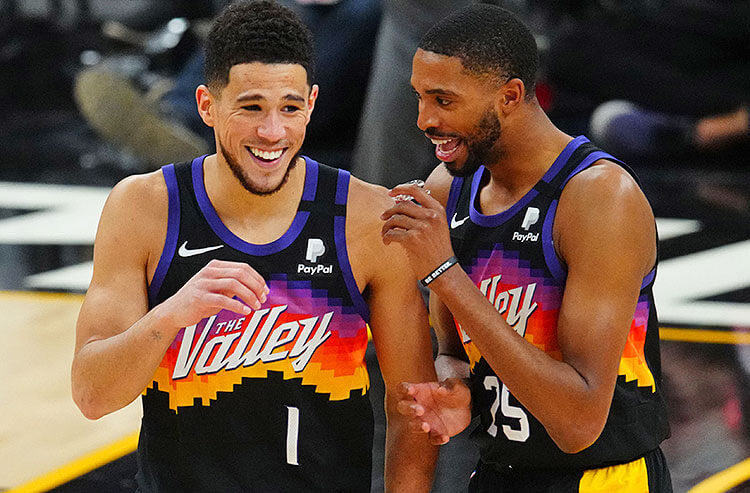 Suns vs Nuggets Game 4 Picks and Predictions: Suns in Four
Provided by