The Under has cashed in each of the first three contests of this series. While we expect Milwaukee's offense to bust out, will it be enough for Game 4 to go Over the 228.5 total? Find out with our Nets vs. Bucks betting picks and predictions.

The Milwaukee Bucks enter Sunday's Game 4 at home against the Brooklyn Nets as slight underdogs after holding on for a three-point win in Game 3.

The Nets won the first two games in this series with relative ease, but the Bucks were able to scrape away with a tight victory to cut Brooklyn's lead to 2-1.

Will Milwaukee even things up with another win in front of its fans? Find out in free NBA betting picks and predictions for Nets vs. Bucks on June 13.

Brooklyn landed on TwinSpires' odds board as a 2-point favorite, fell back to -1, then returned to -2, where the Game 4 line stands at 1:45 p.m. ET. It's all Nets on the spread, at 82 percent of tickets and 85 percent of money. "The Bucks are our biggest need of the day again," TwinSpires trading analyst Zachary Lucas said. The total is down a tick from 229 to 228.5, with 57 percent of tickets/64 percent of money on the Over.

The Bucks are 6-2 ATS in their last eight home games versus teams with winning road records. Find more NBA betting trends for Nets vs. Bucks.

The Bucks stormed out to a huge lead against the Nets in Game 3, but they quickly let that getaway and it almost led to a 3-0 deficit.

Giannis Antetokounmpo was a big part of the problem in letting Brooklyn back into it, as the superstar was missing free throws and settling for outside jumpers, which is a massive win for the Nets defense. Antetokounmpo had dominated early on by simply driving to the basket and being aggressive. The Bucks were ultimately able to squeeze out an 86-83 to make this a 2-1 series, but Milwaukee will once again have to focus on sticking to the game plan. If Mike Budenholzer’s team can do that, the Bucks should be able to even this thing up.

The Nets are switching almost everything against the Bucks in this series, and that has made Milwaukee panic. Milwaukee was a lot more prepared for that in Game 3, but the team got tentative again after the first quarter. The Bucks need to just continue to trust an offense that was fifth in the league in offensive rating during the regular season. That means Antetokounmpo needs to continue to attack the basket, even when Brooklyn tries to dare him to shoot.

Normally, any coach would want a guy like Antetokounmpo to let it fly from deep, as that should create some sort of floor spacing. But with how bad the Greek Freak has been from deep, it just doesn’t benefit Milwaukee at all.

Meanwhile, the Bucks need Jrue Holiday and Khris Middleton to simply be better in one-on-one situations. Brooklyn is letting those guys get the ball in isolation situations, and both of them are good enough to take advantage. While Milwaukee won last game, the team is still due for its first excellent offensive outing. Don’t be surprised if that comes here.

The pressure is back on the Nets a bit, as they're at risk of letting their two-game lead slip away, and the return of James Harden is a complete question mark.

It’s extremely unlikely that the Nets and Bucks will each shoot under 40 percent from the floor in this game, which is exactly what happened in Game 3. Both teams, however, can be a lot better than they were in that one and it’s entirely possible that this game will still fall well short of the total.

Each of the first three games in this series has gone Under the total, and the teams haven’t even come close to reaching the 230-point mark yet. Perhaps that will happen when Harden eventually does return, as the game could open up quite a bit with his ability to make plays for himself and his team.

But as of right now, it’s just unlikely that these teams will hit the Over, especially when it’s set this high.

It’s only a matter of time before Holiday comes through with a big offensive outburst for Milwaukee. The 31-year-old hit what was ultimately the game-winning layup for the Bucks in Game 3, so that should take some of the pressure off of him moving forward. Once he finally gets a little comfortable in this series, he should begin to hit some shots and find some consistency.

The Nets are a lot better defensively than they are given credit for, but Holiday is more than capable of scoring on Kyrie Irving when isolated. Realistically, this should be the game that he gets it going.

It’s a massive Game 4, the Bucks fans should give him some extra juice, and we like him to rise to the challengee. 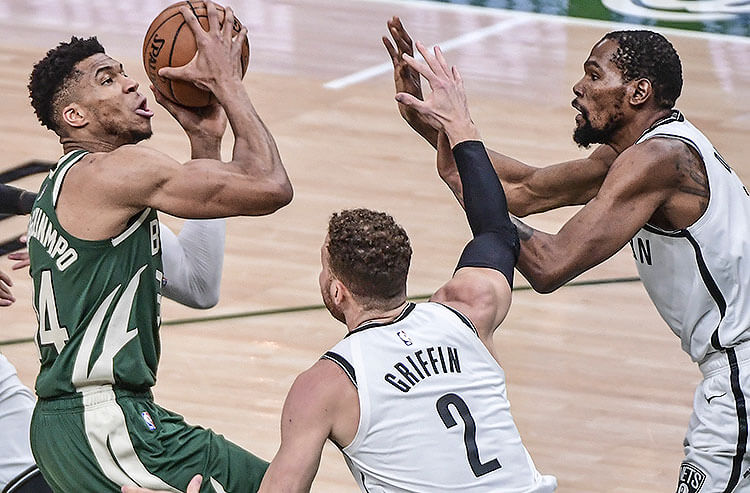 Nets vs Bucks Game 4 Picks and Predictions: Don't Duck the Bucks
Provided by