Spurs vs Knicks Picks and Predictions: NY at MSG a Good Play vs Struggling Spurs

Julius Randle has had a full breakout season this year for New York, setting career highs in points, rebounds, assists and 3-point shooting.

The New York Knicks are happy to be home following a difficult West Coast road trip, but still face a Western Conference foe when they host the Spurs at MSG tonight.

The Knicks have officially punched their ticket to the postseason but still have some work to do to ensure the best seed possible, and are 4.5-point NBA betting favorites over the Spurs, who are hanging on to the final spot in the play-in tournament.

Here are our best free NBA picks and predictions for Spurs vs. Knicks on Thursday, May 13, with tip-off set for 7:30 p.m. ET.

(Editor's Note: These picks were made prior to Thursday evening's news that Derrick Rose would miss Spurs vs. Knicks.)

The Knicks are 22-5 ATS in their last 27 games against teams with a losing SU record. Find more NBA betting trends for Spurs vs. Knicks.

The Knicks return to the Big Apple after a grueling six-game Western Conference road trip that finished with the Nuggets, Suns, Clippers and Lakers. New York finished a respectable 3-3 on the trip but has a bitter taste in its mouth following a 101-99 OT loss to the LeBron-less Lakers on Tuesday, in which the Knicks blew a 10-point fourth-quarter lead—and missed game-winning shots at the end of regulation and overtime.

The result is the 'Bockers are currently 38-31, tied for fifth in the Eastern Conference standings and a half-game out of fourth, but they need at least one win in their final three home games to guarantee a Top-6 finish and avoid the play-in tournament, which starts with a matchup against the Spurs tonight.

San Antonio is very likely to see postseason action — it's two games clear of Sacramento for 10th in the West (and the final play-in spot) but is three games back of Memphis for ninth, so the Spurs are basically locked into place.

Unlike the Gregg Popovich teams of yesterday, defense is not a strong point for the Spurs. San Antonio is a middle-of-the-pack defense team but struggles to contain opposing guards, giving up a league-worst 85.3 points per game. That's a bad recipe when going against resurgent Knick Derrick Rose, who's averaging 22 points per game in May and has topped 24 points in four of his last six, plus power forward Julius Randle, who has been unstoppable this season — regardless of opponent — as he makes a case for an All-NBA nod.

Rose, along with three-and-D wing Reggie Bullock, are both on the injury report as questionable for tonight, but neither player showed any ill effects during the loss to the Lakers and we'd be surprised if they didn't suit up in what is the easiest game remaining for New York—and a must-win.

The Spurs have lost seven of their last 9 games overall, and in losing at Brooklyn last night have also lost six of their last seven road games. Notching a road win on the second half of a back-to-back against the Knicks will be a difficult task, especially considering the Knicks take care of business at home, covering the spread in 17 of their last 21 games as home chalk.

These are two of the lowest-scoring teams in the NBA all season, and that hasn't changed in May, where the Spurs are 19th in ppg and New York is 23rd.

San Antonio did put up 116 points against Brooklyn last night and exploded for 146 against Milwaukee on Monday, but those are their two highest outputs of the month (which includes three games of 102 points or less), while the Bucks defense has fallen off a cliff in May and Brooklyn has never been known for its tenacity in stopping opponents.

New York, on the other hand, has been one of the most ferocious defensive squads all season long, sitting 6th in points against in May (first overall for the season), giving up the lowest opponent field-goal percentage (this month and this year) and holding foes to a 35.6 percent mark from beyond the arc in May and 34 percent for the season.

The Knicks have been one of the best Under bets all season long and have gone Under the total in four of their last five games as a home favorite. San Antonio will also likely have some tired legs in the latter stages of the game, something that has been prevalent in the past as the Spurs have gone Under the total in each of their last four games on the tail end of a back-to-back.

We mentioned earlier how Randle has been the engine of the Knicks offense this season, but he's not just scoring points—he's also consistently grabbing rebounds and racking up assists.

Randle dropped at least five assists in five of six games during this recent road trip, but those numbers could have been even higher. New York shoots 45.6 percent from the floor and 39 percent from three this season—but was below those numbers over each of the last four games, which all came against some of the league's stingier defenses.

With Rose questionable for tonight, his possible absence (or at least some lesser minutes) means more chances for Randle to have the ball and facilitate the offense as a point-forward. The Spurs have also allowed opponents to shoot better than 50 percent from the field in May, so if the Knicks can get a few more shots to fall, chances are Randle adds a few more assists to his total tonight. 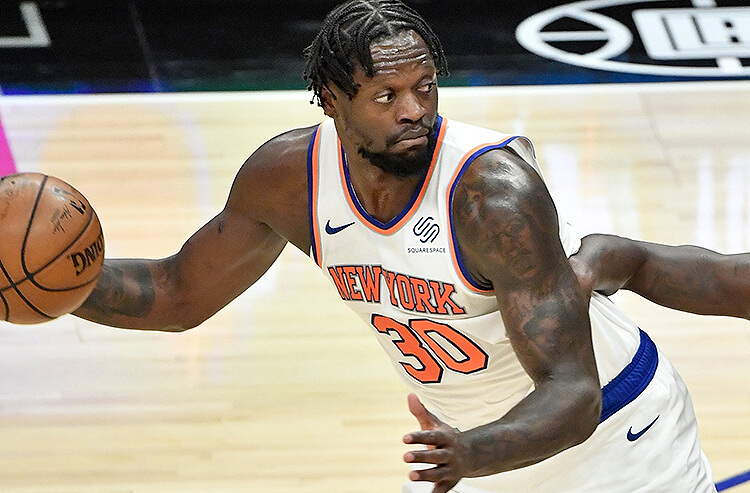 Spurs vs Knicks Picks and Predictions: NY at MSG a Good Play vs Struggling Spurs
Provided by