Raptors vs Kings Picks and Predictions: Red Velvet Makes It Rain From Deep

Sacramento has been on a scoring surge over the last couple of weeks and will look to do damage against a Toronto defense that has regressed this season. Read more in our Raptors vs. Kings betting picks.

If it wasn’t for matchups against the New York Knicks, the Toronto Raptors’ turbulent season could be in an even more dire situation. As such, the Raptors have just two wins in their last six games as they embark on a massive seven-game Western Conference road trip which begins tonight in Sacramento against the Kings.

Can Toronto contain a high-octane Kings’ offense that is one of the best in the NBA and led the team to victories in seven of its last eight games? I dig through the numbers and bring you my best bet in our free NBA picks and predictions for Raptors vs. Kings on January 25.

Raptors vs Kings picks and predictions

The Raptors have lost four of their last six games, with the last two wins both coming against the Knicks. They are also just 8-15 since December 9.

Part of the reason for that is because a Raptors defense that is supposed to carry this team hasn’t played up to its potential. Over this 8-15 stretch, the team ranks 24th in defensive rating. They have struggled on the glass, sitting at 27th in rebounding rate.

But the place they have really struggled is on the perimeter. The Raptors’ swarming defense has felt a little over-aggressive of late, allowing for a lot of open looks for opposing teams. As a result, the Raptors rank 29th in opponent 3-point shooting percentage over this stretch.

And what better way to take advantage of that than by backing Kings’ guard Kevin Huerter to go Over his made 3-pointers prop?

While Huerter is hitting just 34.6% of his 3-balls over the last five games, this matchup against the Raptors might just be exactly what he needs to get going again. Huerter is getting the job done at a 41.4% rate from deep for the season, and prior to the last five games, he had a 12-game stretch where he hit three or more 3-pointers in nine starts.

It’s worth backing Huerter to get back on track and go Over 2.5 made threes at plus money.

Got an idea for a Raptors vs Kings bet that you really like?

Try PointsBet's "Request Your Bet" feature — You name it, they'll price it.

A lot of NBA teams are waiting to see what the Raptors do heading into this season’s trade deadline. This seven-game Western Conference road trip could go a long way in deciding what road Masai Ujiri and the Toronto front office ultimately decide to take.

Tonight, the team’s focus has to be on slowing down what has been an outstanding Kings offense. That offense is part of the reason why the Raptors are 3-point underdogs in this matchup.

Led by De’Aaron Fox and Domantas Sabonis, the Kings' offense has been great all season long, but they are really cooking now. Over the last nine games (where the Kings are 7-2 straight up and 6-2-1 against the spread), they have averaged a crazy 130 points per game. That stretch has the Kings ranked first in the NBA in offensive rating for the season.

We’ve already talked about how the Raptors' defense isn’t slowing anyone down lately. They certainly didn’t slow down Sacramento when these teams last met in Toronto back on December 14. The Kings shot 50% from the floor and hit 17 shots from beyond the arc in a 124-123 win over the Raps.

And while the Kings' defense isn’t much to write home about, the Raptors' offense can be tough to watch as Toronto ranks dead last in the NBA in effective field goal percentage.

Mix in the fact the Raptors have won just six road games all season and are 5-11 ATS in their last 16 road games overall, and I would lean toward laying the chalk with the home team here.

When it comes to the total, the number hit the board at 239, and that’s where it sits as of Wednesday afternoon. My initial reaction is that’s way too high for a Raptors game, but that also goes to show how bad Toronto's defense has been lately.

While the Kings are scoring at will over their last nine contests, the Raptors are surrendering 119 points per game over their last six games on the road. Not shockingly, the Over is 6-0 in those six games.

Meanwhile, the Kings rank 24th in defensive rating, 28th in opponent field goal percentage, and 24th in scoring defense, allowing 116.7 points per game. With Pascal Siakam doing his thing and Fred VanVleet starting to find his rhythm, even a sub-par Raptors’ offense should be able to put up some points here.

Sacramento is 5-0 ATS in its last five games vs. a team with a losing record. Find more NBA betting trends for Raptors vs. Kings. 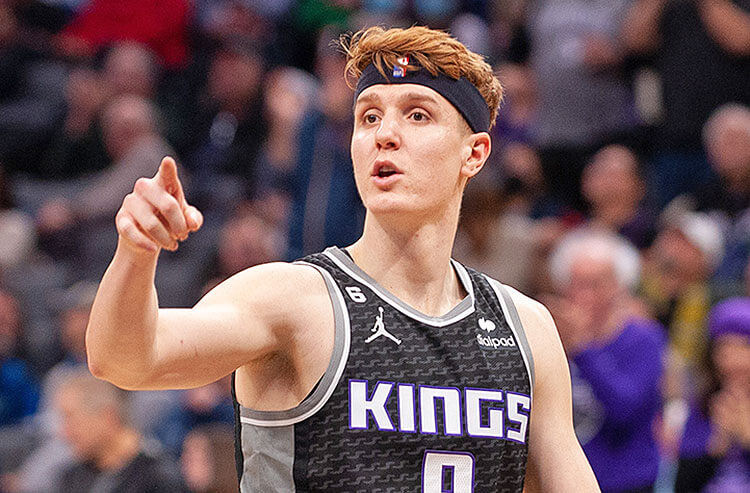 Raptors vs Kings Picks and Predictions: Red Velvet Makes It Rain From Deep
Provided by