As the U.S. recovers from its Thanksgiving football fiesta, we're here to serve up our best NBA player prop picks for Friday's basketball bettors. Get the premier props from around the Association, including Trae Young going Grizzly hunting.

Leftovers. If you celebrated Thanksgiving yesterday, it's probably what you're having for dinner, and also, how you might look upon today's NBA betting schedule after yesterday's jolt of NFL spectacle.

But while you were watching football and napping off the tryptophan, we went to work mining the markets for the best prop bet values.

With 12 games on the slate tonight, there's no shortage of selection, so let's get into it with our free NBA player prop picks for Friday, November 26.

The early game on Friday's NBA slate pits the Pistons against the Clippers in L.A., where Detroit will continue waging a losing war against competent NBA offense.

Detroit ranks last in the NBA in scoring, thanks largely in part to its also-NBA-worst 40.7 shooting percentage. All those clankers have to be cleaned up by someone, and it sure as hell isn't going to be the Pistons, who also rank dead-last in the league in rebounding rate.

All this suggests a lot of boards to be gobbled up by the Clippers, and brute-force PG Eric Bledsoe seems like the best target for rebounding props.

Bledsoe's total sits at O/U 3.5, a number he's topped in seven straight games and 10 of his past 11. We're (somehow) still getting plus money on the Over against the league's worst shooting and rebounding team, so fire away with confidence.

The Young and the restless

Two of the game's most explosive point guards will meet Friday night when Trae Young and the Hawks visit Ja Morant and the Grizzlies at FedEx Forum.

Young has been balling of late, dropping 30+ in each of his past two games and averaging 26.7 ppg in November. But, while we have faith that he's found his stroke after an uneven start to the season, this pick is a lot more about fading a Grizzlies Swiss-cheese defense that would have the #GNG era rolling over in its grave.

Memphis ranks dead last in the NBA in defensive rating by a fairly significant margin, while also allowing the most points to opponents (115.5 per game). The Grizz have coughed up a deplorable 127.3 ppg over their past three, and while their recent futility might spur a re-grouping on that end, don't expect the Grizzlies' issues (everything from Morant dying on screens at the point of attack to wing defenders over-helping and bleeding 3-pointers at a league-high 40.4%) to correct themselves overnight.

This brings us to Young, the star around which Atlanta's offense orbits, and one of the few players whose usage rate isn't regularly cannibalized by the Hawks' deep rotation.

Young will get his touches, and the Grizzlies will invariably do little to prevent him from putting up numbers. Bank on him to go Over his points total.

Mikal Bridges got the bag this summer from Phoenix, in an offseason where they notably snubbed Deandre Ayton on an extension.

So far this season, he's provided remarkably efficient two-way play as something very close to the archetype for a 3-and-D swingman.

Bridges averages 13.1 ppg on the season, safely clear of his 10.5 O/U for points tonight against the Knicks, whom the numbers would suggest are a great matchup to target.

After the Knicks ran well on defense and played like molasses in 2020-21, they profile close to the league median in both defensive rating (17th) and pace (16th). So, don't necessarily expect the same grind-it-out affair most Knicks games became last season.

Furthermore, New York is one of the worst teams at defending small forwards, coughing up the fourth-most points per game to the three-spot, per Hashtag Basketball. On a related note, the Knicks allow opponents to launch 3-pointers – where most of Bridges' looks come from – at the NBA's fourth-highest rate.

Perhaps it's not a huge surprise then that Bridges scored 16 and 22 points in two games against last year's stat-snuffing Knicks squad. Small sample, obviously, but it sets a precedent of what the stats already suggest he can do. Grab the Over, but shop around, as it's juiced heavily at most books. 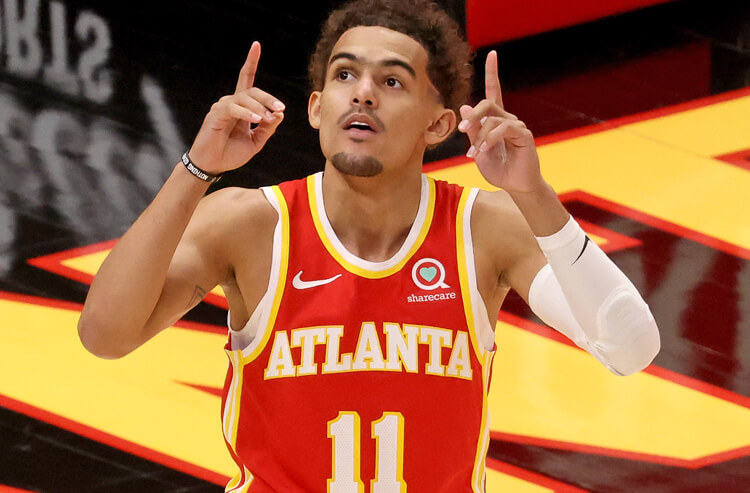