Orlando stomped Chicago recently, but both the books and our Bulls vs. Magic picks think tonight's game will play out much differently. Find out why the favorites will get revenge with Zach LaVine back in the lineup.

The Orlando Magic head to the United Center on Tuesday night to face off against the Chicago Bulls. The Magic might be the worst team in the NBA but managed to rout the Bulls just nine days ago.

Oddsmakers expect Chicago to get some revenge for that defeat with NBA betting lines opening the Bulls as 8.5-point home favorites tonight.

Can Orlando continue its recent run of upset victories? We let you know with are our best free Magic vs. Bulls NBA picks and predictions for Tuesday, February 1, with tipoff at 8 p.m. ET.

The line for this game opened with the Bulls at -8.5 with the Over/Under at 222. As of noon ET, both the line and total have stayed steady. These teams played against each other less than two weeks ago, with the Magic pulling off a 114-95 upset win as 3.5-point underdogs.

The Bulls are 8-3 ATS in their last 11 home games. Find more NBA betting trends for Magic vs. Bulls.

Magic vs Bulls picks and predictions

Don't look now, but the last-place Magic are 3-1 SU and ATS in their last four games, a stretch which includes a 19-point victory against the Bulls on January 23 and a 110-108 win against the red-hot Mavericks on Sunday.

The Bulls were atrocious on offense in that previous matchup against Orlando, turning the ball over 21 times and mustering just 95 points despite taking 32 free-throw attempts. DeMar DeRozan and Coby White combined for 63 points on 23-39 shooting while the rest of the team totaled 32 points on 27 FG%.

However, Chicago has played much better offensively since Zach LaVine returned to the lineup the next day against Oklahoma City. The Bulls have gone 3-1 SU and 2-1-1 ATS since then and are fresh off a 130-116 win versus the Blazers on Sunday. They've scored 118.5 points per game with a 52.1 FG% over that span with Lavine averaging 24 ppg and 5.8 apg.

The Bulls still have the best record in the Eastern Conference at 31-18 (28-20 ATS) and although they've missed Lonzo Ball and Alex Caruso defensively, Orlando isn't equipped to take advantage of that. Orlando's young starting backcourt of Cole Anthony and Jalen Suggs has a combined field goal percentage of just 38.2% and the Magic are 28th in the league in offensive rating.

The Magic haven't been much better on the other end of the floor, ranking 23rd in defensive rating, and they likely won't be able to lock down the Bulls for the second time in ten days.

On paper, the Magic are still the worst team in the NBA and it's only due to their recent strong play that they aren't double-digit dogs in this contest. Expect the magic to wear off after back-to-back wins and back the Bulls to win big tonight.

The Bulls are a much better offensive team with LaVine back on the floor, which isn't a surprise given that he averages 24.9 ppg and 4.3 apg. The athletic combo-guard combines with the efficient DeRozan (26.4 ppg on 50.2 FG%) and highly-skilled center Nikola Vucevic (16.8 ppg, 11.4 rpg) to form a dangerous trio that can fill up the hoop from every spot on the floor.

That said, the Bulls have clearly regressed defensively with Ball and Caruso on the IR. With their two best perimeter defenders logging just 229 minutes since Christmas, the Bulls are allowing 113.4 ppg in 20 games since then after limiting foes to 106.3 ppg prior to that date.

With the Over 7-3-1 in Chicago's last 11 games and Orlando going 4-1-1 O/U in its previous six contests, we're leaning towards the Over again.

Orlando center Wendell Carter Jr. pulled down just seven boards against Chicago in that previous meeting, but the big man averages 10.1 rebounds per game and is usually a model of consistency on the glass.

Vucevic is an imposing presence on the glass, but despite the 260-pound big man, the Bulls are just 21st in the league in rebounding rate. Take the Over 9.5 on Carter's rebounds total tonight.

Did you know that if you parlayed today’s NBA Magic vs. Bulls predictions and picks in a single-game parlay, you could win $60.83 on a $10 bet? 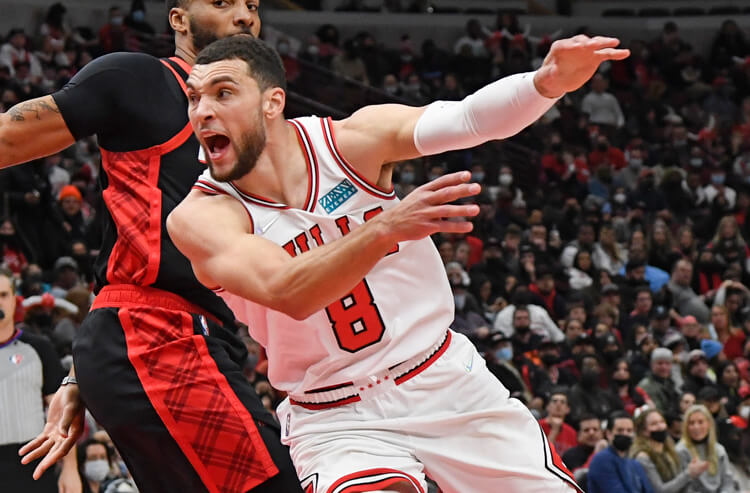 Magic vs Bulls Picks and Predictions: Orlando's Tricks Tough to Repeat
Provided by