Mavericks vs Warriors Game 2 Picks and Predictions: How Will Dallas Respond in Game 2?

After a 25-point crushing of the Mavs in Game 1, the Warriors look to take control of the series with another win in Game 2. Dallas will inevitably push back, but will it be enough to stay within the 5-point number? Read our NBA betting picks to find out. 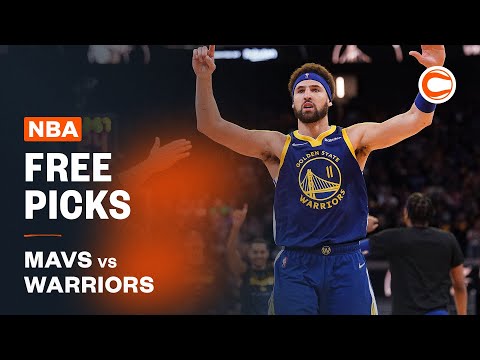 The Golden State Warriors sent a reminder across the nose of the remaining NBA playoff teams in Game 1 of the Western Conference finals: Don’t forget, we’re the favorites.

Golden State crushed the Dallas Mavericks 112-87 on Wednesday, cooling off the hottest team in the postseason and the hottest player, checking Mavericks star Luka Doncic to only 20 points on 6 of 18 shooting.

That effort has tacked an extra point on to the Game 2 spread, with the Dubs giving 6.5 points Friday night. Here are our free NBA picks and predictions for Mavericks at Warriors on May 20.

Following the Game 1 blowout, oddsmakers installed Golden State as a 6-point home favorite which quickly jumped to -6.5 as of Thursday morning. The total opened at 214 points – a half-point lower than the opening total for Game 1 which was bet up as high as 216.5 before the teams combined for only 199 points in the series opener.

The Under is 48-23 in Mavericks' last 71 games as underdogs. Find more NBA betting trends for Mavericks vs. Warriors.

The Mavericks’ momentum from their stunning series win over the top-seeded Phoenix Suns couldn’t make its way to the “City by the Bay” for Game 1 of the Western Conference Finals.

Instead, the once-scorching shooting clip of this Dallas team dropped to sub-zero temperatures, with the Mavs making just 36% of their looks from the field including a chilly 11-for-48 from beyond the arc Wednesday night.

Golden State flexed its defensive muscles, getting great one-on-one play from Andrew Wiggins who was assigned to slowing down Doncic. His quickness and length checked Doncic to a playoff-low 20 points, and the rest of the Mavs players didn’t fare much better.

The Warriors made Dallas work on both ends. Not only did the Dubs’ defense wear out the Mavericks but their cut-heavy offense kept Dallas’ wheels spinning trying to keep track of all of Golden State’s scoring options.

The Warriors are one of the best off-the-ball offenses with continuous motion through cuts and screens, and that produced a 56% success rate from the floor with 24 assists on 46 makes. Golden State finished with seven players in double figures and overwhelmed Dallas with its depth, pulling 37 points off the bench in the win.

I do expect Doncic to bounce back with a better effort in Game 2 and the Mavericks’ role players have performed at a higher standard in the postseason, so I’ll give them the benefit of the doubt, but is that enough to close what looks to be a massive gap between these two teams – even with the spread puffed up to Mavericks +6.5?

The biggest strength Dallas had coming into this series was momentum (the reason I bet it at +5 in Game 1) after two incredible games to send the Suns packing. That momentum is now long gone. Doncic also presented a rarity for the Warriors, who usually have the best player (or players) on the floor each game, but Golden State’s collective wealth of talent is greater than that one superstar, no matter how well Luka is playing.

Depth is Dallas’ disadvantage in this series, especially with the way the Warriors make you run on both ends. The Mavs will battle for every shot and then must come down and chase the Dubs around on every Golden State possession, lacking that true big body to protect the rim.

Golden State scored 44 points in the paint, grabbed seven offensive rebounds which led to 14 second-chance points, and connected on 68% of its 2-point field goal attempts – more than half of which were created by assists.

That puts Jason Kidd in a tough spot in terms of his rotation: stick to the small-ball that got the Mavs here and hope shots drop or throw a big body in the paint and pray it doesn't hurt Dallas' offensive flow on the other end. Either way, we're siding with the Warriors in Game 2.

I went Under the total in Game 1, feeling that number (which closed 216.5) played into the narrative of two 3-point trigger-happy teams and not basing itself on the fact that these are two of the top defensive clubs in the league.

The Warriors took what Dallas was giving them, which was pretty much a wide-open path inside. Golden State shot just 29 triples (making 10) and instead used its motion-heavy playbook to set up easy interior scores. That efficiency forced an already methodical Mavericks’ offense to slow down even further, as Dallas started many possessions off the inbounds under its own rim.

When they did have the basketball, Wiggins kept close tabs on Doncic and Steve Kerr threw a fruit salad of defensive looks at him, mixing in man-to-man with heavy help, zone sets, and even some box-and-one (mix of zone with four players and one man-to-man shadow on Doncic).

Game 1 produced an overall pace rating of 96.5 but the first half saw a rating of just 91 with a total of 99 just points scored which is more indicative of the true tempo of the game, compared to the run-away rating of 102 in the second half with the Mavs playing from behind and bench players logging more minutes in a blowout.

The Game 2 total is barely an adjustment, opening at 214 points – just half a point lower than the original number for Game 1. Even with Dallas’ offense likely producing more points, there's plenty of headroom for the Under on Friday night.

Surprise blowouts have plagued NBA prop bettors leaning to the Overs this postseason.

The first half numbers have those projections on track but when the game gets out of hand, starters are yanked to conserve energy and those would-be winners are left to die on the vine. Case in point: Stephen Curry Over 5.5 assists in Game 1.

Curry kicked off the series opener with fantastic playmaking, quickly picking up four assists in just under 19 minutes of the first half. But with Golden State pulling away, Curry was limited to only 12 passive minutes of action in the final two quarters and failed to record another assist. Barf.

Like in past matchups with the Mavericks, Dallas put some added pressure on Curry and tossed double teams at him. That turns Curry into a distributor and with the Dubs’ constant motion and no bigs patrolling the paint for Dallas, the Warriors point guard had posted assist totals of seven, nine and 10 in the three matchups with the Mavs prior to Wednesday’s Game 1.

Our projections were right. Our handicap was right. The result was wrong. We’re going back to the well, expecting a closer contest and the usual workload for Curry in Game 2. And we’ll gladly take the discount on Over 5.5 assists, which is sitting as low as -110.

Did you know that if you parlayed today’s NBA Mavericks vs. Warriors predictions and picks in a single-game parlay, you could win $52.86 on a $10 bet?

Mavericks vs Warriors Game 2 Picks and Predictions: How Will Dallas Respond in Game 2?
Provided by