Anthony Davis is back for L.A. after a prolonged absence that saw their defense fall flat. Can he prop it back up against a short-handed Brooklyn squad? Find out with our Lakers vs. Nets NBA betting picks.

The Los Angeles Lakers visit the Brooklyn Nets – the current NBA betting favorites to win the title – at the Barclays Center tonight.

This massive non-conference clash has the potential to be a turnaround moment for the Lakers, who are barely hanging on to the No. 8 seed in the Western Conference but return forward Anthony Davis to the lineup for the first time in more than a month.

Davis’ status and the Nets missing Kevin Durant and Kyrie Irving Tuesday has L.A. installed as a 2.5-point road favorite

Check out our free NBA picks and predictions for Lakers at Nets on January 25.

With Davis expected to play for the first time since December 17, Los Angeles opened as a 3.5-point road favorite but has since slimmed to -2.5. The total hit the board at 226 points and has climbed to 227.5.

The Under is 23-11-1 in Lakers’ last 35 games as road favorites. Find more NBA betting trends for Lakers vs. Nets.

Lakers vs Nets picks and predictions

Basketball bettors can’t trust the Lakers as far as they can throw them, even with AD back in action. But with a disgruntled James Harden and the ghost of the Brooklyn Nets taking the court in New York tonight, it’s not too tough to see a 3-point L.A. win. A victory over the Nets – even with Kyrie Irving and Kevin Durant out – would go a long way for the Lakers right now.

Brooklyn is back home after splitting a four-game road trip, most recently coming off a loss at Minnesota. A game inside the Barclays Center means no Irving due to vaccination policies, and the Nets’ offensive output drops by more than seven points at home compared to on the road since Irving returned to action.

No Kyrie also stings Brooklyn on the defensive end, as he often draws opponents’ top backcourt talents. The Nets allow 2.1 more points as hosts versus in the role of visitors since Irving was cleared to play in road games only.

That missing lockdown defender and Davis’ presence creating space for wing players should open things up for Los Angeles in the halfcourt set – an area in which L.A. has struggled to score consistently. The Lakers will push tempo with their transition offense as well, especially against a Nets team allowing 20.5 points per game against transition attacks (fifth-most) this season.

Without Irving to worry about, the L.A. defense can focus on slowing down James Harden. Harden’s offensive efforts have gone up and down in the past month and the Lakers will rotate fresh defenders at him.

To that, Los Angeles can also play a much tighter brand of defense on Harden and the Nets perimeter talents knowing that Davis is behind them protecting the paint.

The Lakers watched foes go from 33.5% shooting from 3-point range (fifth-lowest) to 36.6% from distance (27th) with Davis out of the lineup since December 17. Los Angeles also allowed 51.2 average points in the paint with AD out of commission versus 48.4 PITP with him in.

Brooklyn has taken advantage of some weak defenses in recent games, facing four teams ranked 18th or worst in points allowed per game. The Nets stubbed their toe against some tougher defenders, most recently losing 114-107 to a Cleveland club sitting No. 2 in points allowed.

The 2021-22 Lakers are far from the defensive stalwarts that they’ve been during the LeBron James era, but before Davis went down, L.A. sat 10th in advanced defensive rating. Since then, Los Angeles is 24th in that metric and allowing 115.3 points per game. Those defensive numbers will improve, starting in Brooklyn tonight.

Russell Westbrook has taken the brunt of the criticism during the Lakers’ lull, and if there’s one thing we do know about Russ, it’s that he’s a spiteful man.

A shorthanded Nets roster on this big stage against turnstile defender and former OKC teammate James Harden seems like as good a place as any for Westbrook to silence those critics. He’s coming off a 24-point effort in the loss at Miami on Sunday while also adding nine assists and nine rebounds to his stat line.

Westbrook is priced at +500 to record a triple-double – something he hasn’t done yet in 2022 – but instead of taking a big swing on that prop, we’ll go Over 33.5 points + assists + rebounds for Tuesday’s tilt. He did record a triple-double (13 points, 12 rebounds and 11 assists) in his last matchup with the Nets in L.A. on Christmas Day.

Did you know that if you parlayed today’s NBA Lakers vs. Nets predictions and picks in a single-game parlay, you could win $59.58 on a $10 bet? 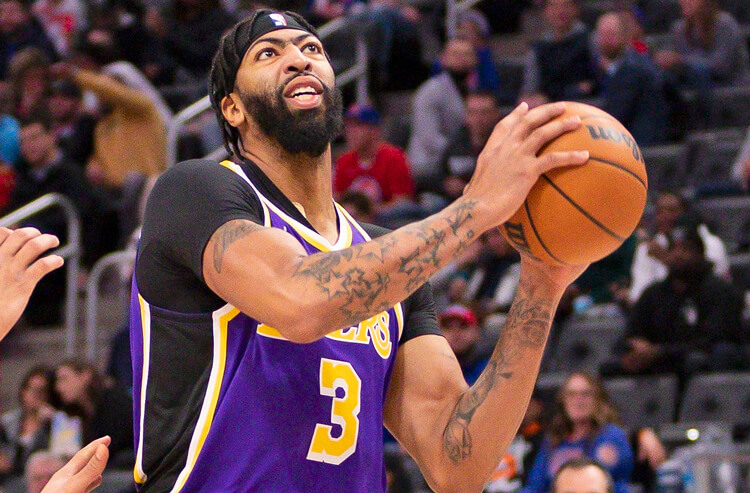 Lakers vs Nets Picks and Predictions: Lakers Rally Around Davis' Return
Provided by