The Toronto Raptors have been up and down for much of the 2021-22 season and welcome the visiting Hornets to town Tuesday night. Our NBA betting preview backs the NBA betting underdog Hornets, spelling out a bad matchup for the home team.

This weird stretch of Toronto Raptors basketball continued over the weekend, as they followed up a solid win over the Wizards by falling flat on their face against the Trail Blazers on Sunday.

So, which version of the Raptors will we get when they host the high-octane Charlotte Hornets on Tuesday night? The one with the balanced offense and tenacious defense that can easily cover as slight home favorites or the one that makes the Hornets moneyline a sure thing?

Find out in our free NBA betting picks and predictions for Hornets vs. Raptors on January 25.

The Raptors opened this Eastern Conference matchup as 3-point favorites and have seen the early money, moving the line to 3.5. The total hit the board hit the board at 221.5 and has been bet up slightly to 222.5.

The Under is 4-0 in the Hornets' last four games as a road underdog and 7-1 in the Raptors' last eight games overall. Find more NBA betting trends for Hornets vs. Raptors.

Hornets vs Raptors picks and predictions

After a bit of an unlucky stretch that saw the Raptors lose four of five games, with three of those losses coming by five points or less, it looked like the Raps found their footing against the Wizards. That all came crashing down in an embarrassing loss to the Trail Blazers on Sunday.

That was a game where they were 8-point favorites but it seems like they forgot they even had a game that day. By half, they were trailing by 30 in what was an eventual 114-105 loss.

So, the question is what Raptors will we see in this matchup against the Hornets?

In theory, the Raptors match up well against a Hornets team that does create a buzz on offense but lacks in overall size. Toronto’s ability to switch all over the floor and create turnovers should play well here.

The problem is, the Raptors can get overly aggressive when going for those turnovers and double teams and are often caught with an opposing player open for a 3-point shot. As a result, they rank 27th in opponent 3-point shooting percentage.

That is not something you want to have happen too often against the Hornets. Charlotte attempts the sixth-most 3-pointers per game while ranking fourth in 3-point shooting percentage and has a roster full of guys not afraid to take shots from deep.

While the Hornets struggle on defense, so too can the Raptors' half-court offense, and with Fred VanVleet and Pascal Siakam not getting a ton of support at the moment, it can be hard for them to generate offense at times.

The Raptors' struggles on the perimeter will hurt them in this one against a Hornets team that loves to let it fly.

When it comes to the total, your first thought might be to look at the Over considering the Hornets' offense and their defense, which is bad enough to get the Raptors back on track, but this number should give you pause as it looks a touch too high.

For starters, a high-flying shooting team like the Hornets is, by its nature, a little streaky and right now, the Hornets are in a bit of a lull. Over their last seven games, they are averaging just 105.9 points per game, which ranks 24th in the NBA over that span.

Now they face a Raptors defense that has allowed just 103 points over that same stretch and will do so without Gordon Hayward for this matchup.

While the Hornets have slipped a bit on offense, they have picked up the effort on the other end of the floor, ranking second in the NBA in defensive rating over that stretch. And of course, the Raps rank 23rd in scoring this season and play at one of the slower paces in the league.

As we said, this number is too high.

We talked about the Raptors' issues guarding the 3-point line and one of the guys who can take advantage in this game is Hornets point guard LaMelo Ball.

Ball embodies this Hornets team and can be a very streaky shooter from long range. For example, he had a three-game stretch where he went 8-19 (42.1%) from beyond the arc but ended that run by going 0-8 last time out against the Hawks.

That said, he has hit three or more threes in eight of his previous 16 games, is shooting 36.3% from downtown, and gets a good matchup. So, getting plus +145 for him to go Over 2.5 in this one is really good value.

Did you know that if you parlayed today’s NBA Hornets vs. Raptors predictions and picks in a single-game parlay, you could win $79.29 on a $10 bet? 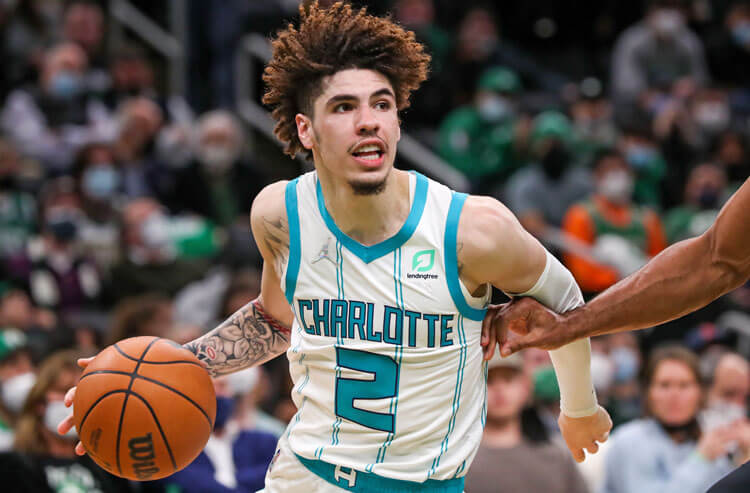