Lakers vs Clippers Picks: Klawed Apart by the Clips

After a brief absence, Kawhi Leonard has returned for an L.A. Clippers squad still fighting for the No. 1 seed in the Western Conference.

The Clippers snapped a three-game slide with a tough win over Toronto on Tuesday, failing to cover as 11-point home chalk. That marked the fifth straight blown cover for the Clips, who are giving eight points to the LeBron-less Lakers. The reigning NBA champs snuffed out their own losing skid last time out, grinding out a victory over Denver as 4-point underdogs Monday.

Here are our free NBA picks and predictions for Lakers vs. Clippers on May 6.

The Under is 10-2 in the Lakers' last 12 games vs. a team with a winning percentage of .600 or higher. Find more NBA betting trends for Lakers vs. Clippers.

One L.A. team returns a star player while another loses one, with Kawhi Leonard in and LeBron James out.

The Clippers welcomed Leonard back into the fray versus his former team on Tuesday, getting 13 points in more than 33 minutes of action versus Toronto. Leonard, who had missed time due to a foot injury, was denied heavily by the Raptors defense, which tried to take away the Clippers’ stars and make the role players beat them.

However, L.A.’s depth proved too much. Leonard and Paul George combined for only 35 points but guys like Marcus Morris Sr. and Reggie Jackson stepped up, while the return of guard Patrick Beverley bolstered a solid defensive effort from the Clippers, who locked down Toronto to just 18 points in the fourth quarter.

The Lakers’ offensive load is landing squarely on the shoulders of Anthony Davis, with James expected to miss two games while recovering from a nagging ankle injury and guard Dennis Schroder out due to COVID-19 protocols. Davis came up with a big game versus the Nuggets – 25 points – but has been slowly rounding into form since returning from a calf injury in mid-April.

Without LeBron drawing attention and Schroder keeping the Clippers’ perimeter busy, the Lakers playbook gets very one-dimensional. They’re not a great three-point shooting team and the post-up playbook of Davis and Andre Drummond faces a Clippers squad among the best at defending in the blocks (ranked second in points allowed to post-up plays).

The motivations of these two L.A. teams are contrasting as well. With LeBron sidelined and Schroder out, the Lakers are just trying to keep healthy and do just enough to stay inside the playoff picture. The Clippers, on the other hand, still have a shot at the No. 1 seed in the West, just 3.5 games back of Phoenix and Utah, while protecting their current standing at third.

The Lakers leaned on defense to stop the bleeding versus Denver and after watching what Toronto did on Tuesday, they’ll likely take a similar approach to deny the Clippers’ star players.

In their most recent meeting with the Clippers, the Purple and Gold limited Leonard and George to a collective 35 points without James and Davis in the lineup but lost 104-86, playing Under the 210-point total. Despite those stars coming in and out this season, this Lakers team is an elite stopper and sits No. 1 in the NBA’s defensive rating metric (106.5).

The return of Beverley and Leonard gives the Clippers their top two on-ball defenders back, setting their sights on Kyle Kuzma and Kentavious Caldwell-Pope – the Lakers’ top perimeter threats. Both Kuzma and Caldwell-Pope struggled in their last matchup with the Clips, combing for only 14 points on 5-of-19 shooting along with seven turnovers.

These La-La Land rivals have played Under in five of their past six meetings going back to last season.

Leonard may not have lit up the scoreboard Tuesday but he did contribute in other ways in the win over Toronto. On top of playing shutdown defense in the fourth quarter, the Klaw wrangled three rebounds and dished out five assists.

With the Lakers taking a page from the Raptors’ defensive strategy, Leonard can play more of a distributor role on Thursday, drawing doubles and find his teammates in space. He’s totaled 11 assists in his two games back from the foot injury and is averaging over five dimes on the season.

Leonard had eight assists in the win over the Lakers in early April and has recorded five or more assists in seven straight performances, going back to before his stint on the injured list. 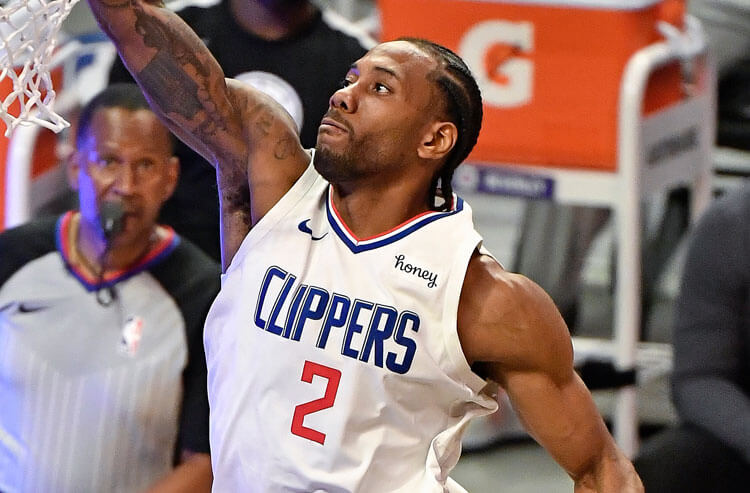 Lakers vs Clippers Picks: Klawed Apart by the Clips
Provided by

Mavericks vs Raptors Picks and Predictions: Raptors Can Flex on D vs Mavs
AJ Salah | Oct 23, 2021

Raptors vs Celtics Picks and Predictions: Raps' Offense Could Be in for Long Season
Rohit Ponnaiya | Oct 22, 2021