Kings vs Warriors Picks: Curry Too Spicy For Sacto

What happens when the league’s hottest player runs into one of its worst defenses? We’ll find out when Stephen Curry and the Golden State Warriors host the Sacramento Kings on Sunday night.

Curry is a 6-foot-3 inferno, scorching opponents for an average of more than 38 points on 52 percent shooting this month, all the while powering the Warriors to a 6-2 SU and ATS record in their last eight games. Golden State is a 7.5-point NBA betting favorite facing a Sacramento defense ranked among the bottom of the Association.

Check out our free NBA picks and predictions for Kings vs. Warriors on April 25.

Golden State dropped from -9.5 Saturday night to -7.5 by midmorning today at FanDuel, then late this afternoon ticked up a notch to -8, where the number sits at 7:30 p.m. ET. The Warriors are attracting 71 percent of spread tickets and 74 percent of spread money. The total opened at 229, peaked this evening at 232.5 and then went to 232, with the Over garnering 71 percent of tickets/79 percent of dollars.

The Warriors are 10-4 ATS in their last 14 home games vs. a team with a losing road record. Find more NBA betting trends for Kings vs. Warriors.

The Kings have enjoyed an extended hiatus since splitting a two-game set versus Minnesota at home, winning 128-125 but pushing as 3-point home faves on April 21. Sacramento was hoping that this break could help get some key players back on the floor, however, COVID-19 had other plans.

Leading scorer De'Aaron Fox will be out for at least 10 days as part of the league’s health and safety protocols, a huge hit ahead of this important matchup with Golden State. The Kings have only two wins in their past 12 outings and trail the Warriors by 5.5 games for the 10th spot in the West—and a ticket to the play-in tournament.

Meanwhile, Curry is padding his Hall of Fame legacy with an April to remember and putting in a last-second bid for the NBA’s Most Valuable Player, especially after scoring 32 points in a 118-97 victory over the Denver Nuggets and MVP-frontrunner Nikola Jokic on Friday.

Like always, Curry is lethal from beyond the arc and enters Sunday shooting 47 percent from deep this month, cashing in an average of 6.5 3-point makes per game. What’s more, Curry is also picking up plenty of freebies, getting to the line eight times per game in April and making nearly 92 percent of those foul shots. Sacramento sends foes to the stripe almost 23 times per contest—20th in the NBA.

Curry missed the last meeting with Sacramento on March 25, which the Kings won 141-119, but led Golden State with 30 points in a 137-106 victory at home on January 4. Despite their own injuries, the Warriors seem to be locked in for this postseason push and will overwhelm a Kings attack that can’t match the 3-point threats while missing its top scorer.

Defensively, Golden State is one of the better teams in the NBA at defending the interior. And that would matchup up well with a Sacramento offense that thrives on getting to the basket, with an average of 53.4 points in the paint per outing. However, the Dubs are down some big bodies, namely James Wiseman and Eric Paschall, and the Kings are expecting center Richaun Holmes (14.1 ppg) back in action Sunday.

The Warriors could be happy to trade 2-pointers for 3-balls in this contest. Sacramento is the second-worst 3-point defense in the NBA, allowing opponents to hit 38.9 percent of their long-range looks for an average of almost 13 triples a contest. In their two games with Minnesota last week, the Kings gave up a collective 33 for 77 from beyond the arc to a Timberwolves team not known for its range. Now, Sacto takes on the Dubs’ 3-point barrage and the greatest shooter in NBA history.

The Kings and Warriors played Over in each of their last two meetings (totals of 229 w/o Curry and 235.5) and will topple this number Sunday night, with Golden State doing the lion’s share of the scoring.

It’s not just the points piling up for Curry this month. The veteran point guard is averaging nearly five assists and more than six rebounds over those dozen games.

Curry has been very active on the boards in recent efforts, with rebounding totals of eight, seven and seven in three of his last four contests. The Kings are one of the worst teams at cleaning the glass in the NBA — rebound rate of just 48.7 percent — and have been bullied by rival guards on the boards this month, allowing 31 rebounds per game to the position in April.

For his career, Curry averages 22.6 points, 7.6 assists and five rebounds in 34 all-time meetings with Sacramento but posted a stat line of 30 points, eight assists and nine boards in his most recent clash with the Kings on January 4. 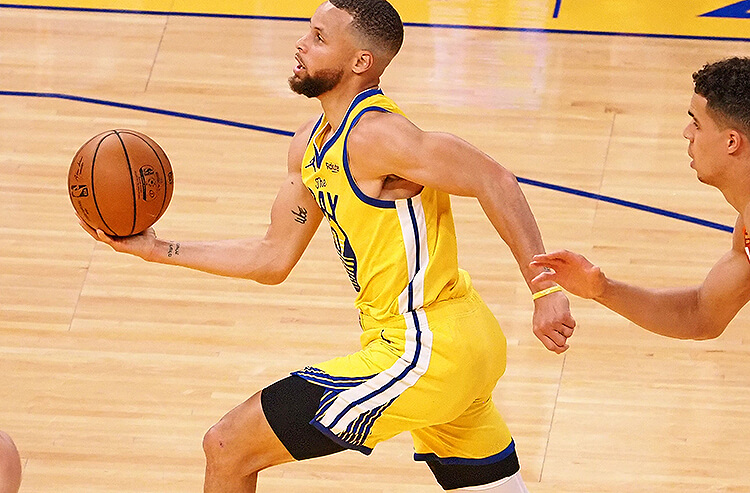 Kings vs Warriors Picks: Curry Too Spicy For Sacto
Provided by