All-Star Devin Booker is averaging a team-high 25.7 points per game for a Phoenix Suns team that ranks sixth in the NBA in offensive efficiency.

There are only four games on the NBA betting board on Thursday, including what looks to be a lopsided matchup between the Phoenix Suns and Sacramento Kings.

The Suns have been one of the best teams in the league while the Kings are one of the worst, and the odds for this game reflect that with Phoenix currently installed as a 12.5-point home favorite.

Here are our best free NBA picks and predictions for the Suns vs. Kings on Thursday, April 15, with tipoff at 10 p.m. ET.

The Suns are 22-9 ATS in their last 31 games as a favorite. Find more NBA betting trends for Kings vs. Suns.

The Kings are fresh off a 123-111 loss to the Wizards on Wednesday night and have lost eight games in a row, going 1-7 ATS over that span.

It doesn't get any easier for them tonight as they travel to Phoenix to take on the Suns, who have won 10 of their last 11 contests and are coming off a 20-point win over the Heat.

The Kings have been solid on offense, thanks in large part to guard De'Aaron Fox who leads the team with 25.2 points and 7.1 assists per game. They've been losing because of terrible defensive play, as Sacramento ranks dead last in the NBA in points per game allowed (118.7) and opponent field goal percentage (48.9).

Sacramento hasn't just been losing games, it has been getting stomped. The Kings have an average scoring margin of -11.6 ppg over their eight-game losing streak, including double-digit losses to the Wizards, Pistons, and Timberwolves.

If they are getting crushed by teams like that, I don't have much faith in them against the team with the second-best record in the league. Especially with Phoenix going 9-1 SU and 7-3 ATS when installed as a double-digit fave this season. Back the Suns.

The Suns play at a slower tempo and have been one of the better defensive squads in the league, limiting opponents to 107.7 points per game.

The Suns are fresh off an outstanding defensive effort, holding the Heat to just 86 points on 38 percent shooting. They also held the Kings to 100 and 106 points in two previous meetings this season. Back the Under.

This hasn't been a great year for Kings fans but they should be excited by the promise that rookie Tyrese Haliburton has shown. The 12th pick in last year's draft currently has the second-best odds to win Rookie of the Year, averaging 12.9 points and 5.1 assists per game.

He's coming off a game where he dropped six dimes against the Wizards and has racked up at least six assists in five of his previous six contests. Expect Haliburton to see his role with the Kings increase over the last month of the season and take the Over 4.5 on his assists total. 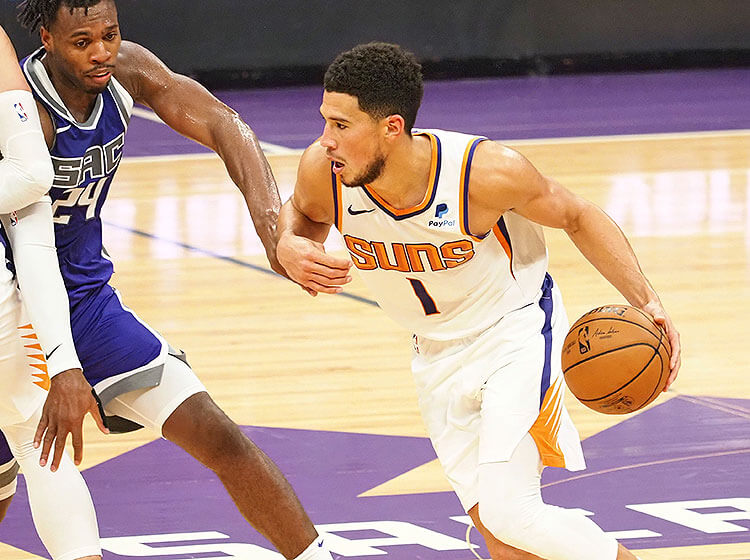 Kings vs Suns Picks: Phoenix Can't Be Stopped
Provided by