Jazz vs Nuggets Picks and Predictions for January 17

The Utah Jazz put their four-game winning streak on the line when they visit the Denver Nuggets on Sunday night.

The NBA betting odds opened Denver as a 1-point favorite for the first meeting between these division rivals since their memorable opening-round playoff series in the Orlando bubble last summer. The Nuggets battled back from a 3-1 hole to steal the series in seven games, so these teams are very familiar with each other and Sunday’s matchup will carry over some of that playoff intensity.

These are our NBA free picks and predictions for Jazz vs. Nuggets on January 17.

The Under is 16-5 in the last 21 meetings in Denver. Find more NBA betting trends for Jazz vs. Nuggets.

There’s nothing like a loss to the New York Knicks to serve as a wake-up call. Ever since losing at New York on January 6, Utah has been red hot. The Jazz have strung together four straight victories with an average margin of plus-19.25 points in that span, easily crushing the point spread in each of those outings—three of which came on the road.

Granted, Sunday’s showdown with Denver is a step up in competition compared to previous foes like Atlanta, Detroit, and Cleveland. However, Utah did knock off the Milwaukee Bucks at home to start this streak and there’s no lack of motivation for this Northwest Division matchup after what happened in the postseason last year.

The Jazz have been smothering on defense, especially on the perimeter, during this run allowing only 44.1 points per game to opposing guards. That includes staking their claim on the 3-point arc, limiting rival guards to less than 24 percent shooting success from outside in those four wins.

Denver point guard Jamal Murray, who was the catalyst for the Nuggets’ comeback in the 2020 Western Conference quarterfinals, will draw the ire of the Utah defense Sunday. He’s been inconsistent to start the new season and has struggled from outside over Denver’s past four games, averaging only 15 points and hitting a mere 30 percent of his looks from distance (6 for 20) in that span.

Murray has been missing back up in the backcourt with Gary Harris sitting out games due to personal reasons and versatile forward Michael Porter Jr. sidelined due to COVID-19. The Nuggets could use all the firepower they have to counter this Jazz offense, which has posted 115 points per game in the last four outings—60 of those tallies coming from outside where Utah is making 45.2 percent of its attempts.

Denver is always a tough place to play (especially with Utah’s road-heavy sked) but with momentum and motivation fueling the Jazz, we’re taking the short road dog Sunday night.

The Over was the popular pick when these divisional foes met in the bubble last August, cashing in five of the seven games that series. But don’t expect dueling 50-point efforts from Murray and Jazz standout Donovan Mitchell in this first meeting of 2021.

Both of these clubs rank toward the backend of pace to start the new NBA season, with Utah ranked 22nd and Denver tied for 24th in terms of tempo. The Jazz have stayed below the total in four of their last five games while the Nuggets – one of the best Over bets at 9-3 O/U on the season – have started trending toward the Under, going below the number in two of their last three as books tack on extra points to the total.

With the Jazz able to crackdown on perimeter players, the bulk of the Nuggets’ offense will flow through versatile big man Nikola Jokic, who leads the team in scoring with just over 24 points a contest. Jokic will butt heads with Utah frontcourt stopper Rudy Gobert once again after getting the best of Gobert last season, including stretching the Jazz defense by hitting almost 48 percent of his 3-point looks during that playoff series.

Gobert will need to come out to the perimeter to get a hand up on Jokic, who’s not shooting nearly as well from outside (36.8 percent) and Utah will concede the extra interior space to Denver forwards Bol Bol and Paul Milsap—not the greatest offensive threats. Utah’s defense will gladly trade 2-point attempts from the Nuggets’ role players for a quiet night beyond the arc from Jokic and Murray.

As for Denver’s defense, the potential return of Harris (missed two games for personal reasons and practiced Saturday) combined with fellow guard Will Barton gives the Nuggets two solid perimeter defenders to throw at Mitchell. Both missed time with injuries when the team met Utah in the postseason last year, playing a big role in Spida’s scoring eruption.

Veteran guard Mike Conley continues to do it all for this Utah squad and was a thorn in the side of the Nuggets when these teams squared off in Disney World last summer.

Conley, who averaged just under 20 points per game in the seven-game set versus Denver, is posting an average stat line of 16.5 points, 7.25 assists, 4.5 rebounds, and 1.5 steals per game during the Jazz’s four-game winning streak.

With the Nuggets throwing everything at Mitchell on Sunday night, expect Conley to have plenty of clear air to work and put in another busy night on the box score. 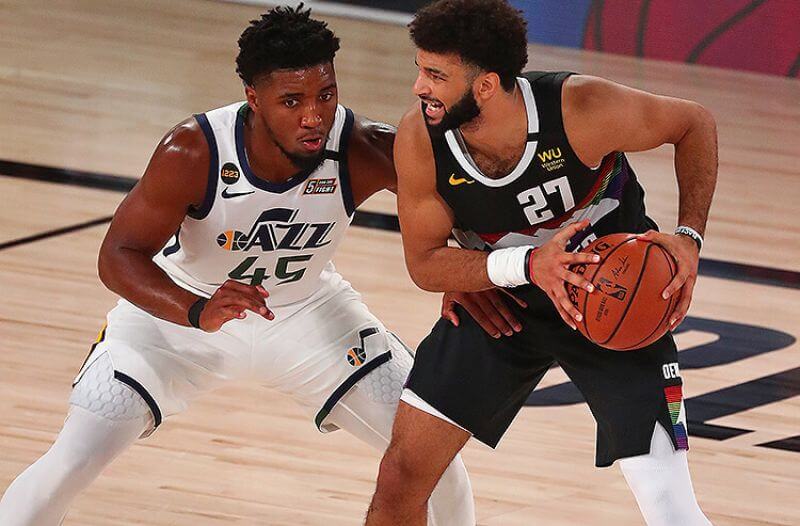 Jazz vs Nuggets Picks and Predictions for January 17
Provided by