The NBA Finals heads to Boston knotted up at 1-1, with just a couple of wild quarters the difference through two games. Find out which team will grab control of the series with our Warriors vs. Celtics NBA betting picks. 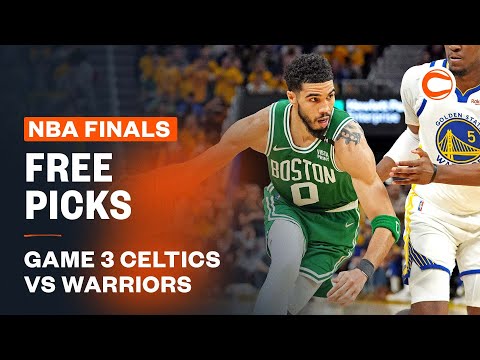 A 19-point loss to the Golden State Warriors in Game 2 of the NBA Finals took the shine off the Boston Celtics’ series opening-victory, but it was mission accomplished for the C's after those two contests in the Bay Area.

Boston did what it wanted to flip home court on Golden State as the championship series heads to TD Garden for Game 3 on Wednesday. Books have the home side installed as 3.5-point favorites, knowing this team has shown an incredible ability to bounce back from defeat.

Here are our free NBA betting picks and predictions for Warriors at Celtics on June 8.

Be sure to also check out Rohit Ponnaiya's player prop picks for Game 3.

Following Game 2, Boston opened as a 3.5-point home favorite for Game 3 with that line bouncing between that opening spread and -3 at some sportsbooks. As of Monday morning, Celtics -3.5 is the market consensus. As for the total, it hit the board as big as 213 points and slimmed to 212.5.

A) Jayson Tatum or Jaylen Brown to score 30+ points BOOSTED to +150 at Betway! Claim Now

B) Celtics to win + Al Horford to record a double-double BOOSTED to +325 at BetRivers! Claim Now

Boston is 26-11 SU and 24-13 ATS when coming off a loss this season, including 6-0 SU and ATS off a loss in the playoffs. The Under is also 22-15 overall in those bounce-back contests, going 4-2 in those postseason spots. Find more NBA betting trends for Warriors vs. Celtics.

So far, the NBA Finals have left us with more questions than answers as it pertains to these two teams. The 2022 postseason trend of one-sided finishes (first two games decided by 12 and 19 points) continues to cloud the competitive comparisons.

If you break down the two games in Golden State by quarters, then the Dubs are your leader in the clubhouse. The Warriors came out swinging in Game 1, traded shots for the second and third frames, before Boston abruptly caught fire in the fourth and pulled away.

Game 2 played out a little different, with a physical first half about as tight as could be. Then Golden State exploded in the third quarter, running out to a 35-14 count in those 12 minutes en route to a rout in front of the hungry Chase Center crowd.

Were those Celtics the same ones that trailed by 15 in Game 1? Or did Boston cut bait in the midst of the Warriors’ Game 2 surge, knowing that it had done what it came to San Francisco to do: Split on the road.

Outside of that third-quarter explosion, Golden State didn’t play overly well in Game 2. It missed plenty of close-range looks inside the paint, and saw other soft takes get turned away by seven blocks from Boston’s defense. Subtract a hot third quarter from the overall shooting success, and the Warriors went 28-for-63 from the field (44%) including an 8-for-25 count (32%) from beyond the arc.

Key contributors Klay Thompson and Andrew Wiggins struggled to find their form for the majority of the game, shooting a combined 8-for-31 from the floor (3-for-11 from outside). Sixth man Jordan Poole also looked like his Game 1 woes would stick around (1-for-5 with three points in 1H) until he went 5-for-9 for 14 second-half points — eight of which came in garbage time in the fourth quarter.

Helping mask those offensive issues was the Celtics’ sloppy play, which handed over plenty of extra possessions, committing 18 turnovers and giving up 33 points off those giveaways. While some of that is due to the Warriors’ aggressive defense, turnover troubles have plagued Boston throughout the postseason.

With the series switching to Beantown, the Celtics now hold home court. Golden State did a fantastic job defending in Game 2, but Boston still shot 15-for-37 from distance, and is making better than 46% from 3-point range in the first two games of the finals — a big jump from 34.9% in the conference finals — thanks to the flame-on fourth in Game 1.

Now the C's get to go back home with an extended break between games (which is huge for the health of key defenders Marcus Smart and Robert Williams), sleep in their own beds, and play at home in front of their fans — something the Celtics haven’t done in almost two weeks (Game 6 vs. Miami on May 27).

After two “freak” quarters decided the first two games of the NBA Finals, we’re back to square one in Game 3 (according to the NBA Finals odds price at -110 aside) and giving the nod to the home team.

Golden State’s third quarter in Game 2 was an impressive offensive display, but that overall victory was a testament to the Warriors’ defense. The Dubs were aggressive from the tip — with Draymond Green going after Al Horford — and they stayed very active in the passing lanes, which played a role in Boston’s turnover woes.

For all that physicality, the officials didn’t blow the whistle that often. A total of 35 personal fouls were called in Game 2 and only 29 were racked up in Game 1, despite the Warriors and Celtics boding each other on both ends. This is a pretty steep decline in whistles compared to the foul averages for these teams entering the Finals.

The refs are letting these guys play, with a mere 51 collective points scored from the foul line with the clock stopped through the opening pair of games. And with two of the top defensive clubs in the NBA doing battle, you can expect a few days off to really tighten the bolts on matchups, switch schemes, and approach to slowing superstars.

Boston and Golden State are shooting around 69% of their field goals with 15 seconds or less left on the shot clock, including 22% of those attempts coming with seven seconds or fewer left on the 24-second ticker. As these teams get more familiar, ball movement and action away from the basketball will be vital to creating looks, which all take time to unfold.

Given the second halves in this series have produced some weirdo results, the first half metrics may be the best way to judge these teams. The Celtics and Warriors own twin defensive ratings of 107.1 in those first halves — which is pretty much where these teams sat in the regular season — ranked No. 1 and No. 2 in that advanced metric.

With Boston cleaning up turnovers and Golden State’s struggling scorers like Thompson and Poole trying to get right on the road, Under bettors should put in their mouthguard for a bruising battle in Beantown on Wednesday.

We talked about the time between home stands for the Celtics, who haven’t played in front of the Boston faithful since May 27. But how about the lack of road wear on the Warriors?

I guess it’s what you play for when going after higher seeding and home court, leaving Wednesday’s Game 3 in TD Garden as Golden State’s first road game since May 24 — and just the team’s fourth away tilt since May 4.

The Dubs have been less than dominant as a visitor in the postseason, with a 3-4 straight up mark and 2-5 count against the spread. Golden State, which owns an average margin of +12.6 inside the Chase Center in the playoffs, sees that split drop to -6.3 in those seven postseason road games.

Also, let’s not forget that Ime Udoka’s team is a remarkable 6-0 SU and ATS off a loss in the playoffs, while going 26-11 SU and 24-13 ATS (65%) off a loss on the entire season. With Klay still struggling to find a rhythm, along with some of Golden State's other key contributors, this task may be too tall for NBA Finals MVP betting favorite Stephen Curry to overcome by himself.

Did you know that if you parlayed today’s NBA Warriors vs. Celtics predictions and picks in a single-game parlay, you could win $50.42 on a $10 bet?

Warriors vs Celtics NBA Finals Game 3 Picks and Predictions: Dubs Get Dummied In Beantown
Provided by