We've arrived at Game 3 of the NBA Finals with the series tied as it swings to Boston. After two unpredictable games in the Bay, we're focusing on the Celtics' backcourt and Draymond Green is in our best NBA player prop picks for Warriors vs. Celtics. 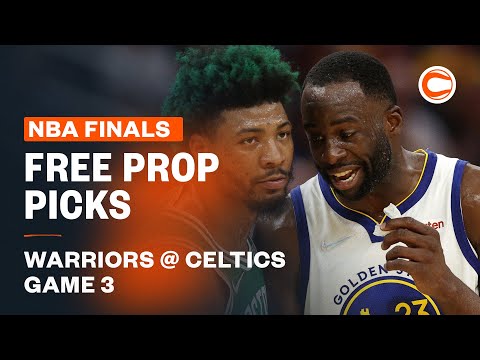 The NBA Finals shifts to Boston with the series tied up ahead of Game 3. Back on their home floor, the Celtics will try to bounce back from an ugly loss on Sunday, when the Warriors ran away with it in an explosive third quarter.

We're expecting them to perform better — at least on the offensive end of the floor — as we're backing two members of Boston's backcourt, while also fading Golden State's Draymond Green.

Here are our best free NBA player prop picks for Game 3 of the NBA Finals on Wednesday, June 8.

Be sure to also check out Jason Logan's full betting analysis for Game 3.

After a strong first quarter in Game 2 on Sunday, the Celtics mustered just 34 points in the next two frames, before resting most of their starters with the game already out of hand by the fourth. Poor shot selection and sloppy turnovers were a big reason for Boston's ugly offensive showing, but we're expecting a bounce-back performance at home.

The Warriors have been a juggernaut at home, going a sizzling 10-1 with a net rating of plus-12.5 in the playoffs at Chase Center. However, they've been far more vulnerable on the road, especially defensively.

While they're holding foes to just 103.5 points per game on 42.7% shooting in 11 postseason games at home, they're surrendering 116.3 ppg on 46.4% shooting in seven road contests. That follows a similar trend from the regular season where Golden State's defensive rating was an NBA best 103.6 at Chase, but dipped to 109.7 in away contests.

Despite shooting just 4-for-13 from the field on Sunday, Celtics guard Derrick White finished with 12 points, cashing the Over on his points total of 9.5 (juiced towards the Over at -135). While his points total has ticked up to 11.5 for Game 3, he's gone Over that number in five of his last six games. He's averaging 15 points in 30.7 minutes per game over that span, and in the one contest where he scored fewer than 12 points, he logged just 19 minutes.

White has turned into Boston's most important backup during the postseason, and the Celtics need him on the floor as a secondary ball-handler to break down Golden State's defense. If the C's have any shot of leaving this game as NBA Finals betting favorites, he'll need to give it his all. Take the Over on White's points total.

Smart with the ball

Marcus Smart was one of Boston's best players in Game 1, scoring 18 points and dropping four dimes without a single turnover. But he was much sloppier in Game 2, scoring just two points and turning the ball over five times in just 25 minutes. Although he may not be the betting favorite to win the NBA Finals MVP, he still plays a major part in this team's success.

We're expecting a much steadier performance from Smart in Game 3, since that last outing was a stark outlier. The O/U on Smart's turnovers total is set at 2.5, a number he had gone below in seven of his previous eight games before Sunday.

We're banking on Marcus to play a bit "Smarter" (hehe) on Wednesday and betting the Under on his turnovers total.

When looking at which player on the Warriors holds the highest prop value, there is plenty of options to choose from. Steph is always fun to bet on, and Klay Thompson has plenty of intriguing props. However, today we'll be looking at the man who is seen as the glue of the Dubs.

Warriors' big man Draymond Green was pivotal to their win in Game 2, whether it was throwing blocks like an old-school NFL fullback — or trying to pull down Jaylen Brown's shorts. Green dropped seven dimes with just one turnover and his physicality and pesky play was invaluable.

However, he also pulled down just five rebounds in 35 minutes during the contest. The O/U on Green's rebounds total for Game 3 is set at 7.5, a number he has surpassed in just one of his last six games.

Green has grabbed fewer than eight boards in 12 of 18 playoff games (66.7%), and with teammate Kevon Looney logging minutes and also fighting on the glass, we're fading him on this number.