Clippers vs Raptors Picks: Do Raps Have Enough Tonight?

Kawhi Leonard and the Clippers look to close their season out strong, but Tuesday's matchup with the Raptors' bench might not prove much of a test.

Welcome to NBA regular-season garbage time! The Toronto Raptors are waving the white flag on this woeful campaign, sitting their four best players for a Tuesday tilt with the Los Angeles Clippers.

The Clips are in a weird jockeying match to avoid playing the Lakers in the first round, and aren't resting Paul George, or Kawhi Leonard against his old squad. Expect a full effort from them tonight.

Let's break down how it should play out with our free Clippers vs. Raptors picks and predictions for May 11.

The Clippers hit TwinSpires' odds board as 11.5-point favorites and steadily climbed to -13.5, where the line stands at 4 p.m. ET. Los Angeles is landing 70 percent of bets and 74 percent of money on the point spread. The total is down 2.5 points to 218, with ticket count and money both running 2/1 on the Under.

Under is 10-1-1 in Clippers' last 12 games. Find more NBA betting trends for Clippers vs. Raptors.

The Raptors are finally rolling over, after being forced to spend the entire season playing on the road, catching COVID, and multiple other nick-nack issues and injuries that understandably derailed their season.

Toronto was eliminated with their last loss, now 4.5 games back of the 10th spot in the East with four games remaining. As such, their top dudes (several of whom were banged up to begin with) are getting what appears to be an early vacation.

The Clippers, meanwhile, should be expected to be in top form. They're resting neither of their soon-to-be-All-NBA stars, and want to ensure they're playing their best basketball heading into the postseason.

L.A. has been guilty of some complacency and inconsistency, especially coming from a team that still has plenty to prove after buckling in last year's bubble. This is exactly the kind of spot where they'll want to ensure they can consistently bring it every night, even when they think they can afford not to. For what it's worth, they're 7-6 against double-digit spreads this season.

But this Raptors lineup is just way too depleted, and can't even hope to compete with the NBA's second-ranked offense. The Clippers are going to be too motivated to build a big lead, keep it there, and rest their stars where they can.

Toronto is also officially incentivized to lose here, lest the Bulls tank better (Chicago plays the Raptors on Thursday and the Nets, Nets and Bucks to close their season) and steal lottery equity. Count on L.A. to make this one quick and painless.

If you checked our "Betting Trend to Know" above, then you're aware that the Clippers are riding one of the NBA season's best Over/Under trends, at 10-1-1 to the Under since April 14.

And this is pretty close to a dream matchup for that trend to continue. The Raptors essentially de-clawed themselves on offense. Gary Trent Jr. is a solid scoring option but will be in tough with either Leonard or George on him the entire night. Rookie PG Malachi Flynn will be the only other player who can even moonlight as a go-to scorer for them.

L.A. has shown a tendency to run up the score at several times this season, but lately have been yielding much more methodical, defense-first results, hence the huge Under streak.

We're expecting a blowout here, which could grind things to a halt and take the Clippers' best players off the floor. We're also expecting Toronto to struggle to hit 100 points. Take the Under here.

We don't want to call Gary Trent Jr. irrationally confident – he's proven himself a very talented two-way player – but the guy isn't the slightest bit shy about firing away.

Trent's averaging 16.6 ppg with the Raptors so far, oscillating between bench scorer and quasi-fourth option while plugging frequent holes in their starting lineup.

He'll have the ultimate green light tonight, and we really don't see who the hell else is going step up and take the lead for Toronto's offense.

Someone will have to put the ball in the net for the Raptors, and even if Kawhi and PG are checking Trent, we don't see their efforts – or playing time – remaining on full once the Clippers get up big. Count on Trent to find a way to put up 20+ tonight. 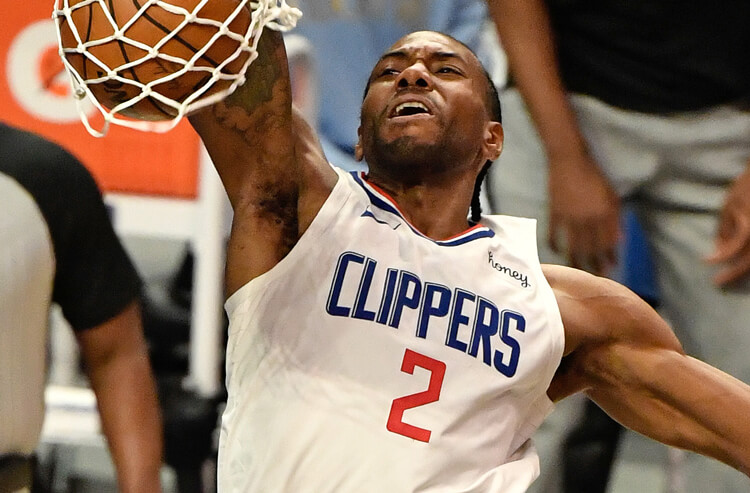 Clippers vs Raptors Picks: Do Raps Have Enough Tonight?
Provided by