With a healthy increase in shot attempts in recent weeks, Julius Randle has very much had to put the Knicks on his back. There's no reason that won't be the case again tonight when they welcome the Cavaliers into MSG.

If there were a current NBA coach I wouldn't want to be right now, it's Tom Thibodeau of the New York Knicks. With another losing season likely on the horizon, it's becoming clearer by the day a drastic move has to take place soon, which could mean the head coaching position.

The Knicks were run off the court at home Saturday afternoon as Luka Doncic, and the Dallas Mavericks moonwalked to an easy 121-100 victory. Tonight, the conception gets even more challenging as the Cleveland Cavaliers (15-8) are next up.

The Cavaliers will bring an undermanned team into town, but that shouldn't faze the impressive young team from marching into MSG and getting a victory despite facing Julius Randle, who will likely force his way into putting the Knicks on his back yet again.

Find out where the best betting value lies in our NBA picks and predictions for Cavaliers vs. Knicks below.

Cavaliers vs Knicks picks and predictions

It wasn't all doom and gloom for the Knicks on Saturday afternoon. Julius Randle did a terrific job of keeping them in the game in the first half and rounded out a 24-point, five-rebound performance. However, he was held to only a troublesome three points after intermission.

Randle is averaging 21.8 points and 7.6 rebounds over his last 10 games. He already appears to have shaken off whatever serious struggles he was going through last season that had many fans calling for him to be traded. Tonight is the second night of a back-to-back, which has actually been a bright spot for Randle this season.

It's always best to proceed carefully when betting on a player on the second night of a back-to-back, but Randle's conditioning has proven stellar. Randle is averaging 26.5 points and 9.7 rebounds in those situations.

In the last matchup between these teams during the early portion of the season, Randle combined for 24 points + rebounds, but a lot has changed since then. Randle only took 13 shots in that game. In the last 10, he's averaging 16.5 shot attempts per game.

Cleveland will throw several looks at him, with Evan Mobley taking on the primary responsibility of slowing down Randle. In the 10 matchups Randle has played vs. Cleveland since coming to the Knicks in 2019, the big man is averaging 21.3 points and 8.9 rebounds. I like his chances to go Over 28.5 points + rebounds again tonight.

The Knicks are a struggling unit that doesn't fare well against teams with high-level star power. Yesterday afternoon's game was a great example of just that. The Knicks battled for the first half, and then the dominance of Luka Doncic took over the game. In the third quarter, Doncic scored 19 while New York scored just 15 as a team.

Tonight won't be any different, as they'll have to see Donovan Mitchell and the high-powered Cavaliers, who have won seven of their last 10 games. Mitchell is one of the most lethal scoring options in the game today and will likely remind New York of how critical of a mistake it was not to close a deal for him during the summer. For the season, the 26-year-old guard is averaging 28.7 points per game.

Today will be a tough climb for the Knicks, as the Cavaliers are 11-3-2 ATS whenever they are the favorites in a game. Cleveland is a predictable favorite today, as the Knicks will likely come out slow and tired after playing Dallas yesterday afternoon.

The Cavaliers aren't a great road team as far as their ATS record goes, but this is an ideal spot for them to cover the spread as the Knicks appear to be reeling. Keep an eye out for the magic number of 116.4. That's the number of points the Knicks give up per night. When the Cavaliers score over that mark, they are 5-3 ATS.

The Knicks are coming off of a game where they got nothing going against the Mavericks and now have to face a Cleveland team ranked first defensively (105.6 ppg). How will this Knicks team score points outside of Julius Randle?

Point guard Jalen Brunson has struggled of late, failing to score 18 or more points in his last three games. In the previous New York and Cleveland matchup in October, the teams combined to secure the Over by nine points.

Tonight feels like the Under could be a more confident play. The Cavaliers will be without their rim protector in Jarrett Allen, and the team tends to score more on a nightly basis when he's in the lineup.

Allen has missed six games this season, and the Cavaliers' points per game drop by 9.9 points when he's not in the lineup. The Cavaliers will win tonight, but this won't be a high-scoring affair.

The Under is 4-0 in the Cavaliers' last four games overall. Find more NBA betting trends for Cavaliers vs. Knicks. 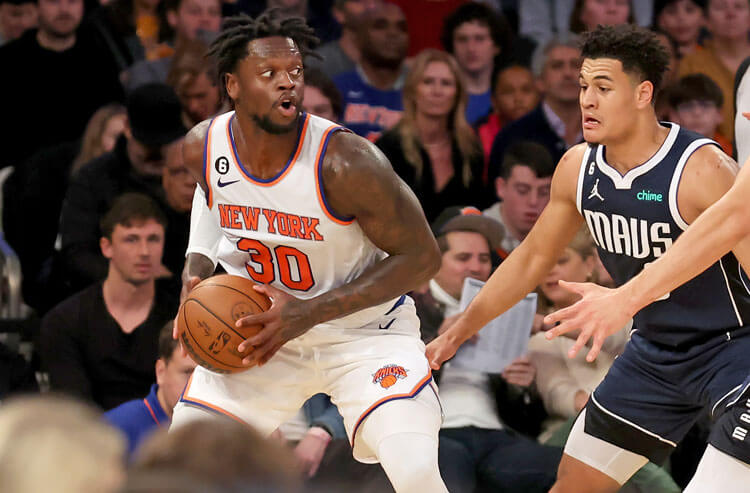