76ers vs Warriors Picks and Predictions: Sixers Spread Too Thin

Golden State has been crushing opponents lately, so is there much hope for injury-laden Philly? Find out which side can overcome this huge spread as we break down our 76ers vs. Warriors NBA betting picks.

On Wednesday, Steph Curry and the Golden State Warriors will be going for their fifth win in a row when they take on a Philadelphia 76ers team that has won two of its last three. The Sixers are extremely banged up right now, but they’re finding ways to pull out victories.

Can Philadelphia roll into the Chase Center and give Golden State a game? Keep reading our Sixers vs. Warriors picks and predictions to find out.

The Warriors have been double-digit favorites since this line opened, with the team laying 10.5 right from the jump. Now, you might find Golden State as an 11-point favorite, depending on where you look. The total opened at 217.5 for this game, and it’s now down to 216.5 or 216.

The Warriors are 20-5-1 against the spread in their last 26 games. Find more NBA betting trends for 76ers vs. Warriors.

76ers vs Warriors picks and predictions

The Sixers will be without Joel Embiid until Saturday, at the earliest. Philadelphia has done a nice job of staying competitive despite all of its injuries, with Tyrese Maxey being a huge reason why. The second-year guard is averaging 18.7 points and 4.6 assists per game this season, and he has really helped Sixers fans forget about the absence of Ben Simmons. The problem for Maxey and the Sixers is that this Warriors team simply has too much firepower.

Not only is Curry averaging 28.4 points and 6.6 assists per game this season, but Jordan Poole is also averaging 18.4 points per game for the Warriors. When Curry isn’t going off, Poole is usually scoring points in bunches. Over the last two games, the 22-year-old has scored a total of 65 points, and he has done so on 12-of-19 shooting from three. It’s just unfair for opponents to have to deal with Curry’s three-point barrages and then not even have a breather when Poole starts heating up.

With two guys like that, along with the strong two-way play of Draymond Green and Andrew Wiggins, it’s just not fair to ask a shorthanded Sixers team to hang with the Warriors. Golden State goes on ferocious runs these days, so any poor stretches from Philadelphia can result in the Warriors opening up a huge lead. Without Embiid to stabilize things, you can expect at least one or two of those runs here.

Over the last two seasons, the Under is 18-7 when Philadelphia is coming off back-to-back games of scoring 105 or fewer points. The Sixers now have to face a Warriors team that is first in the league in defensive rating this year, making it hard to envision how they’ll generate easy points. Also, that task will be even tougher for Golden State if Tobias Harris is unable to play. While Maxey is more than capable of creating shots for himself, he’s going to have a harder time if he’s the only player on the roster that is a threat to do so.

Also, if this game does turn into a blowout, that only helps Under bettors. Golden State would begin to run out a little clock, and Philadelphia would end up settling for bad shots in an attempt to make things happen faster.

When the Warriors win games, this team does so extremely convincingly. In Golden State’s 14 wins this season, Steve Kerr’s group has covered the spread in 13 of them. The Warriors have also been favored by double digits twice this season, and they won those two games by an average of 17.0 points per game. Both of those games were played at the Chase Center, where a fired-up home crowd helps to fuel Curry and the rest of these guys when they get it going from three.

Did you know that if you parlayed today’s NBA 76ers vs. Warriors predictions and picks in a single-game parlay, you could win $26.45 on a $10 bet? 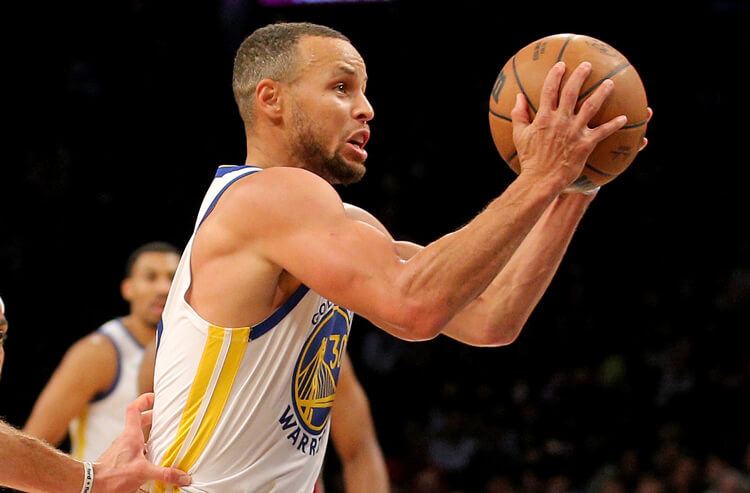 76ers vs Warriors Picks and Predictions: Sixers Spread Too Thin
Provided by