Down 2-0 to the 76ers, Toronto's first-round playoff series now shifts to Scotiabank Arena for a must-win Game 3. Can desperation carry the banged-up Raptors to victory? Read our NBA betting picks and predictions to find out.

The first-round series between the Philadelphia 76ers and Toronto Raptors heads to Canada for Game 3 with the Raps trying to dig themselves out of a 2-0 hole.

Oddsmakers have priced Toronto's desperation into this line, with NBA betting lines opening with the Raptors as slim 2-point home underdogs in what is practically a must-win spot.

Here are our best free 76ers vs. Raptors NBA picks and predictions for Wednesday, April 20, with tipoff at 8:00 p.m. ET.

This line hit the board with the 76ers installed as 2-point favorites with the Over/Under at 214.5. The line has shortened to -1.5 at most books as of noon ET with the total moving up to 216.5.

The Raptors are 26-11 ATS in their last 37 games versus a team with a winning record. Find more NBA betting trends for 76ers vs. Raptors.

76ers vs Raptors picks and predictions

After struggling against the Raptors during the regular season, any questions about how the 76ers would perform in the first round have been erased by a pair of double-digit wins. Philly crushed the Raps by 20 points in the series opener before a 112-97 dusting on Monday night.

The Raps really missed rookie Scottie Barnes in Game 2 while Gary Trent Jr. battled through an illness. Barnes is listed as doubtful but took part in the morning shootaround without his walking boot and although Trent was ineffective on Monday (0-4 from the field with four fouls in 10 minutes) he is expected to start and should be feeling better.

Toronto's biggest problem in this series has been a lack of elite talent against a Sixers squad featuring two of the best players in the world in Joel Embiid and James Harden. The other major problem for the Raps (or the biggest if you listen to coach Nick Nurse) has been the disparity in fouls called with Philly enjoying a 64-35 edge in free-throw attempts through the first two games.

Marc Davis is officiating today and has called an average of 37 fouls per game this season (2.2 below the league average) while also having the reputation of being a ref who swallows his whistle in physical contests.

The Sixers have also gone an incredible 30-62 (48.4%) from beyond the arc in the series, a mark that's unsustainable even for a sharpshooting squad like Philly.

Ultimately, we expect some regression when it comes to the 76ers' 3-point shooting and trips to the charity stripe and that should benefit a Raptors team that has its back against the wall.

With the Sixers 0-5 ATS in their last five away games and the Raptors 10-3 ATS in their previous 13 home games against a team with a winning record on the road, we'll back the home side in a pivotal Game 3.

Much has been made over the fact that the 76ers will be without their best perimeter defender in Matisse Thybulle in Toronto due to his vaccination status, but Thybulle is a liability on offense and logged a total of just 29 minutes in the first two games of the series.

Without Thybulle, the 76ers take a step back on defense but more time with Embiid, Harden, Tyrese Maxey, and Tobias Harris on the court means more offensive firepower.

The Raptors simply don't have anybody to guard Embiid (and apparently can't defend Maxey either) and while Harden continues to shoot like a stormtrooper, he's been doing a good job of finding the open man.

That said, the Raps have some dynamic scoring options of their own including Pascal Siakam, Fred VanVleet, and OG Anunoby who all hit the 20-point plateau in Game 2.

The Raptors put up mediocre scoring numbers during the regular season but that was deflated by significant stretches where their lineup was decimated by injuries and COVID. Since the start of the new year, the Raps have actually ranked ninth in the league with 115.6 ppg at home. We're leaning towards the Over here.

Make picks on tonight's Raptors game for a chance to win Covers swag!

One of the best bets in the NBA postseason used to be backing a team in the first half when they were heading home with a 2-0 series deficit.

However, that trend has gone just 11-12-2 ATS since 2018 with books now skewing the derivatives in favor of the more motivated side. That holds true in this one with the Raps installed as 2-point dogs for the full-game spread but sitting at 1-point faves in the first half.

So instead of backing the Raps on the first half, we'll ride their back-to-the-wall mentality over the full game. It's desperate times after all and Toronto can't afford to go down 3-0 in this series.

Don't be shocked if Barnes suits up after Nurse called him a "maybe" during today's press conference and Trent should be feeling much better after a day off.

If either (or both) of them are close to healthy, the Raps will be an underdog with teeth tonight and even without them, they could upset a 76ers team that underperforms when traveling north of the border. 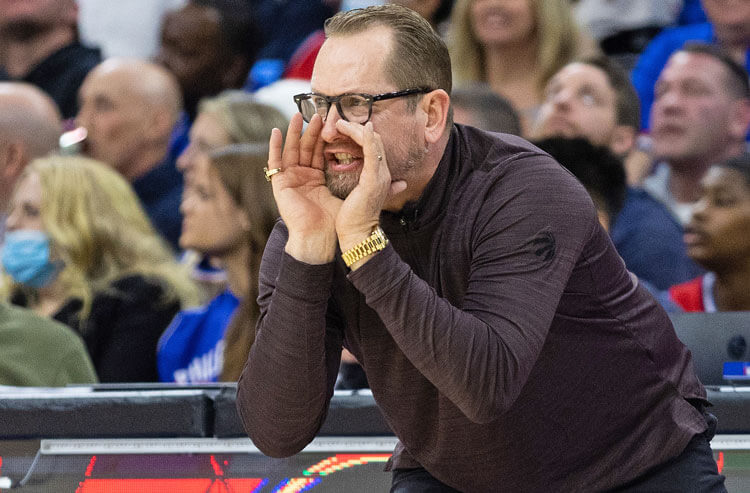