Denny Hamlin's won every seventh race this season, so when the 28th face of the calendar falls on a track he's dominated recently, we can't help but show interest in his prospects. See why our Hollywood Casino 400 picks like the favorite to show out.

After a shocking Erik Jones upset in Darlington, the NASCAR playoffs roll on as the remaining 16 drivers look to separate themselves from a tight playoff chase.

This week's Hollywood Casino 400 odds once again lean towards Joe Gibbs Racing, and one of their drivers has the type of recent Kansas pedigree that justifies his favorite status.

Check out our best free Hollywood Casino 400 picks and predictions for a full race analysis of this Sunday, September 7 NASCAR playoff event.

Picks made on 9/7/22 at 10:30 a.m. ET.
Click on each pick above to jump to the full analysis.
Odds courtesy of DraftKings Sportsbook.

The only driver to have won multiple times here in the last 10 races, he was also fourth back in the spring. Hamlin has four straight Top-6 finishes on intermediate tracks this season, and he’s also won every seventh race of the season. He won Race 7, Race 14, Race 21...Race 28? That takes place this Sunday.

He won in May 2021 and has five Top-5 finishes in his last eight Kansas starts, including a third-place run in May. Busch also has three Top-4 finishes on intermediate tracks this season.

He’s among the favorites for good reason. He led the most laps in the spring race of 2021. He finished runner-up in this past year’s spring race. Between them is a playoff win at Kansas last Fall. That’s five Top-8 finishes — four of them in the Top 4 — in his last 7 Kansas starts. On these types of tracks in 2022, Larson has six Top 10s in seven tries, including three in the Top 2.

He was seventh in last year’s spring race and won the pole for 2022’s spring race. He enters on the heels of a third-place finish at Darlington, his fourth Top-3 finish in seven races.

Harvick has eight Top-2 finishes at Kansas since 2013, including a second-place result in two of his last four starts there. He was only 15th in May, but has four Top 10s — three in the Top 4 — in the last five intermediate track starts this season.

Bowman has six Top-11 results on the 1.5-mile track in his last nine tries, including a runner-up in the spring race in 2019, eighth and fourth, respectively, in 2020, and ninth this past spring. He won on a similar track in Las Vegas back in March, too. Yes, he’s slumping on the year, which is why his odds are where they are, but these past stats give me a reason to snag him now — especially the fact that he just scored a Top 10 at Darlington.

He’s had six Top-6 finishes in his last eight Kansas starts, including fifth and second last year. But he was only 29th in May, with three of his last four starts on intermediate tracks finishing 11th or worse.

Since 2017, when he swept both Kansas races, he’s had a Top 10 in all but one start on this track. He finished sixth in the spring race. The problem is, he’s not in the playoffs and has no finish better than that sixth on intermediate tracks this season.

Elliott has struggled on intermediate tracks (1.5 miles in length or longer) this season. Larson, meanwhile, has thrived on them. He’s led the most laps in two of the last three Kansas races and won this very event last year, as well as being runner-up in the spring.

This week’s pick is like last week’s in that the race winner will more than likely come among the 16 playoff drivers. Just three non-playoff drivers have ever won a Kansas playoff race, and those all occurred from 2004 to 2007. While we had a non-playoff winner in Race 1, I don’t see it happening for two straight weeks.

Toyotas are the heavy favorites, and for good reason. Toyota has won four of the last six Kansas races, and six of the last 11.

Nine of the last 10 Kansas races have also seen a new winner as well. The only repeat winner in that span is Denny Hamlin. He’s also the only Kansas winner since 2011 to have never won a Cup championship. 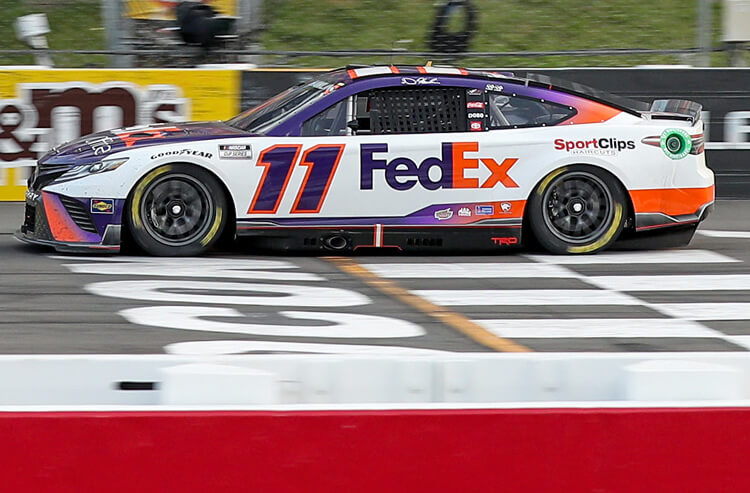