While three drivers have dominated Darlington recently, none of them are having strong seasons, possibly opening the door for a sleeper in our Goodyear 400 picks. Is Austin Dillon the one? Find out in our NASCAR betting preview.

The weathered surface of Darlington Raceway plays host to this weekend's Goodyear 400, as some of NASCAR's biggest names try to re-write history in finding Victory Lane and kick-starting disappointing seasons.

Get the NASCAR betting low-down for this weekend's stop at Darlington in our Goodyear 400 picks and predictions, with the green flag dropping at 3:30 p.m. ET on Sunday, May 8.

You can also get a complete odds breakdown in our Goodyear 400 odds.

He’s finished runner-up in his last three Darlington starts, part of four straight Top 3s and five in his last six Darlington tries in general. On the season, Larson has four Top-6 results in the last five weeks too.

He looked good in a third-place finish in last year’s Southern 500. He was also runner-up in the 2020 Xfinity Series race on Labor Day weekend. Chastain has back-to-back Top-3 results, part of three Top 5s in the last four weeks.

If you're signing up for a new sportsbook for this NASCAR season, here are two of the best bonuses* available:

A) Kyle Busch or Kurt Bursch to win BOOSTED to +700 at Caesars! Claim Now

He’s good on older-surfaced tracks — most of his wins have come on them. Fontana, Chicagoland, Dover, and Richmond come to mind. If Darlington looks like Richmond, Bowman won there last year and has six Top 10s in his last seven starts on the season as well.

Yes, he has no Top 10s in five Darlington starts, but Bell is a dirt racer by nature and can thrive with this package at Darlington now too. He also had a Top-2 car on an older surface at Richmond and you get him for 30-1 right now.

Out of his 14 career wins, he’s only gone back-to-back once. Also, he has just two Top 5s in 10 career Darlington starts.

Not a strong suit for him. His eighth-place run last May was his first and only Top-10 finish in 10 Darlington starts. His last two weeks, he’s also finished just 11th and 26th respectively.

He has three Top 8s in his last four tries at Darlington, but Logano also has only had two Top 5 finishes in his last eight there too. He hasn’t won a race outside of dirt or superspeedway tracks since Oct. 2020.

Busch has results lately (five straight Top 10s) but Chastain has been a little bit better. He’s crossed the finish line ahead of Busch in each of the last two races, part of three of the last five, in general, this season. Also, Chastain finished third the last time out in Darlington and you get him at + money in this matchup.

If you base this race on past history, then look no further than Kevin Harvick, Denny Hamlin and Martin Truex Jr. to end up in Victory Lane Sunday. Darlington is a grown-up race in the sense you have to take care of your tires. The veterans have the experience in doing so.

These three 40+-year-old drivers took three of the Top 4 finishing spots in Richmond — a track surface similar to Darlington — last month and have combined to win the last five races at Darlington, part of seven of the last nine overall.

However...Harvick has one Top-5 finish all season. Hamlin has one Top 10 all year. Truex has no finishes better than fourth in 2022.

Harvick is still +1,600, so I don’t think you punt on him necessarily, but Truex and Hamlin you have to choose carefully. Truex has won four of the last six stages in Darlington, including leading 248 laps in his win on Mother’s Day weekend last year. He led 196 laps in the 2020 Southern 500 and nearly won again that year. Truex was fourth in last year’s Southern 500 for his fourth Top 10 in his last five Darlington tries.

I just keep going back to those lack of finishes this season and think that holds more weight, so I avoided him up top.

Harvick hangs the banner for the Ford camp because Team Penske statistically always struggles here. Toyota has two wins all season and looks down in the speed department.

Does this open the door for Chevrolet now?

Kyle Larson has three straight runner-ups at Darlington, but is he ready to give Chevrolet tits first trip to victory lane on the Lady in Black since 2013? It’s 0-for-10 since. Hendrick Motorsports has all four drivers in the playoffs and can experiment now.

That then could open the door to Trackhouse Racing or RCR.

Darlington was the place that started the big break for Ross Chastain (stats above) in 2019. His teammate Daniel Suarez (third in two straight NXS starts) is good here too.

RCR may find victory lane as well. Austin Dillon (stats above) and Tyler Reddick are great at this track too and have been knocking at Victory Lane’s door all year. They have combined to score four Top 5s in the last six races on the season, with three of the last four weeks having one of them finishing second or third.

This is a different Darlington again. With this new car, you can hang it all out more which means maybe this race favors drivers with dirt racing experience. Larson (5-1), Reddick (20-1), and Dillon (30-1) have that. So does a sleeper like Christopher Bell (stats above).

The final green flag run to the checkered flag has been at least 34 laps in six of the last eight races at Darlington, with three of the eight being 86 laps or more.

Every race winner at Darlington during the stage era has scored stage points. In fact, in seven of the eight races saw the eventual race winner finish in the Top 5 in the second stage.

What’s odd about this is that the race winner at Darlington has also never won a stage either. Three of those seven races saw someone sweep both stages, but in neither event did they win the race in the end. 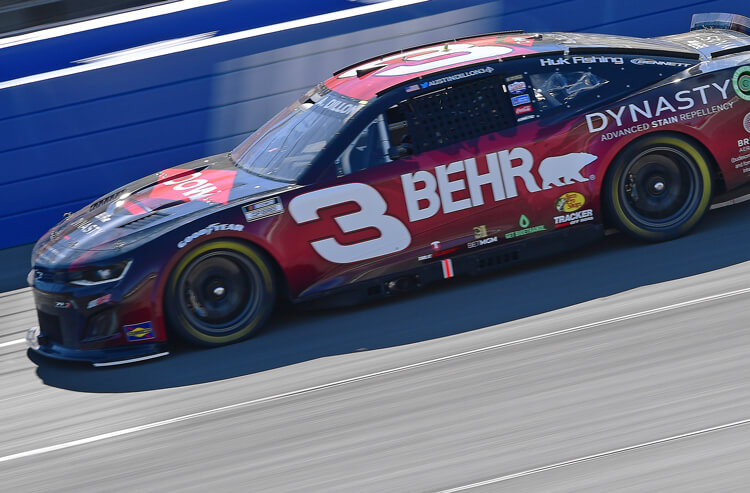