Kyle Larson has had a fairly up-and-down season so far, but with HMS' dominance in this race last year, he's seen as a heavy early favorite on the DuraMAX Drydene 400 odds board. Get a breakdown of the top contenders for this weekend's NASCAR race.

NASCAR betting odds are out for the DuraMAX Drydene 400, which takes place Sunday, May 1 at Dover International Speedway.

Hendrick Motorsports laid waste to last year's field, and is likewise carrying the best odds heading into this weekend's race, in what's been a fairly wild NASCAR season thus far.

We bring you the NASCAR odds to win the DuraMAX Drydene 400, with the green flag dropping at 3:00 p.m. ET.

Larson led last year's Drydene 400 for the most laps, ultimately finishing second. The defending Cup Series champion has had a very up-and-down 2022 thus far, finishing 19th or worse in five of this season's 10 races, and Top 5 in the other five, including a win in the Wise Power 400.

Larson's Hendrick Motorsports team swept the Top 4 in this race last year, and represents all of the Top 4 on this year's pre-race odds board.

With two wins among four Top 5s on the young campaign, Byron's looking like a new Cup Series contender, and had a fourth-place finish in this race last year, bolstering his prospects for continued success this weekend.

Elliott's been consistent if unspectacular so far this season. While he leads the overall points standings, he also has just one Top 5 despite seven Top-10 finishes. Elliott's one of the circuit's most prolific drivers and will find his way into contention eventually, finishing third in this race last year.

Bringing up the rear of the HMS quartet is Bowman, despite being the reigning Drydene champ. Bowman also has a win this season in Vegas, along with a runner-up at COTA, currently sitting fifth overall in the Cup Series standings. 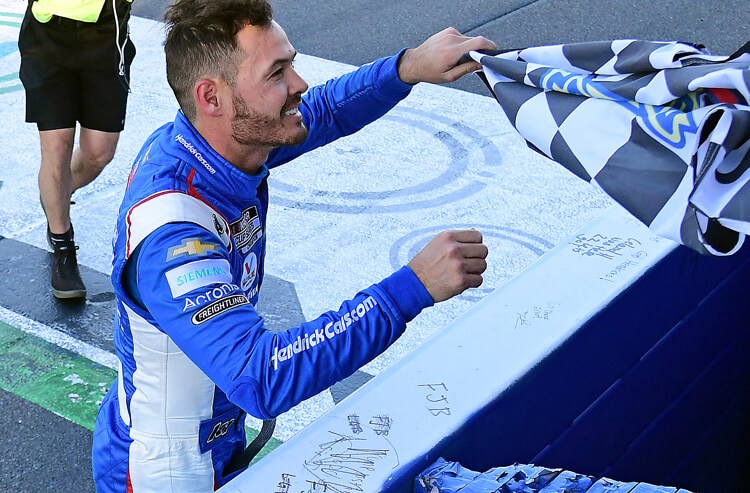