Christopher Bell has gotten used to Victory Lane in these playoffs, and is riding the kind of momentum that could carry him all the way to the Cup Series Championship. See why he headlines our NASCAR picks for the season finale.

No more dress rehearsals. It's time for the show — NASCAR's Cup series Championship at Phoenix Raceway.

The Cup Series Championship odds are tightly-packed among the Championship 4, each with a plausible claim to victory this weekend. We're here to help you navigate your last chance to bet on NASCAR for the next few months, with the trends and angles that matter.

He was ninth in both races last year, won Loudon, and was sixth and second, respectively, at Richmond, too. He’s also won the last two elimination races of the playoffs, so he’s battle-tested and entering on the heels of a win.

Elliott enters Phoenix having won the fall race in 2020, was fifth in both races a year ago, and has six Top 7s in his last 10 on this track. If not for pit road, he had a Top-5 car in the spring race after finishing third and second in both stages. At Richmond, Elliott took 14th and fifth, respectively, while also coming home runner-up at Loudon. The only drawback is that he’s had just two Top-10 finishes over the last 11 races this season.

Logano didn’t use to be among the ones to beat at Phoenix, but over his last six starts, he has five Top-10 finishes including a win in the 2020 spring race, and third in that year’s playoff race. He was also runner-up in the 2021 spring race, in which he led the most laps (143) too. However, on like tracks this season, Logano was 17th and sixth at Richmond and 28th at Loudon. The thing is, he’s had the most time to massage his car to the best of its ability in winning the Round of 8 opener. He did so in 2018 and took home the title that year.

Runner-up in the spring race, but only 19th and 18th in Richmond and eighth in Loudon make me leery. However, he’s in the Championship 4 and has six Top-7 finishes in the last eight weeks, including his last three finishes being second, second, and fourth, respectively.

This didn’t use to be one of his better tracks. Now it’s become one. Larson has three Top 5’s in his last five there, including being seventh and first respectively in 2021. He was however 34th this past spring after an engine went down, though he was seventh and fifth in the stages. On like tracks this season, Larson was fifth and 14th at Richmond, as well as 14th at Loudon. He’s also fighting for a championship on the owners’ side and enters with finishes of first and second the last two weeks.

The Joe Gibbs Racing driver has 10 Top-10 finishes in his last 13 starts in the desert, including five Top-5 finishes in his last seven. At Richmond, he was first and fourth respectively while finishing sixth at Loudon. He led 203 laps a week ago in Martinsville, and if not for his pit crew, a win was likely.

He was second and 10th in his last two fall race starts here, and fourth in the spring of 2021. Roush used to be really good at Phoenix. Can Keselowski put them back on top?

He won Bristol, was third last time out in Richmond, and had a Top-10 here in the spring.

One of the top Penske drivers at this track. Blaney, has six Top 10’s in his last seven at Phoenix, including a pair of third-place runs in 2019, 10th and sixth in 2020, 10th (35 laps led) and fourth last year, then fourth again this past spring. He led 143 laps and won Stage 2 but pit road on his final stop kept him from victory lane.

He was seventh and 10th at Richmond this year and only 18th at Loudon, though. Blaney was third last week in Martinsville, however, he’s winless in his last 45 starts including 0-for-35 this season. Do you think he magically wins on Sunday?

The proverbial “king of the desert” has been astounding in Phoenix. Since 2012, Harvick has seven wins alone to go along with 11 Top-2 finishes (21 tries). Furthermore, Harvick has finished worse than seventh in just three of those 21 starts. He was sixth in the spring race but restarted third in the end. He just didn't have the launch to contend for the win and got eaten alive.

He was second and first, respectively, at Richmond and finished fifth at Loudon, too. Now he can attempt to become just the sixth driver to win 10 or more races at a single track with a win this weekend.

In saying that, he hasn’t won with this new configuration, going 0-for-7.

This change has been his kryptonite, you could say. Seven of his last eight Phoenix results have seen him finish fifth or worse. 10 of his previous 13 on the old configuration saw him finish fourth or better.

He finally won at Phoenix in the 2021 spring race and was runner-up last fall. It was a huge load off of his shoulders because, quite frankly, until he joined Joe Gibbs Racing, he never was much of a threat there.

Here we are — the final race of the season. Which trend do you think wins out here? The favorites are all Championship 4 drivers, and with good reason. However, some sleepers are getting really good odds. Which side are you on?

Bell has won the last two elimination races, and with this being a winner-take-all between these four, he has to be one of the ones to beat. He may have been 26th in the spring race, but was ninth in both races last year, was sixth and second in the two Richmond races this year, and won Loudon this season as well. Richmond and Loudon are the two most comparable tracks to Phoenix.

Chastain, meanwhile, has three straight Top-4 finishes on the season, and was runner-up here in the spring. However, he was only eighth in Loudon and 19th and 18th in Richmond this year.

The problem is, neither are really supposed to be here and neither has won a championship. The other two are past champions, but each is backing their way into this race.

Elliott has just two Top-10 finishes in his last 10 races, while Logano has been 17th or worse in five of the last eight.

Does that open the door up for a sleeper then? The problem there is, Ryan Blaney and Martin Truex Jr. are both good here, but are winless all year. Kevin Harvick is also great on this track, but is 0-for-7 since this new configuration.

While that could sway you back to the four favorites, you also have more parity this year.

The first four races of this year’s postseason were each won by non-championship-eligible drivers. That’s never been done before. The reason for that was that the drivers felt like there was no more holding back their best stuff for this year’s playoffs. You have what you have.

So, does that mean this is the year we see some better racing for the win up front among non-championship contenders?

It’s not unprecedented. Prior to this format, the champion only won the final race once in the previous 10 years of the playoff format (Tony Stewart, 2011). In fact, if you go back to the start of the Modern Era (1972) and go through the 2003 season on the traditional points format, the season champion won the season finale just twice in 42 years: Jeff Gordon (1998 in Atlanta) and Tony Stewart (2011 in Homestead). They’re 8-for-8 since. 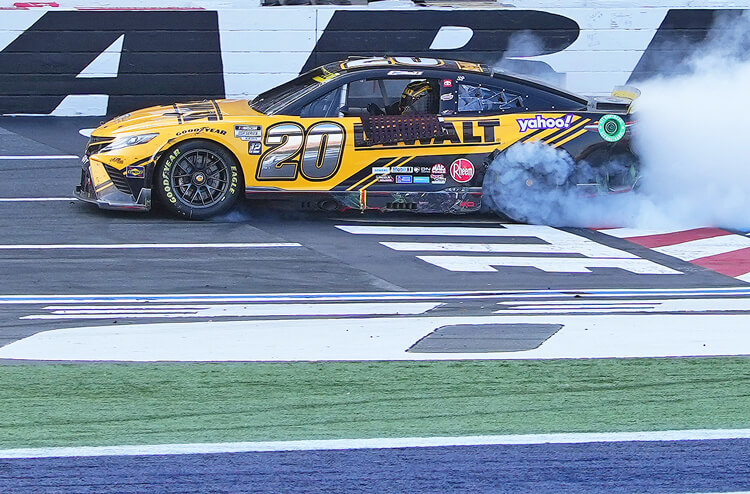