Chase Elliott is back in pole position in the NASCAR playoff standings and rolls into Charlotte as the favorite on the heels of last weekend's victory. See why we're with the NASCAR odds, as he's among our Bank of America ROVAL 400 picks.

Chase Elliott rocketed back to the top of the NASCAR playoff standings with his win last weekend, and is favored yet again, as the circuit's best road driver looks to take another Victory Lane run at Charlotte.

Elliott tops the Bank of America ROVAL 400 odds board — as he typically does heading into a road course race — and he's among our picks for this weekend as he looks to put more distance between himself and the rest of the playoff field.

As the Round of 12 concludes, check out our best free Bank of America ROVAL 400 picks and predictions for Sunday, October 9.

Picks made on 10/5/22 at 11:15 a.m. ET.
Click on each pick above to jump to the full analysis.
Odds courtesy of DraftKings Sportsbook.

He’s won two of the last three ROVAL races, and was sixth in the prior one. Elliott also was fourth at COTA, eighth in Sonoma, second at Road America, and fourth at Watkins Glen after leading the final restart.

He was runner-up a year ago here and has a pair of road wins (Road America, Indy) to go along with being fifth (COTA) and seventh (Watkins Glen) this season.

He won Indy last year, was in the Top 3 on the final lap in COTA, was in the Top 10 late in the race at Sonoma, finished ninth in Road America, seventh at Indy again in July, and runner-up at Watkins Glen. He’s also won the Xfinity Series race here in three straight years.

They’ve won two of the five road course races and enter with some momentum.

Daniel Suarez (+1,500) won Sonoma, led every lap of the first stage at COTA, was fifth at Road America, lined up fifth on the final restart in Indy, and finished fifth at Watkins Glen.

Ross Chastain (+2,000) was first at COTA this year, seventh in Sonoma, and fourth at Road America. He crossed the finish line second at Indy before his penalty was levied and only 21st in Watkins Glen. I still like him on these tracks.

They may be winless on road courses this season, but their drivers have been stout and have good odds for the taking, with each being +1,500.

Ryan Blaney is a previous winner here and has finished eighth, fifth, and ninth, respectively, since. Blaney also has a pair of sixth-place finishes on road courses this season.

Joey Logano has had a Top 10 in all four ROVAL starts, including a runner-up in 2020. He was sixth in Indy and third at Watkins Glen too. Austin Cindric has finished eighth, fifth, seventh, second, and 13th on five road courses in 2022. Also, worth a look.

A road racer by nature, he has four Top 10s on them this season, including a third at Sonoma and sixth the last time out at Watkins Glen. He also has five Top-11 finishes in the last seven weeks, including a Top 5 last weekend in Talladega.

That’s why I’m punting on them despite some up-and-down success on the ROVAL.

Bell won the Daytona ROVAL a year ago, and was eighth on the Charlotte ROVAL. Truex Jr. should have won the inaugural race here, was 7th in the two races after that, but 29th a year ago. Busch was 32nd, 37th, 30th, and fourth here while Hamlin was 12th, 19th, 15th, and fifth.

He was sixth, sixth, and 11th in his last three ROVAL starts. The thing is that he hasn’t had a Top 5 in any of the five road course races this season, with a best result of ninth. So, while he can be solid, no Top 5s here and no Top 5s on road courses in general in 2022 leave him on a fade list.

Don’t get me wrong here, I do think Reddick is going to be a factor in Sunday’s race. However, the ROVAL has never been won by a non-playoff driver and Larson is still in the fight for a title while Reddick isn’t. Also, Larson won the last race here and last road course race on the season, and you get him in a matchup with plus money. Take it.

We finally saw a playoff driver win last Sunday in Talladega, and now head to Charlotte, where only three non-playoff drivers have ever won the sixth postseason race, none of whom since this playoff format started in 2014. The three times that it occurred also weren’t on the Charlotte ROVAL, either.

That means you can really break it down to the Top 12 in points right now.

Among them, narrow it down to Chevrolet drivers who have won all the road courses this year, and are looking to end the season 6-for-6 on twistys. They’re riding a streak of 11 straight road course wins at that.

The value is on Trackhouse Racing for better sleeper odds, but you can’t discredit Hendrick Motorsports’ duo of Larson and Elliott. I also like Reddick, who, combined with Trackhouse, have taken four of the five road course wins.

The Fords are some good longer shots too, with Team Penske leading the sleeper category and Chris Buescher and Michael McDowell of some longer shots worth risking.

Outside of these picks, there’s not much more I’d waste money on because trends are clear in this one, which is why outside of Denny Hamlin, Vegas got these odds right. 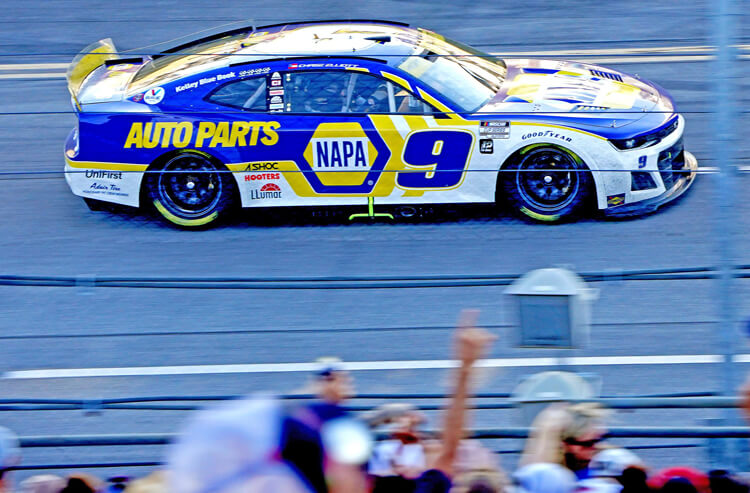