NASCAR hits a road course as the playoff field gets slimmed yet again. As the drivers rev up for this weekend, get the best racing betting insights with our Bank of America Roval 400 picks.

NASCAR drivers are about to be thrown out of the loop again, as the circuit rolls into Charlotte Motor Speedway's ROVAL course.

This weekend, the playoff field will be trimmed from 12 to eight, and one of the drivers on the elimination bubble has dominated this track of late.

We're here to help you steer your NASCAR betting with Covers Experts' Auto Racing Advisor preview and picks for the 2021 Bank of America Roval 400, which gets underway at 3:00 p.m. ET on Sunday, October 10.

Definitely the favorite. He won in Sonoma and Watkins Glen, should have won in COTA but finished second with the rain ending the race early, should have had a Top 3 in Road America, and was third in Indy in what should have been a win with the fastest car.

He’s won the last two ROVAL races, was sixth in the prior one and has four Top-2 finishes in his last five road course starts on the season.

He should have won the inaugural race and was seventh in the two races since. This season, he has three Top 10s in his last four road course starts.

He’s had a Top 10 in all three ROVAL starts, including a runner-up last year. Logano also has three Top-4 finishes in six road course starts this season.

He was sixth in his last two ROVAL starts, sixth in Watkins Glen and had a Top-6-or-7 car at Indy before that fluke crash at the end.

Elliott may have won the last two races here, but you’re getting plus-money on the best driver with the fastest car this season. Larson beat Elliott in Sonoma and Watkins Glen as well as being ahead of him for most of the day on the Indy road course.

He’s not been his best on road courses including the ROVAL. He was fifth in 2019 but his other two results are 31st and 18th, respectively. On the season, Keselowski was fifth on the Daytona ROVAL but 19th, 15th, 13th, 35 and 24th everywhere else.

While he was ninth in 2018 and third in 2019, Harvick has no Top-5 finishes in six road course appearances in 2021, including three of his last five results being 22nd or worse.

The final race of the Round of 12 is here. 1 driver (Denny Hamlin) already knows that he’ll be in the third round of the Cup Series playoffs via his win two weeks ago at Las Vegas. 11 more drivers will fight for six spots. Four go home, with three likely facing must-wins.

Five of the last seven years have seen someone new bump their way back in on the final race of the second round. Despite that, the largest margin someone made up without winning was 19 points. So, for someone new to make it back in, it would have to be historic. Kevin Harvick is the only one that can via those trends, as he’s -9. Christopher Bell (-28), William Byron (-44) and Alex Bowman (-52) are also on the outside looking in.

But, it can be done. With this being a wildcard event, does that open up a chance for another surprise winner?

Trends say no. Chase Elliott has won the last two years here and has to enter as the one to beat because of that.

In the three years this race has occurred, the winner finished in the Top 2 in all three second stages. Ryan Blaney won the second stage in 2018, Elliott won it in 2019, and he was second in 2020. 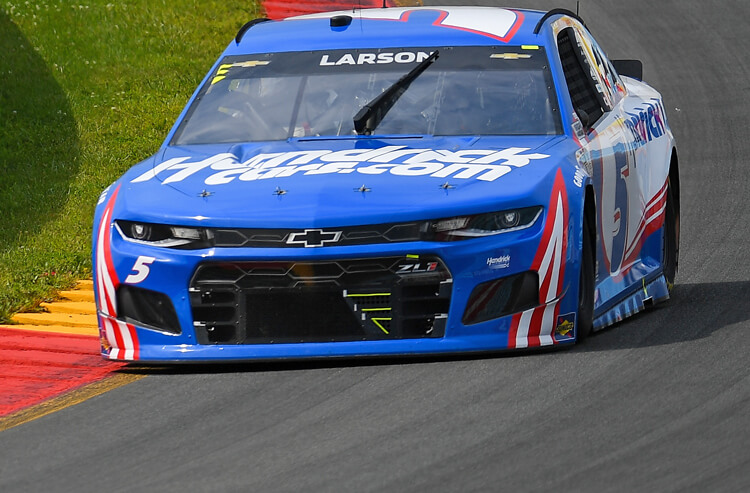