Both Toronto FC and Atlanta United are bleeding goals like it's good business. Their malaise does serve us up good business, however, in the form of some favorable wagers —including Luiz Araujo to continue streaking — in our MLS betting picks.

Two teams in the midst of disappointing campaigns will take the pitch on Saturday afternoon, when Toronto FC plays host to Atlanta United in MLS action.

The visitors will be in search of only their second away victory of the season, having won just three of their last 12 road trips. Meanwhile, Toronto hopes to end a club-record 23-match run without a clean sheet, and avoid tying an MLS record in the process.

With Josef Martinez back and firing in goals, Atlanta will hope to secure a second straight league win. Let’s take a look at how the match will play out in our Toronto FC vs Atlanta United picks and predictions for Saturday, June 25.

The forecast for Saturday afternoon in Toronto calls for absolutely perfect conditions, with temperatures in the low 70s and plenty of sunshine. There is zero chance of rain, and winds are not expected to be of concern.

Looking at the table, Toronto is the third-worst team in the East, but their defense is by far at the bottom of the conference. Their 29 goals conceded so far this season are the second-most of any team in MLS, and their minus-17.7 expected goal differential is a mark that is twice as large of a gap as the next-worst side.

Bob Bradley’s youth movement has simply not gone as planned, while injuries have made things even more difficult. To make matters worse, striker Jesus Jimenez has seen the goals dry up at the offensive end, in the midst of a six-match run without scoring after bagging seven over their first nine outings, putting just 14 shots on goal this campaign.

Atlanta has won just three times in their 12 away matches under manager Gonzalo Pineda, with only one of those coming in 2022. They’ve taken just two victories total in their last nine matches, after going 3-1-1 to open the campaign. Their 2-0 win over Inter Miami last weekend ended a three-match winless run, with Josef Martinez scoring one and assisting the other. He has played in just seven club matches this season, but has three goals and three assists, as his side have lost just once twice with him in the lineup.

Only three times this season have the Five Stripes kept a clean sheet, as they deal with the large absence of both Miles Robinson and Brad Guzan at the back. They’re two of three different players for Atlanta to suffer torn Achilles injuries this season, and their leadership has been sorely missed away from home, as they’ve lost four of their six road trips.

This match is a difficult one to predict a winner in, quite frankly, because it’s so tough to trust either side. Atlanta’s inability to perform on the road under Pineda is quite concerning, and even against a defense as leaky as Toronto’s you wonder if they will be able to get the job done. On the other side, the Canadian outfit has performed quite well at home, but they can’t keep a clean sheet and haven’t shown any real consistency at the offensive end.

Usually, in a situation like this, I typically lean towards a draw. However, I believe Toronto has a real chance to win outright. Atlanta got their draw against Nashville last time out on the road with an 88th-minute equalizer, and their sole away win came on a 93rd-minute goal at DC United earlier this season. It’s a tad bit juicy, but take Toronto to win or draw with a double-chance play.

Toronto has done very well defensively at home this season — well, at least during the first half-hour. Through seven home matches, they’ve conceded just twice in the opening 30 minutes. Unfortunately for them, the first half is 45 minutes long, and they’ve conceded four goals between the 31st and 45th minute at home this season. On the flip side, they’ve scored four goals in that same period of time.

Atlanta has only scored twice in the opening 45 minutes in their six road matches this season, but Martinez was missing in four of those outings. In their last away match at Nashville, they found the back of the net before halftime while conceding twice, pushing their first-half goals conceded tally to six.

With how leaky both defenses are before halftime this season, getting such a good price at multiple goals in the opening frame provides the best total play in a match where there isn’t a whole lot of value in the totals market.

Atlanta and Toronto squared off three times during the 2021 season, with the Five Stripes taking a pair of victories and drawing 1-1 in their final Toronto FC match of the campaign. In each of the last two meetings, attacker Luiz Araujo found the back of the net.

Despite a three-week international break between them, Araujo has been Man of the Match in each of Atlanta’s previous two contests, and last week against Inter Miami, he matched Martinez with a goal and assist in the contest. With Martinez back and getting much of Toronto’s attention, this is a prime opportunity to make it three straight with a tally against the Toronto FC side. 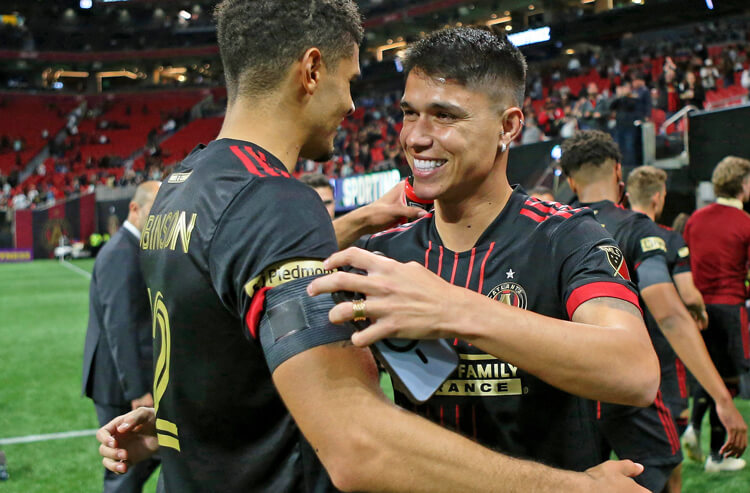