Two high-pressure squads face off under the glaring L.A. heat Sunday, and while the Red Bulls can run, they also tend to burn out late, which is why we like LAFC to outpace them over the stretch of the match. Find out how with our MLS betting picks.

Two of the top teams in the league will do battle on Sunday afternoon, with LAFC playing host to New York Red Bulls in the marquee game of the MLS weekend slate. Leading MLS with 30 points, LAFC hopes to continue their two points per match pace, while the Red Bulls look to score an away goal for the first time in three matches.

After winning an MLS-record tying five straight away trips to start the season, New York has gone three straight without victory, but to achieve one would mean being just the second side to defeat LAFC at Banc of California Stadium in nine tries this year. Let’s see what their chances are of pulling off that feat in our LAFC vs New York Red Bulls picks and predictions for Sunday, June 26.

The weather could be a factor on Sunday, with temperatures in the low 90s when the match kicks off at noon and steadily increasing throughout the contest. Air quality will be a real concern, along with the heat advisory that is in effect all day. Winds should not play a factor, nor is there any chance of rain.

There are quite a few storylines swirling around this matchup, none bigger than the status of Carlos Vela. Scorer of 73 career goals for the club, the 2019 MLS MVP came off the bench last weekend in their 1-1 draw at Seattle to make his 100th appearance. However, this weekend could very well be his last in an LAFC uniform, as he’s yet to agree to an extension with the club. Out of contract on July 1, Vela has stated he would be open to a move this summer, a result that would deal a massive blow to the side’s title hopes.

Those title hopes are predicated on an offense that creates chances and puts pressure on defenses. 13 different players have scored for the side, with their 30 goals leading MLS. Vela has six of those, one of five different players to have at least three this season, and he’s already topped his goal-scoring output of a season ago. The team ranks fourth in the league with 22.8 shot-creating actions per 90 minutes, and only two sides have created more shots off dribbles.

Speaking of stars, New York has one in midfielder Luquinhas, who scored the MLS Goal of the Week in a 2-0 win over Toronto last weekend with a phenomenal chip from outside the box. He and Lewis Morgan have now combined to score seven goals in the side’s last four matches, including their 3-0 midweek victory over rivals NYCFC in the US Open Cup. They now travel all the way across the country after a physical match on Wednesday that saw three players sent off.

No team presses more than the Red Bulls, but they sometimes run themselves into the ground. 12 of their 17 goals conceded this season have come after halftime, with six of those coming during the final quarter of an hour. Despite having nearly 25% more pressures than any other team in the league, they rank just fourth in success rate. Many of their attempts come in the middle third of the pitch, as they’re happy to concede possession and try to hit on the counter.

LAFC lead the league with nine forced errors leading to shots, as they like to press as well — albeit more judiciously than the visitors. They’ve also been a terrorizing force to defenses at home, scoring multiple goals in six of their eight fixtures at Banc of California Stadium, winning five of those outings. Only Austin has walked out with all three points this season.

I don’t expect the Red Bulls to get shut out again on the road, but I’m not sure it will matter much at the end of the day. LAFC are simply too good in attack, and they rank sixth in the league in possession. New York’s pressure may get the ball from them, but the Red Bulls are the worst team in the league against pressure themselves, with a 35.2% rate of successful pressure from their opponents leading the league. LAFC’s relentless attack, combined with the travel and the weather conditions, will see the visitors once again fall apart down the stretch.

In their away matches this season, the Red Bulls have scored eight goals after the break versus just six before it. They’ve also conceded just four in the opening 45, but as we stated earlier, they tend to fall apart down the stretch. LAFC have scored a league-leading six home goals in the final quarter of an hour this season, and I like them to do it again as New York’s legs get tired. Look for at least two goals in this one after halftime.

One of my favorite aspects of sports betting is finding bets with truly long odds that have a better-than-usual shot at hitting. LAFC are rightly favored in this match, and it would be easy to say “take them to win” and move on. However, I want to win money — and help you win money — and few things achieve that more than hitting a longshot play.

While the Red Bulls haven’t scored in their last two away matches, they’re a dangerous side in attack and love to strike first–as they did against Toronto, scoring a corner two minutes in. That’s perfectly fine as far as LAFC are concerned, having taken a league-leading 12 points from fixtures where they’ve trailed 1-0. Look for them to do so again this weekend and rake in a big payday from it. 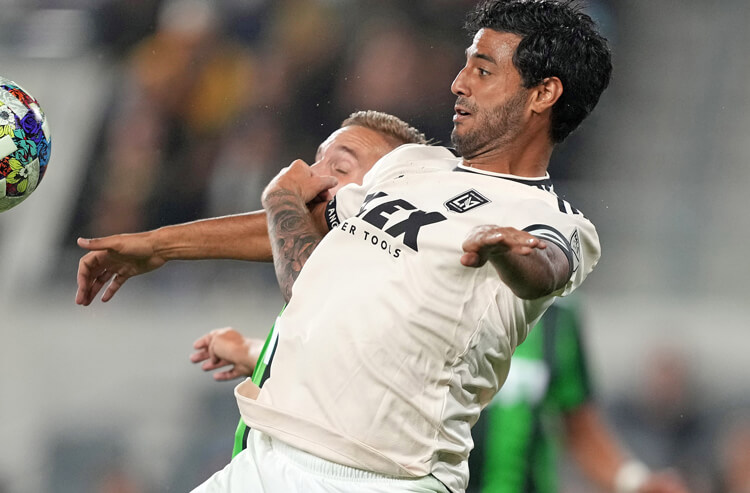 LAFC vs New York Red Bulls Picks and Predictions: LAFC Shine in Second Half
Provided by