L.A. shored up their porous defense from a year ago, but now scoring goals appears to be the problem. That's bad news against an Austin side that's peppering the net, and we're backing them to take advantage in this matchup with our MLS betting picks.

After defeating their cross-town rivals mid-week in the US Open Cup, the LA Galaxy turn their attention back to league play, seeking to end a three-match winless run. They welcome Austin FC to town on Sunday afternoon, owners of the top goal-scoring tally in MLS, as the two clubs square off for just the fourth time.

Sitting second in the Western Conference, Austin is putting together an impressive second season in the league and are seeking revenge for a 1-0 defeat to the Galaxy just a few weeks ago. Meanwhile, Los Angeles are hoping that Chicharito and Douglas Costa will shake off the rust and begin to provide some goals. Here are our LA Galaxy vs Austin FC picks and predictions for Sunday, May 29.

The weather in LA on Sunday afternoon will be picture-perfect, with temperatures in the upper 70s and plenty of sunshine. There is no chance of rain in the forecast, with a light breeze expected.

The Galaxy front office focused on improving a shaky defense from a season ago, and through the first 10 matches those efforts paid dividends. They allowed just seven goals in that span, taking 19 points from a possible 30 with wins over Nashville, LAFC, and NYCFC. Their last three matches have seen that all come to a screeching halt, as both FC Dallas and Houston Dynamo walked into their building and left with both a trio of goals and three points.

Sandwiching a 1-1 draw at Minnesota United, those two thorough defeats also displayed the Galaxy’s offensive struggles. They’ve scored just two goals while conceding seven in that three-match run, and their 13 goals scored this season is the third-lowest tally in the league. They're underperforming their expected goals mark by some distance, averaging 1.56 xG so far this season. Yet, despite their 178 shots being the sixth-most in MLS, only three teams have put a lower percentage of shots on goal than the Galaxy, with just 52 testing the keeper.

Scoring goals is not an issue that Austin can relate to. They’re pacing MLS with 27 goals this season, while Sebastian Driussi is putting together a strong case for an MVP award with eight goals and three assists. His 12 goal involvements lead the league, and his penalty against Orlando City last weekend opened their scoring. He was named to the MLS Team of the Week after a performance that also saw him complete 43 of 47 pass attempts, as they somehow salvaged a draw against a nine-man Orlando side with an equalizing goal late in stoppage time.

While many (myself included) wrote off their early-season success as a product of their schedule, Austin’s 2-1 victory at LAFC two weeks ago opened quite a few eyes. Their plus-13 goal differential is just one off NYCFC for best in the league, and they’ve outperformed their 1.34 xG per match by some margin. They now sit fourth-best odds to win MLS Cup, and their 10 points from a possible 18 on the road this season is one of the better marks in the league.

Dignity Health Sports Park has been anything but a fortress for the Galaxy this season, as they’ve taken just nine of a possible 18 points at home — the second-lowest points per match ratio in the West. Now they must try to figure out their defensive issues while coming off an emotionally and physically draining El Trafico match on Wednesday night, against the hottest-scoring team in the league.

Austin have taken victory in three of their last four matches away from home, including wins over LAFC and the very Houston side that thumped the Galaxy last weekend. With a full week of rest and revenge on their mind, I’ll take a strong offensive side against a struggling defensive unit any day of the week. Austin’s defensive inconsistencies give me pause to take them outright, but the double chance at nearly even money is a very safe play in this one.

Although he scored mid-week in the USOC match against LAFC, Chicharito has now gone seven matches in league play without a goal despite averaging nearly three attempts per match. Winger Douglas Costa ended an eight-match scoreless streak of his own with a goal in the defeat to Houston last weekend, while the duo of Efrain Alvarez and Kevin Cabral have a total of one goal between them.

The Galaxy have been held scoreless in two of their six matches at home this season, while scoring multiple goals just once. That multi-goal performance came against LAFC, with El Trafico seemingly being the only time their offense can wake up this season.

While Austin haven’t been the best defensive side in the league, goalkeeper Brad Stuver is back from his knee injury and only a late penalty kept him from a clean sheet against LAFC. They’ve not conceded more than twice on the road all season, while the Galaxy have managed multiple goals just three times in 2022, despite having the third-most penalty area touches in the entire league. I love a single goal or less for LA’s team total on Sunday and will happily take it at plus odds.

Only two teams have a better first-half record than Austin this season, who have outscored their opponents 11-7 prior to the intermission. The Galaxy, on the other hand, have been ahead at halftime just once in their six home matches, and have trailed in three of them. Given their poor defensive form of late, and how drained they will be from El Clasico, I’ll take Austin to be leading at halftime, if not winning outright. 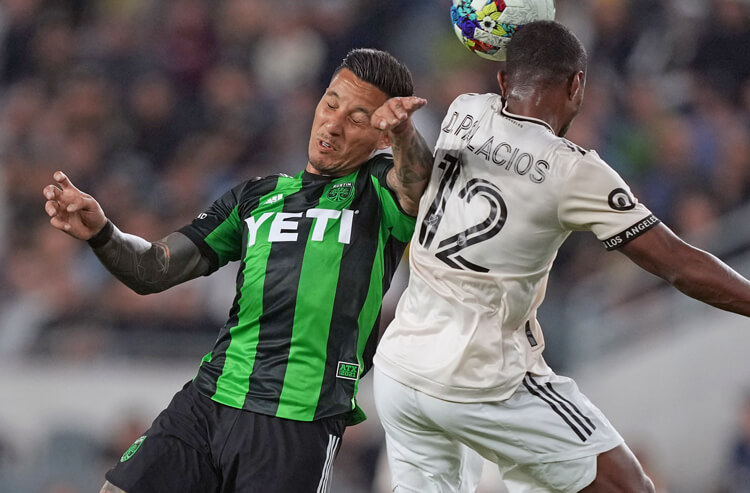