FC Cincinnati vs Toronto FC Picks and Predictions: Running it Back

In MLS betting action on Saturday, we saw FC Cincinnati make the trip north to face Toronto FC, leaving with all three points. The two Eastern Conference foes will play the rematch in Ohio Wednesday, and our picks expect little change.

No, don’t adjust your monitor. Your glasses or contacts haven’t suddenly changed prescription. If it feels like you just watched this match… well, you did. Saturday saw FC Cincinnati travel to Toronto and claim all three points on the road, despite having eight players missing and having gone four straight without a victory.

Now, both teams head to Cincinnati for the reverse fixture, with Toronto FC hoping to figure out a solution to their putrid defense and the home side looking for just its third-ever win at TQL Stadium. Here are our picks for FC Cincinnati vs. Toronto FC for Wednesday, May 4.

The conditions on Wednesday evening will be cloudy, but they will also be dry. Temperatures will be in the low 60s at kickoff, with little to no wind anticipated.

There seem to be no answers in sight for Bob Bradley’s team right now, as Toronto was a mess in the first half of its 2-1 defeat. Starting out in a 3-4-2-1 formation, Bradley’s men were unable to generate any sort of meaningful possession, before an injury just inside a half-hour forced TFC to convert to a four-man back line. Even then, they were very conservative in the opening stanza, to no success. Their defense was incohesive, the midfield made far too many sloppy passes, and any attempt to play the ball down the pitch went nowhere. That shouldn’t surprise anybody though, given they are completing fewer than one-third of their long passes this season, second-worst in MLS.

Toronto FC’s timidness and inability to put any sort of pressure on the visitors allowed Cincinnati to gain confidence as time went on, and it manifested itself into a goal late in the first half, when a corner routine saw Nick Hagglund head the cross down to Ian Murphy, who was unmarked at the penalty spot and did not waste his chance as he easily finished to put the visitors ahead heading into halftime.

Seven minutes after the break, playmaker Luciano Acosta was the beneficiary of poor defending, as a long throw-in to the box landed at his feet, and he was able to turn and finish past the keeper.

Toronto finally started throwing numbers forward, laying siege to Cincinnati’s area. With reinforcements for the visitors waiting to enter, Toronto finally got on the board with Jesus Jimenez scoring a side-volley off a headed cross, giving the forward his league-leading seventh goal of the campaign. Bradley threw on every forward he could, including the return of Ayo Akinola after being out nine months with a knee injury, but it was not enough as Cincinnati was able to waste time and defend for its lives until the final whistle.

Toronto is void of any on-the-pitch leadership, and its defense repeatedly allowed Cincinnati to get behind it in the first half. Despite all that, it could easily have escaped on Saturday with a draw because Cincinnati’s finishing woes continued to rear their ugly head. In fact, it had a two-on-goal break in second-half stoppage time and were still unable to put the match away. Had Toronto opened the match playing the way it did in the final 30 minutes, one could argue it would have taken all three points.

Personally, I will be staying away from betting the result on this match, as Toronto’s urgency in the second half showed that it can put serious pressure on Cincinnati’s defense. I also simply don’t trust Cincinnati to win at home, something it has done just twice in 21 league matches at TQL Stadium. While I do believe that FC Cincinnati will overcome their past and hang on to secure the win, if I had to play anything result-related, I would wager that Cincinnati scores first yet again and leads at the interval.

Toronto has conceded a goal in the first half of each of its last four matches and in three of its four road fixtures thus far in 2022. New York Red Bulls put four past them before the break earlier this season and Real Salt Lake got on the scoresheet twice in the first 45 in their fixture as well.

As for Cincinnati, it has now scored first in its last two matches and has recorded a first-half tally in five of its last seven matches. It has also scored a total of five first-half goals in its last three matches at TQL Stadium. I see no reason why either trend won’t continue against the worst defense in the league.

As the saying goes, “If it ain’t broke, don’t fix it.” My best bet in the preview for Saturday’s match was for both teams to score and at least three goals to be scored,and if you played it, then you won with 25 minutes to spare. In a match that saw Cincinnati miss multiple chances and saw Toronto lay siege to its opponent’s penalty area for much of the latter stages of the match, the only surprise was that more than three weren’t scored.

Toronto is in a tough situation here. If it pushes forward like it did in the second half, it will leave itself exposed to a Cincinnati attack that tore it to bits at times on Saturday. If TFC play slowly and methodically again, it just allows the home side to stay composed and hit them on the break.

I don’t trust that TFC can do either well, nor do I trust Cincinnati to keep a clean sheet at any point. While I could be convinced of nearly any result at full time, I cannot be convinced that either defense plays markedly better than they did in the first meeting. Ride the trend of this bet now cashing in five of Cincinnati’s last seven matches, and in each of Toronto’s last eight. 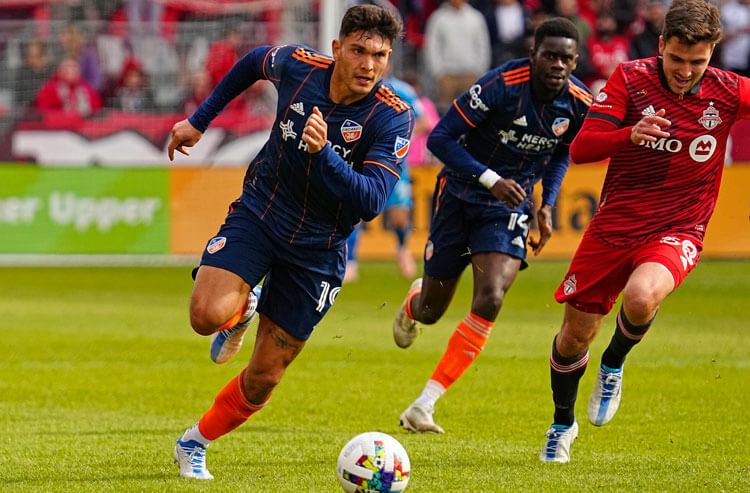 FC Cincinnati vs Toronto FC Picks and Predictions: Running it Back
Provided by