The Astros are scoring runs and doing so by making a lot of hard contact. Facing a White Sox starter that has a high BABIP, Houston is not just a good MLB betting pick today but our predictions also like the Over at plus money.

Two of the American League's strongest — and hottest — teams link up on Thursday when the Houston Astros host the Chicago White Sox for the first of a four-game weekend set.

Chicago is leading the AL Central at 43-25, but goes into this game as a slight MLB betting underdog against the Astros, who at 39-28 sit second in the AL West.

Here are our best free MLB picks and predictions for White Sox vs. Astros on Thursday, June 17, with first pitch set for 8:10 p.m. ET.

TwinSpires Sportsbook opened Houston at -130, peeled back a few cents to -124, then rose to -137, where the moneyline stands at 5:15 p.m. ET. The Astros are attracting 70 percent of tickets and 76 percent of money. The total is stable at 9, with ticket count and money in the 2/1 range on the Over.

Dylan Cease (5-2, 3.38 ERA): The young righty has seen his numbers improve every season, with his ERA, WHIP (1.28) and K/9 (11.5) in his third MLB campaign all easily career-best marks. Cease has actually been a bit unlucky, sporting a .311 BABIP that is well above the MLB average, but his near-even ground ball to flyball ratio and low (34.5%) hard-hit percentage help offset that. He's logged at least seven strikeouts in three of his last four outings and is coming off a five-inning, two-run effort against Detroit.

Jose Urquidy (4-3, 3.77 ERA): Also in his third season, Urquidy continues to impress, coming off a seven-inning, three-run, eight-strikeout performance in Minnesota, which was a nice bounce back from a rough road start against Toronto. The 26-year-old righty has really improved his command, as after giving up eight walks in 29 2-3 innings last year, he's issued just 11 free passes in 62 innings in 2021. He still leans heavily on his fastball but it sets up his slider and changeup very nicely, the latter of which opponents are hitting just .137 off him thus far.

The Astros are 5-1 in their last six games vs. a right-handed starter. Find more MLB betting trends for White Sox vs. Astros.

Both clubs are heading into this weekend set playing strong baseball, as the White Sox have won 10 of their last 13 games (including four straight series wins) while the Astros are 11-4 in their last 15 and have emerged victorious in five straight series.

They've been getting it done on both sides of the ball, as Houston and Chicago are second and sixth in MLB in runs scored in June, while sitting eighth and third in runs allowed. Both teams have also been getting great work from their bullpens this month (2.86 reliever ERA for Houston, 3.16 for Chicago), so we're really going to work to find an edge that separates these teams.

Chicago has been scoring runs, but it has come from hitting machine Tim Anderson, who is sporting a .389 average in June, along with help from rotation players as sluggers Yoan Moncada, Jose Abreu and Yermin Mercedes are all batting .211 or worse in June — and on-base machine Nick Madrigal (.440 OBP this month) just went down for the season following hamstring surgery.

The Astros, on the other hand, have had their top players delivering, as Michael Brantley is hitting .571 this month, while Kyle Tucker, Carlos Correa and Yuli Gurriel are all over .347 during this stretch. That will help mitigate the potential loss of third-baseman Alex Bregman, who could miss significant time with a quad injury... but does it even matter when Jose Altuve has eight home runs in 14 June games (an incredible stat considering he had 12 long balls in his previous 90 games dating back to the start of 2020)?

The White Sox offense has also been a little feast or famine, with 33 of their 74 runs this month coming in three games, while they've scored three or fewer five times in June. Compare that to Houston, which has scored at least five runs in 10 of its last 14 games, and the 'Stros offense is just a little more reliable with its star players seeing the ball well.

Add in that the Astros are a strong home team (22-13 on the year), and the White Sox have lost six of their eight visits to Minute Maid Park, and we're going to back the home side tonight.

We mentioned earlier that both of these third-year pitchers have been enjoying strong seasons, but neither has been untouchable — especially recently.

Three of Cease's last five outings have been strong, but his high BABIP really shines against strong contact teams. His last rough outing (3 1-3 IP, eight hits, six runs) was against Cleveland, which is a below-average offense in terms of runs but strikes out at the third-lowest rate in the Majors.

Well, Houston has the fewest whiffs in MLB and is third in BABIP, leading to the Astros sitting atop the league in runs per game and third in the AL in home runs. It's a bad matchup for Cease and means the Astros will likely hang a crooked number up today.

Will they get nine, however? That's a lot to ask, and despite most of the White Sox's stars being stuck in a mini-slump, Urquidy hasn't been at his absolute best lately. After allowing two runs or fewer in seven of his first nine starts, the righty has given up nine runs in his last two outings (six against Toronto, three against Minnesota), which has jumped his ERA from 3.02 to 3.77.

Urquidy throws his fastball (avg. velocity of 92.6 mph) about 54 percent of the time, and the ChiSox are one of the best teams against a straight fourseamer, sitting fifth in MLB in FanGraphs' wFB (runs created per 100 fastballs faced).

Chicago should be able to scratch a couple runs across as well, and that has us leaning toward this game finishing Over the total. 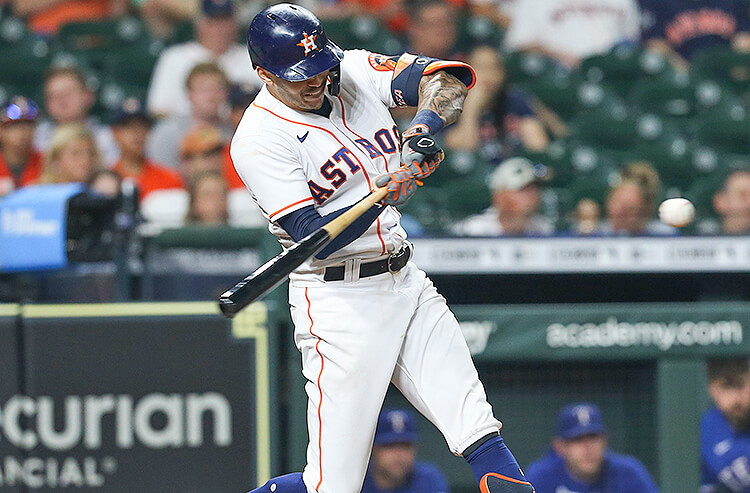 Astros vs Mariners Picks and Predictions: Runs at a Premium in McCullers-Flexen Duel
Zachary Cohen | Jul 27, 2021

Yankees vs Rays Picks and Predictions: McClanahan-Montgomery Round 2 Means Another Under Bet
Andrew Caley | Jul 27, 2021