Boston absolutely blew up Toronto starter Ross Stripling yesterday, and now faces a guy who is making his 2021 debut and has thrown just five innings in rehab starts all season. We're betting on another big BoSox night offensively — can the Jays keep pace?

The story continues to be the same for the Toronto Blue Jays: The young squad with big bats tends to feast on bad teams but the pitching just hasn’t been there against the league’s best.

That was evident last night when they fell behind 12-0 to the American League East-leading Boston Red Sox in the opener of this three-game set. The Blue Jays hope to bounce back in Game 2 but is there value in fading the MLB betting favorite?

Check out our MLB free picks and predictions for Red Sox vs. Blue Jays on Tuesday, July 20.

Garrett Richards (5-5, 4.91 ERA): The “sticky stuff” crackdown has maybe had a little bit of an effect on Richards. The right-hander has seen his RPMs go down drastically and over his last seven starts,y he has pitched to a 7.11 ERA with opponents hitting .361 off him.

Thomas Hatch (0-0, 0.00 ERA): This game was supposed to be started by rookie sensation Alek Manoah but a slip in the dugout has landed him on the IL, so instead Hatch makes his 2021 debut. The right-hander had a solid 2020 pitching to a 2.73 ERA in 17 games but has missed the entire season to this point with an elbow injury.

There is some messy weather in the forecast in Buffalo. There is a 75 percent chance of rain around first pitch and a chance of thunderstorms in the area. If the game is played there could also be a 10-12 mph wind gusting in from right field.

The Over is 7-0 in the Blue Jays' last seven games when facing a right-handed starter. Find more MLB betting trends for Red Sox vs. Blue Jays.

The Red Sox came into this matchup with the Blue Jays reeling a bit, having lost six of their previous eight games. But they were able to shake that off in the opener, jumping all over starter Ross Stripling early and never looking back in this AL East matchup.

The Red Sox looked more like the team we’ve been used to seeing all season, putting up 13 runs on 14 hits. The BoSox rank fifth in scoring, fourth in batting average, and sixth in OPS. Now, they go up against Thomas Hatch who is making his season debut.

Hatch uses a mix of a fastball, slider, and changeup and pitched fairly well against the Red Sox last season, allowing two runs on two hits in 4 2-3 innings over three relief appearances. But Boston looks like a different and more dangerous lineup this season and the Jays had to use seven relievers with Stripling only lasting a third of an inning.

While the Jays should have success against Garrett Richards (more on that in a moment), it’s hard to know what they will get out of Hatch. But he has only pitched five innings in his rehab assignment so you can expect a somewhat early call to the Jays bullpen and relying on a taxed bullpen (that is shaky to begin with) is never a good thing.

With the lineups and starters close to a wash, the deciding factor should be the bullpens — and the Red Sox have the much better one. That edge and the value has us betting the BoSox tonight.

The Over is just 5-5 in the 10 meetings between the Red Sox and Blue Jays this season but is 5-2 in the last seven contests — and we like the recent trend to continue. For starters, despite the O/U being an even 5-5 these teams have averaged 11 total runs scored per game in those 10 matchups.

We’ve also already spoken about how the Red Sox lineup has a chance to be successful in this matchup, but so will the Blue Jays. Toronto ranks second in scoring and batting average and ranks first in the MLB in home runs and OPS. Oh, and they have owned Richards.

The Blue Jays have gotten to the Red Sox righty for 10 runs on 22 hits while drawing 12 walks in 16 2-3 innings of work over three starts. Combine that with Richards’ recent funk and the Jays should be able to do their part to send this one Over the number. 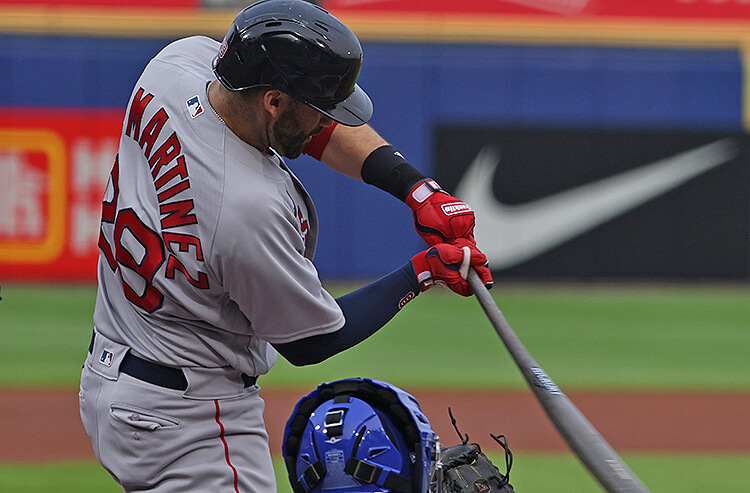