Red Sox vs Astros ALCS Game 6 Picks and Predictions: Can Houston Launch Into the World Series?

The Red Sox are on the brink of elimination, with the Astros looking to punch their ticket to the World Series with a win in Game 6. Find out if we believe a Game 7 is coming, or if Houston's headed back to the World Series, with our MLB betting picks. 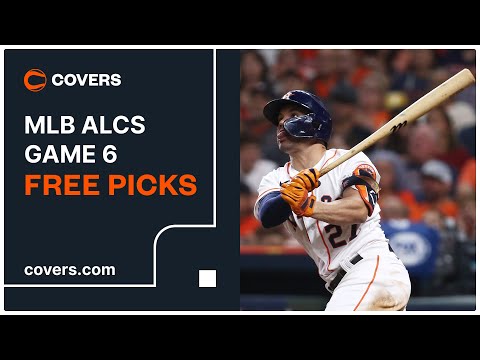 The Boston Red Sox are on the brink of elimination as they head back to Houston for Game 6 of the ALCS on Friday night. The Houston Astros jumped out to a 3-2 series lead with a comfortable victory on Wednesday, and MLB betting lines have them installed as -120 favorites to finish the series on Friday.

Here are our best free Red Sox vs. Astros picks and predictions for Game 6 of the ALCS on October 22.

Nathan Eovaldi (Postseason: 2-1, 5.51 ERA): Eovaldi came out of the bullpen in the ninth inning on Tuesday and promptly lost the game, surrendering four runs in less than an inning of work. The veteran had a solid regular season for Boston going 11-9 with a 3.75 ERA and 1.19 WHIP in 32 starts but has given up seven earned runs in just six innings during this series.

Luis Garcia (Postseason: 0-1, 24.55 ERA): Dusty Baker confirmed that Garcia would start in Game 6 despite leaving in the second inning of Game 2 with discomfort in his knee. Garcia surrendered a grand slam in the first inning of that contest and was rocked for five runs in 2 2-3 innings against the White Sox in his previous appearance this postseason. The 24-year-old did have a strong regular season, going 11-8 with a 3.30 ERA and a WHIP of 1.17 in 155 1-3 innings.

The Over is 11-1 in the Astros' last 12 games overall. Find more MLB betting trends for Red Sox vs. Astros.

The Astros broke out with a massive seven-run ninth inning in Game 3 and carried that momentum into Game 4, where they won by a final score of 9-1.

The Red Sox will send Nathan Eovaldi to the mound just three days after he was lit up by Houston's big bats in a relief appearance in Game 3. The right-hander has struggled against the Astros in this series and was also torched by them during the regular season, surrendering 11 hits and five runs in 5 2-3 innings when these teams met up in June.

That said, the Astros might not be in any better hands with their Game 6 starter Luis Garcia. The rookie's health is a bit of a question mark after he left his previous start early with a knee injury and he has been awful in each of his previous three starts, surrendering 15 hits and 16 runs in just 8 2-3 innings.

Both of these teams have stacked lineups and have been hitting the ball well during the playoffs. The Red Sox have an OPS of .872 and are plating 6.0 runs per game during the postseason while the Astros have a .790 OPS while averaging 6.89 rpg.

The Astros might have home-field advantage and the momentum heading into this contest but it's tough to rule Boston out. Keep in mind that the Red Sox led the league in batting average when trailing in games this season and that sort of resilience should serve them well when facing elimination.

With the Red Sox going 9-3 in their last 12 playoff games on the road and going 11-3 in their previous 14 postseason contests as an underdog, I'm leaning towards them as slim road dogs.

Every game of this series has cashed the Over and it's now 7-0 in the last seven meetings between these teams. And when one of these teams has issues generating runs, the other one goes off, as the 'Stros did in each of the past two contests and the Red Sox did in Game 3.

That shouldn't be any surprise for anybody who has been following baseball this season. The Astros led the majors in scoring, with 5.33 runs per game, while ranking second with an OPS of .784. The BoSox were right on their heels, ranking third in OPS (.777) and plating 5.12 rpg.

Both bullpens have handled a massive number of innings this series and have shown cracks, and those arms have to be getting worn out.

With the Astros going 11-1 O/U in their last 12 games and the Red Sox going 10-1 to the Over in their previous 11 contests, don't overthink this one and keep betting on those big bats.

Red Sox vs Astros ALCS Game 6 Picks and Predictions: Can Houston Launch Into the World Series?
Provided by