Rays vs Brewers Picks and Predictions: Low Bar to Clear Appealing for Over Bettors

Our MLB betting picks are siding with the Rays, as some slight advantages make them a valuable underdog. However, our best advice is to target the Over 7.5 — with both sides doing more than enough to get this Over the line.

The Tampa Bay Rays and the Milwaukee Brewers will wrap up an abbreviated two-game series at American Family Field on Wednesday afternoon.

The Brewers took the first half of this interleague set on Tuesday night, 5-3. Can the Rays force a split in this spot, or will Milwaukee complete the sweep?

Find out in our free MLB picks and predictions for Rays vs Brewers on Wednesday, August 10.

The Brewers opened as consensus favorites of -154, a line that’s drifted up no more than a few cents at the majority of sportsbooks. The total was unveiled at 7.5 and has stood pat so far, though most books are hanging significant juice on the Under.

Jeffrey Springs (4-3, 2.50 ERA): Jeffrey Springs saw his ERA jump from 1.45 to 2.70 after a series of five subpar starts between June 12 and July 29. However, he may have gotten himself back on the beam with six shutout innings against the Tigers on August 4. Springs has struck out 46 batters while walking only 10 over 43 2-3 innings on the road this year.

The Over is 15-3 in the Brewers’ last 18 Game 2s of a series. Find more MLB betting trends for Rays vs. Brewers

Rays vs Brewers picks and predictions

The Rays are being let go at too big a price here – there’s value to be had on their moneyline.

Jeffrey Springs gives Tampa a significant advantage early on in this game, as the southpaw takes on a Brewers lineup that’s 25th in OPS against lefties (.668) this season. One of the more dramatic splits on the team is that of Rowdy Tellez, who has hit 20 home runs against righties this season, but only two off lefties.

Springs – who has a solid 1.12 WHIP over 43 2-3 innings on the road this year – should set the Rays up nicely after five frames. From there, Tampa’s seventh-ranked bullpen by ERA this season (3.42) can pick up the slack.

Brandon Woodruff is having a solid season for Milwaukee so far but walks have been an issue of late, as he’s surrendered 14 free passes over his last 30 1-3 frames. Unfortunately for him, the Rays are fifth in bases on balls over the last two weeks.

Brandon Lowe and Randy Arozarena are the two most likely Tampa batters to gather the RBI in this tilt. Lowe leads his club with 12 runs driven in since the All-Star break, and he’s batting .267 in that span with three home runs. Arozarena is batting .286 but surprisingly has no four-baggers to his credit in this stretch.

Milwaukee no longer has the intimidating Josh Hader in the back of their bullpen, which ranks 19th by ERA on the season (3.86).

There are too many dangerous hitters in these lineups to back the Under on such a low line. Bettors should lean toward the Over in this one.

In addition to the Rays batters we already mentioned, David Peralta has been making an impact since joining this team at the trade deadline. He has a least one hit in six of his first seven contests with Tampa and two RBI.

Meanwhile, Kolten Wong has been on an incredible run for the Brewers since the All-Star break, producing a 1.081 OPS. He had two RBI in his team’s Tuesday night triumph over Tampa.

Not to be outshined in Christian Yelich, who has a .900 OPS in the second half while doing the bulk of his work from the leadoff hole.

The Rays’ bullpen has seen some mixed results since the All-Star break, with the most-worked Shawn Armstrong (eight appearances) authoring a 5.00 ERA. Colin Poche has a save and two holds but owns a 5.68 ERA in this sample.

The sooner former reliever Springs is chased, the more opportunities Milwaukee will have against some of manager Kevin Cash’s more vulnerable arms.

Meanwhile, the Brewers have been desperate enough to pick up 36-year-old veteran reliever Jake McGee and plug him into high-leverage situations since Hader departed – he owns a 6.35 ERA with the club.

Over bettors seem to be in a good spot in this one playing a generous line.

Springs may have Milwaukee on their back foot early, but he’s only averaged 4.92 innings per start in 2022. Once the southpaw exits, the Brewers’ eighth-ranked offense by runs per game (4.63) should rise to the fore.

Tampa’s lineup has been henpecked by injury in 2022, but Arozarena and Yandy Diaz can still give the opposition something to think about.

Woodruff appears to be getting too much credit from bookmakers and bettors, as he’s regressed from his best stuff in 2020 and 2021 while facing some less-than-stellar opposition in practically every start. Of his 85 innings on the mound this year, 28 1-3 have been against the Pirates. 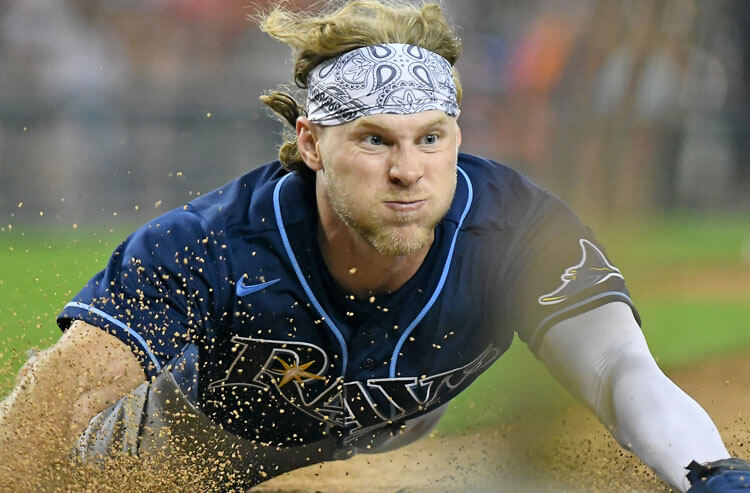 Rays vs Brewers Picks and Predictions: Low Bar to Clear Appealing for Over Bettors
Provided by