Julio Urias' season-long numbers are incredible and they've somehow been even better of late. In a pitcher's duel tonight with Zac Gallen, our MLB player prop picks for September 22 expect Urias to yet again pitch his best stuff.

We’ve got a great day of MLB action ahead of us on the diamond with 13 games on the betting board. That means plenty of options in the player prop market.

Today, there is some value on a strikeout prop for a surprisingly reliable Rockies starter. While Cubs outfielder Ian Happ is licking his chops for tonight’s matchup against the Pirates. And what is the best prop bet for the best pitcher’s duel on the board as Zac Gallen and the Diamondbacks visit Julio Urias and the Dodgers?

If you haven’t been paying attention to the Colorado Rockies, (which I don’t blame you for) it may be a little surprising to learn that Jose Urena has become a reliable starter for them. Well, he’s now a starter who can throw at least five innings.

The Rockies just need to get through the season with pitchers who eat innings, and Urena has been one of those guys. The right-hander has pitched into the sixth inning in six of his last eight starts and he’ll be asked to eat up some more innings tonight against the San Francisco Giants.

However, the fact Urena is pitching pseudo-deep into ball games and the matchup against the Giants is presenting us with a bit of value in the strikeout prop market.

Since coming out of the All-Star break, the Giants have just not been the same team and are looking lost at the dish right now. Their strikeout rate is the third-highest in baseball (25.6%) and it has been even worse of late, striking out in 28.7% of their at-bats since the start of September.

Urena’s strikeout prop number is on the board at 3.5 with the Over getting +125. He’s gone Over that number in each of his last two starts and in three of his last four and he’ll get a great chance to go Over once again vs. a Giants team that looks like it's lost its will to win in the second half of the season.

I am legitimately stunned at the value we are getting for Chicago Cubs outfielder Ian Happ to go Over his total bases prop when they visit the Pittsburgh Pirates tonight.

Happ is having a solid season for the Cubbies, hitting .271 with a .791 OPS with 17 home runs and 69 RBI. He’s also gone Over 1.5 four times in his last six starts and now gets a matchup he loves against Buccos’ starter Mitch Keller.

Keller has actually been solid for the Pirates this season but he is still giving up a .281 batting average and a .401 slugging percentage to opposing left-handed hitters this season (Happ is a switch hitter). And of course, Happ has just had Keller’s number over the course of their careers.

Happ owns a ridiculous .500 batting average in 14 at-bats against Keller, which includes a double, two dingers, and four walks. He just sees the ball really well coming out of Keller’s hand.

Mix in a Pirates bullpen that ranks dead last in MLB in ERA and I love Happ at this number to go Over his total bases tonight in Pittsburgh.

We will be treated to a fantastic pitcher’s duel in Chavez Ravine tonight as Zac Gallen and the Arizona Diamondbacks take on Julio Urias and the Los Angeles Dodgers.

While Gallen has been getting headlines with his recent scoreless innings streak and his 1.15 ERA in the second half of the season, it’s Urias we are looking at tonight.

With all the great players the Dodgers have and the fact they play on the West Coast, it’s easy to overlook just how dominant Urias has been. The southpaw owns a 2.27 ERA and is limiting opponents to a .196 batting average this season and it looks like he is peaking at the right time, dropping those numbers to 1.29 and .176 over eight starts since the beginning of August.

Tonight, he’ll stare across at a Diamondbacks lineup that has struggled against southpaws all season long, ranking 24th in batting average, 26th in OPS, and 28th in wRC+ when facing left-handed hurlers.

Urias also limited the D-Backs to one run on one hit over six innings all the way back on April 27 and has allowed one earned run or fewer nine times in his last 11 starts. Under 1.5 earned runs is always sweaty. But at plus money, backing Urias in this spot is worth the risk. 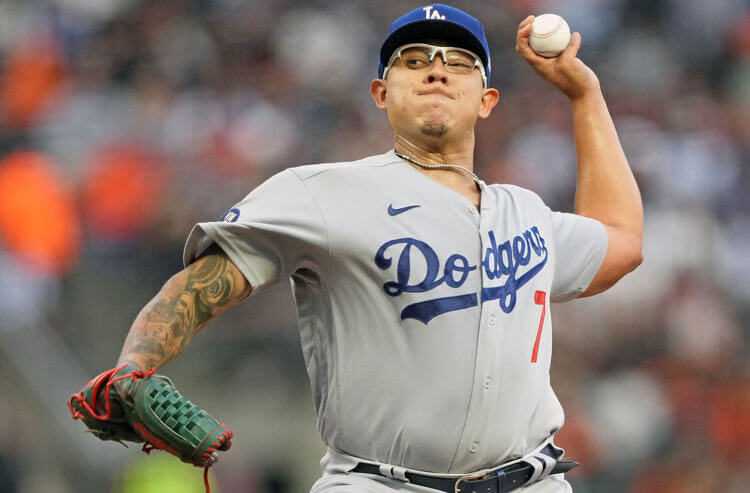