Mother's Day weekend is over, and the baseball action keeps on keeping on. For today's MLB betting player prop picks we love Brandon Woodruff to mow down some Reds, Chris Flexen to struggle on the mound, and Ketel Marte to keep his bat nice and toasty. 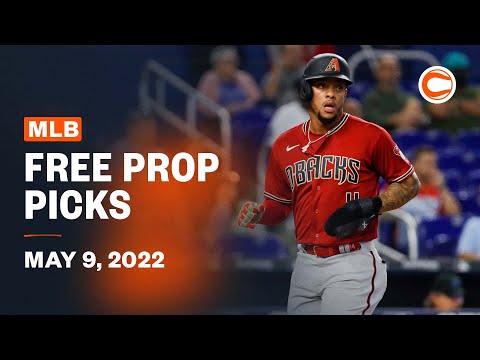 Another week of MLB action gets underway with 11 games on the diamond for baseball bettors to dive into. This means there is plenty of value to be found in the player prop market.

The Reds finally won a series, but don’t think that means we aren’t fading them in tonight’s opener against the Brewers. Meanwhile, the Phillies bats could be cracking tonight in Seattle and Ketel Marte is starting to heat up for the Diamondbacks.

Check out our MLB player prop picks for Monday, May 9, as we bank on some of the baseball's best to do their thing.

MLB props for May 9

Picks made on 5/9/2022 at 12:00 p.m. ET.
The odds widgets below represent the best odds currently available for each betting market at regulated sportsbooks.
Click on each pick to jump to the full analysis.

A) Brandon Woodruff, Chris Flexen, and Noah Syndergaard each Over 5.5 strikeouts BOOSTED to +1,000 at Caesars! Claim Now

Woodruff in his bag

The Cincinnati Reds won a series! Cincinnati took two of three games against the Pittsburgh Pirates over the weekend, and what is its reward? Another matchup with the Milwaukee Brewers. So, you can bet we’ll find a way to fade the Reds once again.

The Brewers come into this series having lost back-to-back games against the Atlanta Braves but they are still 19-10 and are leading the National League Central by 2.5 games. Now, they hand the ball to Brandon Woodruff for Monday.

Woodruff has gotten off to an inconsistent start this season with a 5.18 ERA, but has been a bit unlucky. The right hander has an expected ERA of just 3.17 while he is limiting opponents to an expected batting average of .215.

On top of that, his strikeouts are starting to rise again. Woodruff has racked up 27 strikeouts over his last 15 2-3 innings of work — including punching out 12 Reds in 5 2-3 innings when they last met in his previous start just back on May 3.

This isn’t that shocking, considering Cincinatti ranks 29th in strikeout rate so far this season, getting rung up 9.43 times per game. Woodruff has been mowing down Reds’ batters for the better part of his career. He has struck out eight or more Reds in five of his last six starts against them dating back to 2020, and getting even money at a number of 6.5 is too good to pass up.

Flexen gets flexed on

The Seattle Mariners were able to salvage a victory in their series finale against the Tampa Bay Rays on Sunday, but it was just their second win in the last 12 games.

On Monday night, they’ll begin a three-game interleague series against the Philadelphia Phillies. While the Phillies also just snapped a four-game losing streak, this is one of the most dangerous lineups in baseball and will be tough to navigate for Mariners' starter Chris Flexen.

While it looks like Flexen is building off a solid 2021 season by recording a 3.10 ERA and a 1.14 WHIP after his first five starts of the year, the advanced numbers paint a different picture.

The right-hander has an xERA of 5.14 while opponents have an xBA of 2.89 when facing him. Flexen has also seen his strikeout numbers dip quite a bit so far this season, striking out just 17 batters in 29 innings of work.

With Flexen surrendering five or more hits in four of his five starts this season he looks like a good bet to go Over his hits allowed prop against arguably the toughest lineup he has faced to this point in the year.

It is probably not a coincidence that the Arizona Diamondbacks have won six of their last eight ball games while Ketel Marte has started to heat up and do what he does best – hit the ball.

Marte got off to an ice-cold start at the plate, hitting just .135 over his first 20 games of the season, but you wouldn’t be able to tell that now. The switch hitter is in the midst of an eight-game hitting streak where he is batting .393 with a 1.235 OPS and seven extra-base hits.

Marte will look to keep that hitting streak going when he and the D-backs open a three-game set against the Miami Marlins and starting pitcher Elieser Hernandez.

Despite a 6.66 ERA, the 27-year-old Hernandez has a solid xERA of 3.80 and has an opponent .241 xBA. However, the right hander had trouble with this same D-backs team in his previous start, allowing five runs on five hits in four innings pitched. Marte went 2-for-2 with a double and two walks in that game.

Bet on Marte to keep swinging a hot stick in this one and take him to go Over 1.5 total bases — something he has done seven times during this eight-game hitting streak. Side note: You won't get plus money on Marte's total bases prop much longer.