On a very short slate, we're looking at the player prop market through the three evening games. Among them, we like the red-hot Tim Anderson to keep cruising against Yankees starter Luis Gil. That and a look at JT Brubaker and Freddie Freeman. 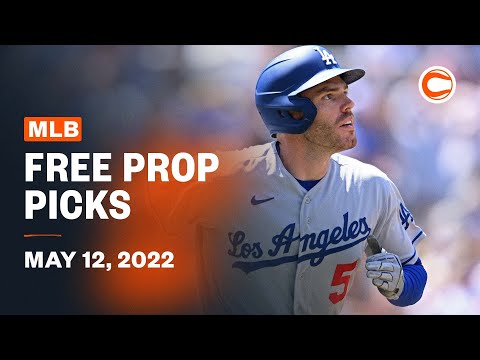 It’s a bit of a quiet day on the diamond with just eight games on the MLB schedule, including just four in prime time. But that doesn’t mean there isn’t plenty of baseball betting value to be found in the player prop market.

Today, we highlight the one man who can potentially slow down the suddenly white-hot Reds. We also consider if Tim Anderson can keep swinging a hot stick when the White Sox open a series with the Yankees, and are believers in Freddie Freeman, who gets a matchup with a familiar foe from his NL East days.

Check out our MLB player prop picks for Thursday, May 12, as we bank on some of baseball's best to do their thing.

MLB props for May 12

Watch out! Here comes the Cincinnati Reds! Well, kind of.

After losing 22 of their first 25 games (still can’t believe that), the Reds have now won four of their last six as they begin a four-game set against the Pittsburgh Pirates at PNC Park on Thursday night.

Two of those wins came against this same Pirates team last week, including a 9-2 win where the Reds plated seven runs in the bottom of the eighth to end a nine-game losing streak. But prior to that comeback, the Reds were getting dominated by Pirates starter JT Brubaker.

The 28-year-old right-hander has been surprisingly solid for the Buccos this season. Despite a 5.68 ERA, his expected ERA is a much more respectable 3.28 and he's limiting opponents to an expected batting average of .218.

Brubaker is also doing a decent job of racking up the strikeouts, punching out 30 batters in 25 1-3 innings. And in that game against the Reds, he struck out nine in just five innings of work. He’ll have a chance to keep that up tonight.

While Cincinnati has looked more like a professional baseball team of late, their 9.39 strikeouts per game rank dead last in MLB while ranking 27th in strikeout rate when facing right-handed pitching.

Brubaker has only gone Over this number twice in his first six starts, but he should be able to work at least five innings against a Reds team still hitting just .218 when going against righties. The plus money is the cherry on top.

The Chicago White Sox and New York Yankees begin an intriguing set at Guaranteed Rate Field tonight. The 22-8 Yankees are off to their best start in almost 20 years, while the White Sox offense has abandoned them in their 15-14 start to the year that can only be classified as disappointing.

But after winning seven of their last eight, the Pale Hose are hoping they have turned a corner. And while the offense that ranks 27th in scoring and 25th in OPS has let them down to this point this season, you can’t put that blame on Tim Anderson.

The guy just continues to do what he does best — hit the ball. Anderson is hitting .347 with a .912 OPS and is in one of his patented grooves.

Anderson has hits in 10 of his last 12 games, and multi-hit games in seven of those. He’s hitting .408 with a 1.045 OPS over that stretch and he’ll look to stay hot when he digs in against Yankees starter Luis Gil.

Gil is one of the Yankees' top pitching prospects, who is making a spot start tonight. He got called up last August and made six mostly solid starts. He’s a strikeout artist who punched out 38 batters in 29 1-3 innings last season but he has been really struggling in AAA in 2022.

On top of that, Anderson rarely strikes out, getting wrung up 11 times this season and just twice over this 12-game stretch.

Look for Anderson to take advantage of this matchup with an inexperienced starter and go Over 1.5 total bases, something he has done nine times in the last 12 games.

Freddie Freeman has been his regular old self with his new team, casually hitting .315 with a .911 OPS over his first 29 games in Dodger Blue. And Thursday night, he’ll face off against a familiar foe when he and the Dodgers host the Philadelphia Phillies.

Zack Wheeler gets the ball for the Phillies and Freeman has been a thorn in his side through the many years both played in the National League East. Heck, a thorn in Wheeler’s side may be downplaying it because Freeman has absolutely owned him.

Whatever you want to call it, Freeman just reads the ball well out of Wheeler’s hand. He has 21 hits in 48 at-bats while drawing 15 walks compared to just 11 strikeouts against Wheeler over the course of his career. That’s a .438 batting average to go along with a 1.208 OPS. And that is not a small sample size.

Wheeler has been solid this season, posting a 3.14 expected ERA while giving up a mediocre .240 expected batting average to opponents. And with Freeman hitting .324 with a .885 OPS when facing right-handed pitching this season, he looks like a solid bet at this value to go Over his total bases tonight.