Southpaws are the theme of today's best MLB prop bets. We have a lefty that struggles to strike opponents out, a hot slugger with a good matchup against a southpaw, and baseball's best lefty this month continuing to deal in a divisional matchup.

It's a lighter day on the MLB schedule, with just seven games to kick off the week. That doesn't mean we can't find some great MLB prop bets and value plays to fatten your bankroll!

Today we're going to look at a low-strikeout starter continuing to not generate Ks, a red-hot slugger with a favorable matchup, and one of baseball's hottest pitchers continuing to dominate on the West Coast.

Here are our best MLB prop bets, picks, and predictions for Monday, August 23.

It's been a generally rough season for Texas lefty Kolby Allard, although he has improved his play in August, pitching at least six innings in all three starts and giving up just seven combined earned runs across 18 1-3 innings.

One thing Allard has not done, however, is strike out many batters. The 23-year-old chucker has just 79 punchouts in 94 innings on the season and has just nine Ks in August. Allard has a K total of 3.5 for today's afternoon matinee against the Boston Red Sox, a number he's failed to hit in five of his last seven starts.

Add in that Boston also has the sixth-fewest strikeouts in the American League over the last month — and has averaged 3.2 strikeouts against starters over its last 10 games — and we're going to bank on Allard not ringing up many Red Sox today.

The Atlanta Braves have been on fire in August, winning 16 of 18 games and sitting second in the MLB in home runs and fourth in runs scored — despite being without megastar Ronald Acuna Jr.

Atlanta has been relied on contributions from all over the lineup — including outfielder Jorge Soler, who has been raking since being acquired from the Kansas City Royals. After posting a .288 on-base percentage in KC, Soler is batting .257 with a .378 OBP in the ATL. He's has recorded a hit in 13 of his 20 games with Atlanta, including five of his last six, and gets a favorable matchup in Yankees' lefty Jordan Montgomery tonight.

Montgomery has been solid for New York, but he does give up close to a hit per inning and is susceptible to the long ball. Soler has been batting second in Atlanta's order recently and being protected by stars Freddie Freeman and Austin Riley means he's getting good pitches to attack on a nightly basis. Factor in that he's better against southpaws and it seems like solid value for him to have another productive game tonight.

Seattle southpaw Marco Gonzales has quietly been on a roll over the last two months. After giving up 10 earned runs in two starts in early July, the 29-year-old Gonzales has two or fewer runs in six straight outings, including just two total earned runs in four August starts (27 innings) — dropping his ERA from 6.00 to 4.10.

He'll look to keep rolling against an Oakland squad that while sitting third in the Majors in runs against LHP on the season, has not really lit up lefty starters as of late. The A's have scored two or fewer earned runs in four of their last starts games against a southpaw starter and have just three combined runs in two starts against Gonzales this season (9 2-3 total innings).

With tonight's game taking place at a pitcher's park in RingCentral Coliseum — the A's have scored the ninth-fewest runs and allowed the 10th-fewest runs at home — we're loving the plus-money value on Gonzales to continue his stretch of dominant pitching. 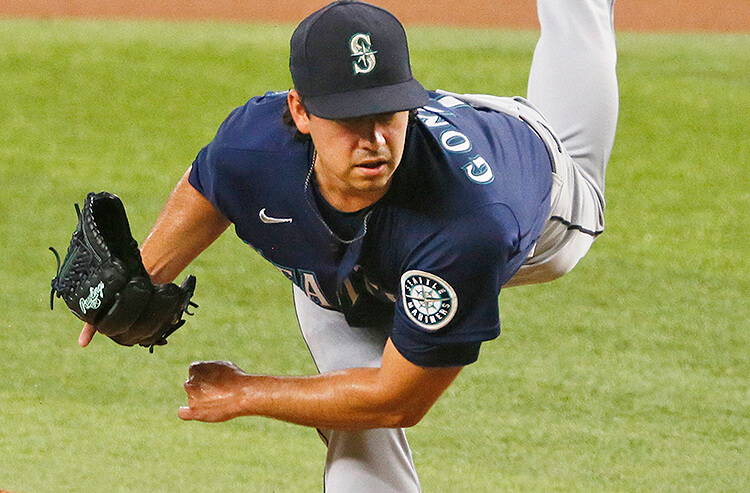