Mets vs Phillies Game 2 Picks and Predictions: Philly Falters as Runs Pile Up

Between Saturday's conditions and the pitchers on the mound, we're bound to see runs when the Mets and Phillies face off. See why Bailey Falter's likely in for a rough outing as our MLB betting picks break down this matchup.

It's another pivotal National League divisional duel when the New York Mets meet the Philadelphia Phillies.

The second tilt of this doubleheader will take place on Saturday night in a nationally-televised game. The Mets were reasonably dominant in their win last night: They grabbed an early lead and rode it to a 7-2 victory. As a result, they now hold an 11-game divisional lead over Philly entering today.

Who will snag Game 2? Find out our MLB picks and predictions for Saturday, August 20, 2022.

The Mets opened up as muted -105 favorites. Since then, they have taken more money and dropped to -120, with the Phillies returning at +106.

David Peterson (6-2, 3.30 ERA): Peterson comes into today off one of his best performances of the season when he went just over five scoreless innings against the Atlanta Braves. Peterson has been slightly lucky to have the ERA he's had, with an xERA that sets at 4.04. In addition, Peterson has a hard-hit rate that sits near the bottom 30% in baseball, along with an exit velocity and barrel rate that follow.

However, Peterson can overcome some of those issues because of his elite strikeout rate and ability to induce the ground ball at an above-average rate. Peterson uses a good mix of the fastball and slider.

Bailey Falter (0-3, 4.85 ERA): The numbers for Falter aren't kind. He has an xERA of 5.30, near the bottom of qualified pitchers in baseball. Along with that, Falter has similar exit velocity issues to his opponent, with a hard-hit rate that ranks in the bottom half in baseball and an exit velocity in the Bottom 10%.

Unfortunately, there aren't many positive things to say about Falter at the moment — his primary two pitches both have a negative run value, which is a troubling sign for what could come next. His last time out, he gave up two earned runs against the Pittsburgh Pirates in six innings.

Mets are 23-5 in their last 28 Game 3s of a series. Find more MLB betting trends for Mets vs. Phillies

Mets vs Phillies picks and predictions

The last time Bailey Falter faced off against this New York Mets side, he was hit hard. He gave up five runs — though only two were earned — including one home run, and lasted just three innings. It's just tough to see it going differently this time, which makes the -125 price incredibly hard to turn down. I'm going to roll with the Mets here.

Peterson will give up some runs; it's hard to deny that. But he should do a decent job keeping the Mets in the game. That's because some of the things they do play to his strengths. For example, Philly has the sixth-highest chase rate and 10th-highest swing rate in baseball. The foundation of Peterson's game is creating swings and misses or chases on pitches outside the strike zone. So, in other words, it's a natural strength of the pitching vs. a direct weakness of the hitting. You have to like that.

On the other side, there's not much that Falter does that makes you think he'll have success against this lineup. I've spoken extensively throughout the season about what makes the Mets good and who they have success against. One thing that results in a high success rate is when they are up against flyball pitchers. All of their slash numbers jump up, and, anecdotally, it feels like they rarely lose against them.

My projections don't see much of an edge here, so this is not something I'm going to go crazy on. But, with that side, I think this is a rare case of an average pitcher against a bad one. So, I'll take the average one.

This is a side I feel much more confident jumping in on — I'm happily grabbing the Over here.

We have the perfect conditions at Citizens Bank Park for runs tonight. It will be hot and humid, and the winds will blow out. Ballpalpark.com estimates that these conditions are suitable for increased runs by 12%. But with the flyball hitters filling both of these lineups, that doesn't even feel enough.

Alongside that, we have two pitchers that aren't awe-inspiring. Peterson is the better of the two, but there are multiple hitters in this Phillies lineup with a good history against him. In addition, just like his opponent, he produces an above-average rate of fly balls. So, whether it's Peterson or Falter giving them up, home runs must be expected.

We have some history on our side as well here:

My projections give us about a 10% edge here. They have both teams scoring over four runs about 65% of the time. So, I'm happy about taking the Over.

The ball should be flying around Citizens Bank Park tonight, given the quality of pitchers and the conditions in Philly. Because of that, I have to make the Over my Best Bet.

We've talked about the quality of pitchers in this matchup, but it can't be stressed enough just how run-friendly they've been this season. Add the fact that both could see regression, and you have to expect fireworks. When you also consider conditions will be favorable for those fireworks, it becomes a clear Best Bet. Take the Over tonight in Philly. 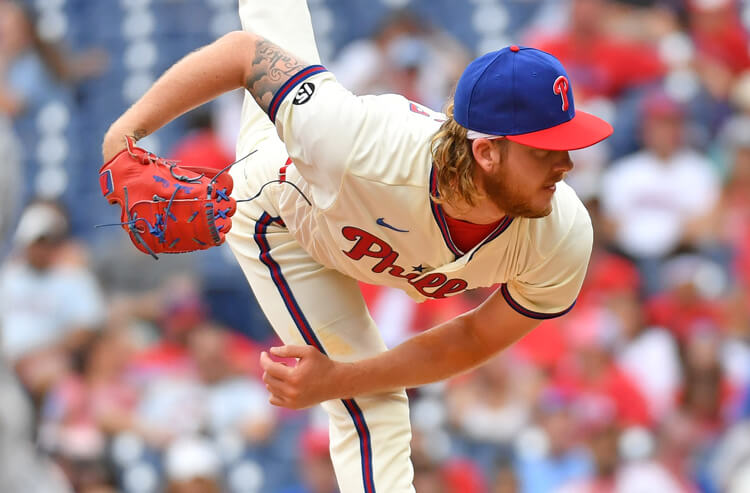 Mets vs Phillies Game 2 Picks and Predictions: Philly Falters as Runs Pile Up
Provided by