Dodgers vs Giants Picks and Predictions: Standing on Shoulders of Giants

The Dodgers can gain ground on the MLB-leading Giants as they face-off tonight, and having Trevor Bauer toeing the rubber gives them a great advantage.

Heading into the 2021 MLB season, the National League West was all about the Los Angeles Dodgers and the San Diego Padres, but the San Francisco Giants had different plans and have crashed the party.

The Giants don’t just lead the NL West, they have the best record in baseball as well, making this weekend’s series against the Dodgers all the more intriguing. And the opener should be a doozy with Trevor Bauer toeing the rubber against Alex Wood.

Check out our MLB free picks and predictions for Dodgers vs. Giants on Friday, May 21, with first pitch scheduled for 9:45 p.m. ET.

Trevor Bauer (4-2, 2.20 ERA): Bauer has been worth every penny to this point. The defending NL Cy Young Award winner has carried over his 2020 dominance into 2021. The right-hander has looked unhittable for the most part this season. His WHIP of 0.75 is better than it was a season ago and he's limiting opponents to a ridiculously low .146 batting average.

Alex Wood (5-0, 1.75 ERA): Wood has kick-started his career by The Bay. The former Dodger has found his All-Star form and hasn’t allowed more than two earned runs in any of his six starts this season. He also owns a 0.94 WHIP to go along with that low ERA, limiting opponents to a .197 batting average.

The Under is 5-0 in Dodgers' last five road games against a left-handed starter and is 6-2 in Giants' last eight games when facing a right-handed starter. Find more MLB betting trends for Dodgers vs. Giants.

Both the Dodgers and Giants come into this game playing well. The Dodgers have won four in a row and eight of their last nine games overall, while the Giants have won five straight and eight of 10. So, where is the betting value?

Well, right off the bat, you’re not going to get too many opportunities to bet Trevor Bauer as just a -120 favorite. The Dodgers’ right-hander is not only one of the best pitchers in baseball, but also one of the most reliable.

Bauer has pitched at least six innings in seven of his last eight starts and has allowed two runs or fewer in each of those outings. Now, he faces a Giants’ lineup that ranks 24th in batting average against right-handers.

While Wood’s numbers are as good if not better than Bauer’s in some areas, there is one thing you can question about them. The level of competition. Wood has faced the Marlins and Rockies twice, the Rangers and the Pirates, all poor-hitting teams.

With the Dodgers' bats starting to get in a groove, it’s too hard to pass up on this value with Bauer.

It shouldn’t be surprising to see a total of 7 between two hot starting pitchers. In fact, we’re lucky not to see 6.5 at this point.

As noted, Bauer is dealing right now and is the type of pitcher who can give the Giants’ hitters fits. Not only does he rarely give up hits, but he is also striking out 12.1 batters per nine innings while the Giants rank 24th in strikeouts, getting punched out 9.75 times per game.

On the other side, just because Wood hasn’t faced a lineup as dangerous as the Dodgers doesn’t mean he can’t be effective. The lefty is mixing his sinker, slider and change excellently this season and has been very hard to barrel up, creating a ton of soft contact.

With the Dodgers ranking 26th in batting average against left-handers this season and the intensity expected in this series, we like this one to stay below the number. 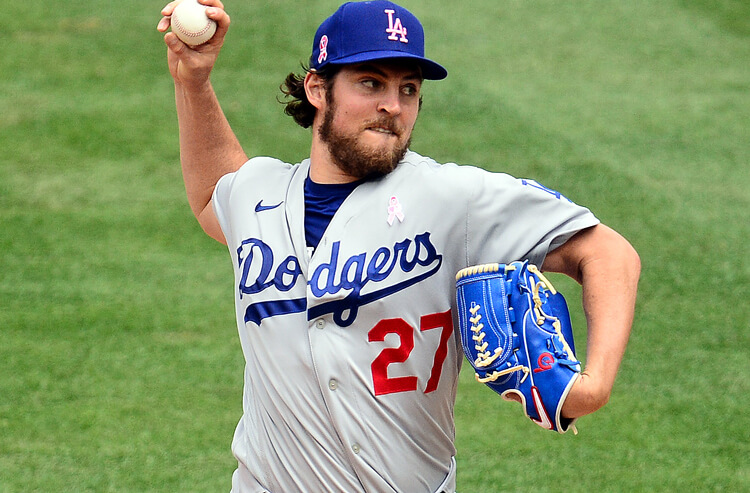 Dodgers vs Giants Picks and Predictions: Standing on Shoulders of Giants
Provided by